pronunciation (help·info); known as Masulipatnam under British rule and as Bandar in folklore) is a city and a special grade municipality in the Krishna district, Andhra Pradesh, India. It is located 347 kilometres (216 mi) south east of state capital, Hyderabad. 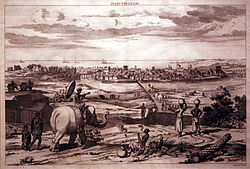 View of Masulipatnam in 1676

The town has existed since the 3rd century BCE (Satavahana period) when, according to Ptolemy, it was known as Maisolos. The Periplus of the Erythraean Sea calls it Masalia in the 1st century CE.[2] The port is located on the southeastern, or Coromandel Coast, of India. Situated in the mouth of the River Krishna on the Bay of Bengal, the Masula port saw flourishing sea trade. The East India e Company built its first factory in India in Masulipatnam. It was a 17th-century port for French, British and Dutch trade. The port has a medium-size fishing harbour which can accommodate 350 fishing vessels and an active carpet-weaving industry. The other products from the town include rice, oilseeds and scientific instruments. This town is a railway terminus and an important educational centre.

The area is vulnerable to storm surges caused by the frequent cyclones in the Bay of Bengal. The 2004 Tsunami affected many fishing villages around Machilipatnam. The Government and NGOs are involved in rebuilding and reconstructing devastated villages.

Machilipatnam city gets annual rainfall due to the southwest monsoon. The climate is tropical in nature with hot summers and moderate winters. The hottest months are between April and June. The average normal rainfall in the district is 102 cm.

Machilipatnam city is frequently hit by cyclones originating in the Bay of Bengal. On 8 December 2004, a high capacity S-Band Doppler radar meant for cyclone warning was installed, commissioned and made operational at the city.[4] It was purchased from a German manufacturer, Gematronik. The Andhra Pradesh coast between Ongole and Machilipatnam is vulnerable to high surges of the sea due to cyclones. The Andhra Cyclone of 14–20 November 1977 crossed the coast near Nizampatnam and took approximately 10,000 lives. As the storm approached the coast, gale winds reaching 200 km/h lashed Prakasam, Guntur, Krishna, East Godavari and West Godavari districts. A storm surge, 5 meters high, inundated Krishna estuary and the coast south of Machilipatnam city (Bandar)

With the installation of the radar, the state will be better equipped to track cyclones by the onset of monsoon, according to an official from the State Met Office talking to the newspaper The Hindu. This facility will monitor 960 km long coastline of the state.[5] The radar's information is posted real-time on the Indian Meteorological Department website.[6] Similar radars were installed in other coastal cities forming an S-Band Cyclone Detection Radar Network.[7]

For administrative purposes, Machilipatnam falls into the Bandar revenue division of the Krishna District. It is a special grade municipality with 36 panchayats and 28 villages. The city area covers an area of 28 kilometres (17 mi). Machilipatnam is a parliament constituency in Andhra Pradesh. It is governed by the Collector and the District Magistrate of the Krishna district.It is the first municipality in Andhra Pradesh, followed by Tenali. 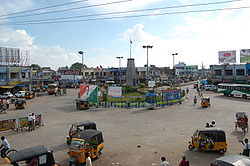 Machilipatnam has big industries. Fashion gold (also called rolled gold or gold covering) ornaments produced there. Agriculture is the most important occupation, with rice being the main food crop. Bharat Electronics Limited (BEL), a unit of the Union Defence Ministry, of the Government of India, operates a manufacturing unit in Machilipatnam.[8] BEL is involved in design, development and manufacture of electronic equipment that are used by the Indian Defence Services and paramilitary organisations. It[who?] also produces cyclone detection radar under the IMD[clarification needed] Department of Science and Technology.

The city is well-known for sweet dishes called Bandar Laddu and Bandar Halwa.

The literary organisation "Saahithee Mitrulu" was established in Machilipatnam in 1981 by Dr. Ravi Ranga Rao. It has conducted literary and cultural programmes since then without pause, functioning chiefly to bring out the creative skills of youth and new writers; it has published at least 66 books of literature and treating of language and culture. In 1999, the organization conducted the "Sathaavadhaanam" of Rallabandi Kavitha Prasad, created a history.[10][11][12]

The Kalamkari fabrics of Machilipatnam and Kalahasti, with their intricate designs, are used in clothing and wall hangings. Kalamkari refers to dye-painted cloths and the technique used to create them. Their name derives from kalam, for a pen-like tool used to draw outlines on the cloth, and kari (work). Fabrics are outlined with a cotton-tipped bamboo stick and dyed in vegetable or mineral colours. The process involves washing, rinsing, soaking and bleaching muslin, and applying mordants and dyes using natural substances like indigo for blue, madder for red, mango bark and dried myrobalan fruit for yellow, palm sugar and rusted iron for black. The dyeing process is very elaborate and can take several days to complete. While some pieces are hand-drawn, large canvas and sheets are block-printed. The work done in Machilipatnam, often using block printing in conjunction with hand painting, features decorative floral and vegetable designs that appealed to local kingdoms and to export trade. This culminated in European demand for Machilipatnam chintz, which derives its name from the Hindi word chint (spotted). There are so many families developed kalamkari art. the famous persons made an effort for developing these art is Anumukonda Venkatarangayya Naidu etc...And Machilipatnam is also famous for imitation jewellery whisch is also called as "Chilakalapudi Bangram", it has over 150yrs of production and business, over 200 companies are dependent on this and over 30000 artizans are working for it. Most of the jewellery used in cinemas of south India are from here itself, the jewellery is also exported to many countries like Dubai, Singapore, Malysia etc...Some of the companies to name here are Nandi Gold Covering, Kohinoor Gold covering,Uma gold covering,Ajanta Gold Covering,Raja Gold Covering,Konark Rolled Gold Company,Jyothi Gold Covering, Sagar Gold Covering Works and many.

Machilipatnam is a city with a rich history of foreign conquests, business and trade. The relics of Bandar Kota (Machilipatnam Fort) can be visited. The old light house is still standing. 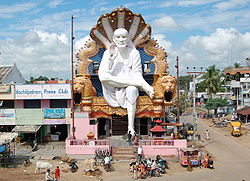 Sai Maharaj Devalayam at the district court centre of Machilipatnam is the main attraction of the town. It has the biggest statue of Sri Saibaba of Shirdi. The Indian Book of Records has recognised it as the "Tallest Saibaba statue" by Shri.BLV Rao and Shri.Srinivas Kishan on 25th August 2011. Dattashram is a pilgrimage site on the coast. Dattashram has an ancient Shiva temple and a recently built Datta temple. Manginapudi is popularly known as "Datta Rameswaram" due to the consecration of 12 wells for bathing (recalling those at Rameswaram).[13] Panduranga Swamy temple at Chilakalapudi near the city, is a famous pilgrimage site. It is a temple of Lord Vishnu, said to be similar to the temple at Pandaripur. Sivaganga Temple is a historical temple maintained by Challapalli jameendars rather than the Government. It is one of the oldest temples in the area. Located on the Avanigadda road, it attracts tourists and devotees all through the year. On Shivaratri major celebrations are carried out by the temple trustees. Anjaneya Swami Temple, in Paraspet, was built by Samarth Ramdas, the guru of Chatrapathi Sivaji. Ghantasala, 21 km from Machilipatnam, has the remains of an old Buddhist stupa. Agastheeswara Temple, 36 km from Machilipatnam, is a temple of Lord Shiva and pilgrimage site. At this temple Lord Shiva is called by the name Ekaratri Mallikarjunaswamy. An annual festival is celebrated here and the deities are taken out in procession. At Gudivada, North west of Machilipatnam, visitors are attracted by the old ruins of the stupas. Further up the coast of Machilipatnam there are five temples dedicated to Lord Shiva. These ancient temples are located at Amravati, Samalkot, Bhimavaram, Draksharama and Chebrolu. Prasanna Anjaneya Swamy temple, located at Godugupet, has a history of over hundred years.

The beaches in Machilipatnam city are long, broad, pristine, with pale blonde sands. Palletalapalem Beach, a beach side fishing hamlet 11 km from Machilipatnam, is well known for its scenic beauty and also as a historic port city. During its heyday this port served as a gateway to India. The beach has a natural bay with shallow waters. Sri Ganganamma Temple is constructed in the year of 1977 when the great cyclon came i.e. uppena at Rajupet,Machilpatnam. Near Palletalapalem, Sree Ramalam temple is 2 kilometers.

Machilipatnam is well connected to important cities of India. Nearest city is Vijayawada, south central railway's important railway station and junction. There are eleven passenger trains to Vijayawada, one fast passenger to Visakhapatnam and three express trains to Secunderabad, Tirupathi and Bangalore.

Navayuga won GO to build Sea port in Machilipatnam. Currently government is in the process of acquiring land for the port development.

The nearest airport is Gannavaram airport near Vijayawada, about 70 km away.

The city receives television and radio transmissions from Hyderabad and the rest of country. All major print media are in circulation. The major Telugu dailies include the Eenadu, Surya, Vaartha, Andhra Jyoti, Andhra Bhoomi, Saakshi and Andhra Prabha. The major English dailies are The Deccan Chronicle, Business Standard, The Hindu, The Times of India, The Indian Express and The Economic Times.

Machilipatnam is an educational center, offering all the academic courses except Medicine. It has public (state-run) and private-run schools. The local Hindu college and allied institutions offer KG to PG level of education. There are several Telugu language and English language schools. Daita Madhusudhana Sastry, the former secretary and correspondent of the Hindu college and allied institutions was instrumental in the establishment and expansion of most of the educational institutions in Machilipatnam.