Olympiastadion is a stadium located in Munich, Germany. Situated at the heart of the Olympiapark München in northern Munich, the stadium was built as the main venue for the 1972 Summer Olympics.

Until the construction of the Allianz Arena for the 2006 World Cup, the stadium was home to Bayern Munich and TSV 1860 Munich. Today, the Olympiastadion holds 69,250.[1]

Designed by the German architect Günther Behnisch and the engineer Frei Otto, the Olympiastadion was considered revolutionary for its time. This included large sweeping canopies of acrylic glass stabilized by steel cables that were used for the first time in a large scale. The idea was to imitate the Alps and to set a counterpart to the 1936 Summer Olympics in Berlin, held during the Nazi-Regime. The sweeping and transparent canopy was to symbolize the new, democratic and optimistic Germany. This is reflected in the official motto: "The Happy Games" ("Die Heiteren Spiele").

The stadium was built by Bilfinger Berger between 1968 to 1972 in a pit made by bombings Munich suffered during World War II that made construction easy.[2][3] 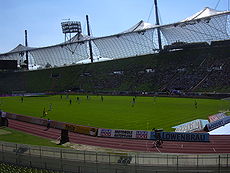 Following the Olympics, the stadium became the home of FC Bayern Munich, with their rival TSV 1860 Munich moving in during the 1990s. These two teams coexisted in the Olympiastadion until 2005, when both clubs moved to the purpose built Allianz Arena.

Since 2005, it is the host of the yearly air and style snowboard event.

On December 31, 2006, the stadium made history as being the first venue to host the Tour de Ski cross country skiing competition. The individual sprint events, held at 1100 m, were won by Norway's Marit Bjørgen (women) and Switzerland's Christoph Eigenmann (men). The snow was made in the stadium by combining the hot air with the cold refrigerated water that causes the snow to act like the icy type you would see in the Alps.

It went unused in the 2006 FIFA World Cup due to the Allianz Arena being the host stadium in Munich.

On June 23 to June 24, 2007, the stadium played host to the Spar European Cup 2007, a yearly athletics event featuring the top 8 countries from around Europe.

In 2010, it was announced that a round of the DTM touring car series will hold a stadium event in 2011. The Race of Champions-style event will be a non-championship scoring round, but the entire 2011 grid will take part over a two-day period.

The stadium was one of the venues for the 1974 FIFA World Cup.

The following games were played at the stadium during the World Cup of 1974:

The stadium was one of the venues for the UEFA Euro 1988.

The following games were played at the stadium during the Euro 1988:

In addition to being a sports venue, the stadium have played host to many open-air concerts. Guns N' Roses filmed parts of their Estranged video there when they visited Munich in June 1993. Depeche Mode recorded their show at the stadium on June 13, 2009 for their live albums project Recording the Universe.

Parts of the 1975 film Rollerball were shot on the (then) futuristic site surrounding the stadium.

The Olympic Stadium also hosted Motorcycle speedway when it held the 1989 World Final on September 2, 1989. Denmark's Hans Nielsen won his second World Championship with a 15 point maximum from his five rides. The late Simon Wigg of England finished in second place after defeating countryman Jeremy Doncaster in a run-off to decide the final podium places after both had finished with 12 points from their five rides. Three time champion Erik Gundersen of Denmark finished in fourth place with 11 points.