The stadium was opened in October 1961, as the District of Columbia Stadium. It is owned and operated by the Washington Convention and Sports Authority (WCSA).

The stadium was home for a number of major professional sports teams, including the NFL's Washington Redskins (1961 through 1996; moved to FedExField in suburban Maryland), the American League's Washington Senators (1962 through 1971; moved to Arlington, Texas and renamed Texas Rangers), and the National League's Washington Nationals (2005 through 2007; moved to Nationals Park). It has hosted international soccer matches in the 1994 FIFA World Cup, 1996 Summer Olympics and 2003 Women's World Cup.

The stadium was renamed in January 1969, for U.S. Senator and presidential candidate Robert F. Kennedy, who had been assassinated in Los Angeles the previous June. As Attorney General, Kennedy's Justice Department played a role in the racial integration of the Washington Redskins: along with Secretary of the Interior Stewart Udall, Kennedy threatened to revoke the team's lease at the federally-owned stadium until it promised to sign African American players.

RFK was the first major stadium designed specifically as a multisport facility for both football and baseball.

During the Nationals' tenure at the stadium, it was the fourth-oldest active stadium in Major League Baseball behind Fenway Park, Wrigley Field and Yankee Stadium.

RFK Stadium was home for 36 seasons to the Redskins, whose return to prominence as a football power began the same year (1960) that the original baseball Senators played their final season, relocating in 1961 to Minnesota as the Twins. The Redskins' first game in D.C. Stadium was a 24-21 loss to the New York Giants on October 1, 1961. The team's first win in the stadium was over its future archrival, the Dallas Cowboys, on December 17, 1961. This was the only win in a 1–12–1 season, and it came on the final weekend of the regular season. The Redskins' last win at RFK was a 37–10 victory over the Cowboys on December 22, 1996.

Another notable baseball moment occurred in a Cracker Jack Old Timers game in 1982, when 75 year-old Hall of Famer Luke Appling hit a home run. Although he had a .310 lifetime batting average, Appling only hit 45 home runs in 20 seasons. However, because the stadium had not been fully reconfigured, it was just 260 feet (79 m) to the left-field foul pole, far shorter than normal.

In its tenure as the Senators' home field, RFK Stadium was known as a hitters' park. Slugger Frank Howard, a six-foot-seven-inch tall, 255-pound left fielder, hit a number of tape-measure home runs in his career, a few of which landed in the center field area of the upper deck. The seats Howard hit with his home runs are painted white, rather than the gold of the rest of the upper deck. Howard also hit the last home run in the park's original tenure, on September 30, 1971. With one out remaining in the game, a fan riot turned a 7–5 Senators lead over the New York Yankees into a 9–0 forfeit loss. However, in its tenure as the Nationals' home field, RFK has been known as a pitchers' park. While Howard hit at least 44 home runs for three straight seasons (1968–70), the 2005 Nationals had only one hitter with more than 15 home runs, José Guillén with 24.

The stadium's design was nearly circular, attempting to facilitate both football and baseball. It was the first to use the so-called "cookie-cutter" concept, an approach also used by Philadelphia, New York, Houston, Atlanta, St. Louis, San Diego, Cincinnati, Oakland and Pittsburgh. Except for the stadiums in Houston, San Diego, and Oakland (the former is still standing but is no longer actively used, while the latter two are still active), RFK Stadium ultimately outlasted all of the aforementioned stadiums.

However, as would become the case with every other stadium where this was tried, the design was not ideal for either sport due to the different shapes and sizes of the playing fields. As the playing field dimensions for football and baseball vary greatly, seating had to accommodate the larger playing surface. In the case of RFK Stadium, this resulted in the first ten rows of the football configuration being nearly at field level, making it difficult to see over the players.

As a baseball park, RFK was a particular target of scorn from baseball purists, largely because it had no lower-deck seats in the outfield. The only outfield seats are in the upper deck, above a high wall. It was said that RFK was "the first ballpark built that had only an upper deck." According to Sporting News publications in the 1960s, over 27,000 of RFK's 45,000 baseball seats were in the upper tier or mezzanine levels. The lower-to-upper proportion improved for the Redskins, with end-zone seats filling in some of the gaps.

A complex conversion was necessary, at a cost of $40,000 per switch, to convert the stadium from a football/soccer configuration to baseball and back again; in its final form, this included rolling the 3rd-base lower-level seats into the outfield along a buried rail, dropping the hydraulic pitcher's mound 3 feet (0.91 m) into the ground, and laying sod over the infield dirt. Later facilities were designed so the seating configuration could be changed much more quickly and at a lower cost. The conversion was only required several times per year during the Senators' joint tenancy with the Redskins, but became much more frequent while the Nationals and D.C. United shared the stadium during the mostly-concurrent MLB and MLS seasons; in 2005, the conversion was made more than 20 times. Originally the seats located behind the stadium's third-base dugout would be removed for baseball games and put back in place when the stadium was converted to the football (and later soccer) configuration. When these sections were in place, RFK seated approximately 56,000 fans. Following the Washington Nationals' move to RFK in 2005, this particular segment of the stands was permanently removed to facilitate the switch between the baseball and soccer configurations. These seats were not restored following the Nationals' move to Nationals Park, leaving the stadium's seating capacity at approximately 46,000. D.C. United do not normally make the tickets for the majority of the upper-level seating available for purchase, and the stadium's reduced capacity thus is not normally problematic for the club.

During the years when the stadium was used only for Redskins games, the rotating seats remained in the football configuration. If a baseball game was scheduled, the left-field wall was only 250 feet (76 m) from home plate, and for some exhibition baseball games, a large screen was erected.

Some of RFK's quirks endear the venue to fans and players. The large rolling bleacher section is less stable than other seating, allowing fans to jump in rhythm to cause the whole area to bounce. Also, because of the stadium's design and the proximity of the fans to the football field, the stadium was extremely loud when the usual sell-out Redskins crowds became vocal. Legend has it that former Redskins coach George Allen would order a large rolling door opened in the side of the stadium when visiting teams were attempting field goals at critical moments in games so that a swirling wind from off the Potomac and Anacostia rivers would interfere with the flight of the kicked ball. 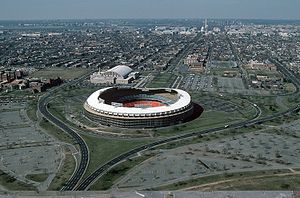 Aerial photo of the stadium in 1988 facing the Capitol.

Since the stadium is on a direct sight line with the Washington Monument and the United States Capitol, light towers were not allowed; instead, arc lights were placed on its curved, dipping roof. 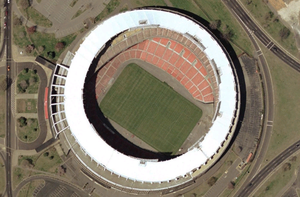 Satellite view of stadium in pre-2005 soccer configuration; the darker red seats at the northwest end are not part of the current setup.

The dimensions of the baseball field were 335 feet (102 m) down the foul lines, 380 feet (120 m) to the power alleys and 408 feet (124 m) to center field during the Senators' time. The official distances when the Nationals arrived were identical, except for two additional feet to center field. After complaints from Nationals hitters it was discovered in July 2005 that the fence had actually been put in place incorrectly, and it was 394.74 feet (120.32 m) to the power alleys in left; 395 feet (120 m) to the right-field power alley; and 407.83 feet (124.31 m) to center field. The section of wall containing the 380-foot (120 m) sign was moved closer to the foul lines to more accurately represent the distance shown on the signs but no changes were made to the actual dimensions.

The stadium was opened in October 1961 as the District of Columbia Stadium (D.C. Stadium for short). The stadium was renamed in January 1969, for U.S. Senator and presidential candidate Robert F. Kennedy, who had been assassinated in Los Angeles the previous June. As attorney general, Kennedy's Justice Department played a role in the racial integration of the Redskins. Along with Secretary of the Interior Stewart Udall, Kennedy threatened to revoke the team's lease at the federally owned stadium until it promised to sign African American players.

On April 14, 2005, just before the Nationals' home opener, the D.C. Sports and Entertainment Commission announced an agreement with the Department of Defense under which the military would pay the city about $6 million for naming rights and the right to place recruiting kiosks and signage in the stadium. In return, the stadium would be dubbed Armed Forces Field at RFK Stadium. This plan was dropped within days, however, after several prominent members of Congress questioned the use of public funds for a stadium sponsorship. Similar proposals to sell the naming rights to the National Guard, ProFunds (a Bethesda, Maryland investment company) and Sony were rumored that season, but no agreement was ever finalized. 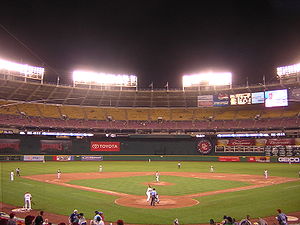 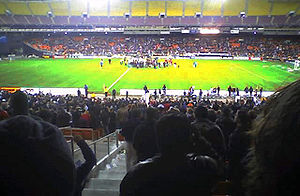 D.C. United after their win in the 2004 MLS Eastern Conference finals 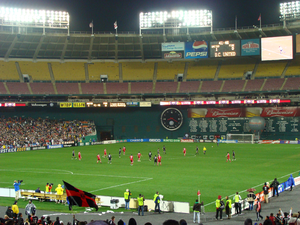 RFK Stadium during a D.C. United soccer match in March 2009

The United States Men's National Soccer Team has played more games at RFK Stadium than any other stadium in the world.[22] Some have suggested that due to the nature of RFK and its quirkiness that it would be a suitable national stadium if US Soccer were ever to seek one out.[23][24] Several prominent members of the national team have scored at RFK including: Brian McBride, Cobi Jones, Eric Wynalda, Joe-Max Moore, Clint Dempsey, Michael Bradley, and Landon Donovan. Winners are listed first and all games are friendlies unless otherwise noted.

During the Redskins' tenure, the Washington Hall of Stars was displayed on a series of white-and-red signs hung in a ring around the stadium's mezzanine, honoring D.C. sports greats from various sports. With the reconfiguration of the stadium, it was replaced by a series of dark-green banners over the center-field and right-field fences in order to make room for out-of-town scoreboards and advertising signage. There are 15 separate panels honoring 82 figures. Nationals Park also hosts a smaller version of the display.

RFK Stadium is within a half-mile and easily accessible from the Stadium-Armory station of the Washington Metro. The station is served by the Blue and Orange Lines, and will add the Silver Line in the future. It is also served directly by Metrobus lines B2, D6, E32 (at Eastern High School), 96 and 97.

RFK Stadium is home to such eateries as: