The Stadio Olimpico is the main and largest sports facility of Rome, Italy. It is located within the Foro Italico sports complex on the north of the city. An asset of the Italian National Olympic Committee, the structure is intended primarily for football. It is the home stadium of Serie A clubs Lazio and Roma, the venue of the final Coppa Italia, the home venue of the Italian national rugby union team and Italy's national athletics stadium. It also occasionally hosts concerts of pop music and events of various kinds.

Throughout its history, the Stadio Olympico has undergone several substantial restructurings and a complete restyling:

In its first stages, the Stadio Olimpico was called the Stadio dei Cipressi. It was designed and constructed within the larger project of the Foro Mussolini (Mussolini Forum), which was renamed Foro Italico after the war.

Construction work began in 1927, under the direction of Turinese engineer Angelo Frisa and architect Enrico Del Debbio, and was finished, after few variations, in 1932. The construction of masonry stands wasn't foreseen, the original stands consisted of grassy terraces.

In 1937 the construction of a second tier of stairs was started, but the work was interrupted in 1940 due to the outbreak of the war.

On December 1950, the site was reopened for the completion of the stadium. The project was entrusted to the engineer Carlo Roccatelli, a member of the Superior Council of Public Works. At first, they thought of a stadium with a more complex structure than that actually realised,[citation needed] but the scarcity of funds and the environmental characteristics of the area led to a less ambitious version. On the death of Roccatelli in 1951, the direction of the work was entrusted to architect Annibale Vitellozzi. It now reaches a capacity of about 100,000 people (hence the name of Stadio dei Centomila, which the stadium was called before 1960), and in view of the XVII Olympiad. The building was inaugurated on 17 May 1953 with a football game between Italy and Hungary.

During the 1960 Summer Olympics, the stadium hosted the opening and closing ceremonies, and the athletics competitions. The posts were eliminated in the feet, with the result to actual capacity to 65,000 spectators.[2] Following hosted several editions of the Italian Championships in Athletics, the 1975 Summer Universiade (the stadium was the only venue in the Universiade), and the 1987 World Athletics Championships and still hosts the annual meeting of the Golden Gala.

The main feature of the stadium was its surprisingly low elevation from the ground, despite its considerable capacity. The result was achieved thanks to partial sottoelevazione of the pitch, also exploiting the natural shape of a hollow ground around it. Thanks to these measures, the system was integrated seamlessly with the surrounding environment, providing a very pleasing visual appearance and content. The seats were originally made of wood, later replaced by others in stone pale green. This was not a cover of stairs, with the exception of a small structure, which was added later, that in addition to cover a small part of the Tribuna Monte Mario, which hosted journalists for Radiocronaca and press rooms. The main criticism in these years was the poor views from the curva caused by the large distance from the pitch. This was due to the presence of the athletics track and the need to conform to the existing structure.

1990 restructuring and coverage of the stadium 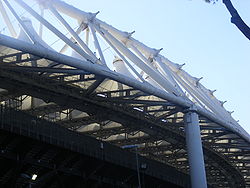 The new coverage added during the '90s.

In view of the 1990 FIFA World Cup, which was the Olympic main Stadium, the facility was the subject of an extensive enhancement. Because of the work in 1989 of the Capitoline teams Lazio and Roma played their internal competitions at Stadio Flaminio. The work was entrusted to a team of designers, including the original designer Annibale Vitellozzi. From 1987 to 1990, the plan of action was amended several times, with a consequent rise in costs. Ultimately, Olimpico was entirely demolished and rebuilt in reinforced concrete, with the exception of the Tribuna Tevere expanded with the addition of further steps, the curves were closer to the field of nine metres. All sectors of the stadium were covered with full coverage in tensostructure white. Also installed were backless seats in blue plastic, and two giant screens built in 1987 for the World Athletics Championships were also mounted inside the curve. At the end of the new version of Olimpico had 82,911 seats, and so was the 14th stage in the world for number of seats in the stadiums used for football, the 29th among all the stages and the second in Italy, to just behind the San Siro Stadium of Milan. The restructuring works, with the result of an undoubtedly impressive and fascinating, not kept account of the surroundings. The rise of the stairs, as well as coveragestravolsero fully the principles on which the previous stage was designed and constructed.

The Stadio Olimpico was host to five matches in which the Italian National Team took part in, and the final between West Germany and Argentina. West Germany won the final match 1–0.

By the same conformation of 1990, on 22 May 1996, the Stadio Olimpico hosted the UEFA Champions League Final between Juventus and Ajax, which saw the Bianconeri prevail in a penalty shoot-out.

2008 restyling of the stadium 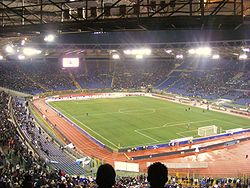 Interior of the stadium.

In 2007, it was engaged in a vast plan of restyling inside the stadium to conform to UEFA standards, for the 2009 UEFA Champions League Final, which was disputed in Rome. The work was performed and completed in 2008, having included the establishment of standard structures, with improvements in security, the adjustment of dressing rooms and press room, the complete replacement of the seats, installing high definition LED screens, the partial removal of plexiglas fences between spectators and the field, and a reduction of posts, until the current capacity of 72,698. In order to increase the comfort of the audience, a part of the modernisation of the stadium were the increase of the points of rest and adjustment to a toilet. These actions have allowed the Stadio Olimpico to be classified as UEFA Elite stadium.

Rome is currently bidding to host the 2020 Summer Olympics. Should Rome be selected to host the games, the Stadio Olimpico would host the athletics events, the men's football final as well as the opening and closing ceremonies.

Panorama of Stadio Olimpico during the 2011 Coppa Italia Final

The stadium has a current capacity of 72,698, distributed as follows:[3]

The average season attendances from league matches held at the Stadio Olimpico for Lazio and Roma. [4]

# In 1989–90 season both teams played at Stadio Flaminio during the renovations of Stadio Olimpico.
* Club was in Serie B