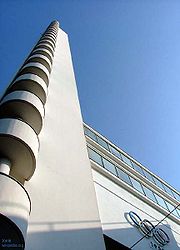 The tower of the Olympic Stadium 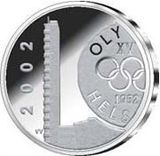 The Helsinki Olympic Stadium (Finnish: Helsingin olympiastadion; Swedish: Helsingfors Olympiastadion), located in the Töölö district about 2 kilometres (1.2 mi) from the center of the Finnish capital Helsinki, is the largest stadium in the country, nowadays mainly used for hosting sports events and big concerts. The stadium is best known for being the center of activities in the 1952 Summer Olympics. During those games, it hosted athletics, equestrian show jumping, and the football finals. It was built however to host the 1940 Summer Olympics, which were moved from Tokyo to Helsinki before being cancelled due to World War II. The stadium was also the venue for the first World Athletics Championships in 1983 as well as for the 2005 World Championships in Athletics. It is also the home stadium of the Finland national football team.

Construction of the Olympic Stadium began in 1934 and it was completed in 1938. The Olympic was designed in functionalistic style by the architects Yrjö Lindegren and Toivo Jäntti. The stadium was completely modernized in 1990–1994 and also renovated just before the 2005 World Championships in Athletics. Its spectator capacity was at its maximum during the 1952 Summer Olympics with over 70,000 spectator places. Nowadays the stadium has 40,000 spectator places. During concerts, depending on the size of the stage, the capacity is 45,000–50,000.

The tower of the stadium, a distinct landmark with a height of 72 metres (236 ft), is open for visitors and offers impressive views over Helsinki. It is possible to see into the adjacent Sonera Stadium.

An American TV series, The Amazing Race 10, had one of its episodes ending at The Olympic Stadium Tower in 2006. As a task, teams had to do a face-first rappel (known as the Angel Dive) down the Helsinki Olympic Tower.

Since March 2007, a Eurasian Eagle-Owl has been spotted living in and around the stadium. On June 6, 2007, during a Euro 2008 qualifying match, the owl delayed play by ten minutes after perching on a goalpost. The owl was later christened Bubi and was named as Helsinki's Resident of the Year.

A Youth Hostel is located within the Stadium complex.