The Ricoh Arena (commonly known as The Ricoh), home to Coventry City F.C., is a stadium complex situated in the Rowleys Green district of the city of Coventry, England containing a 32,609 seater football stadium, a 6,000 square-metre exhibition hall, a hotel, a leisure club, and a casino. The site is also home to Arena Park Shopping Centre containing one of the largest Tesco Extra hypermarkets. The site was previously home to the Foleshill gasworks. It is named after its sponsor, Japanese company Ricoh who paid £10million deal for the naming rights over ten years.[3] For the 2012 Summer Olympic Games and the 2015 Rugby World Cup, where stadium naming sponsorship is forbidden, the stadium will be known as the City of Coventry Stadium.[4][5]

The arena was opened officially by Dame Kelly Holmes and Sports Minister Richard Caborn on 24 February 2007. This was after the arena had been open for a year which included hosting a sell out England under 21 football match against Germany and a full season of Coventry City football matches. 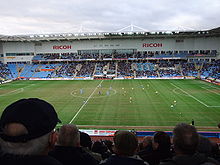 The decision to relocate Coventry City from Highfield Road to a new stadium – with a larger capacity and better road links and parking facilities – was made in 1997 by the club's then chairman Bryan Richardson. It was anticipated that the new stadium would be ready for the 2000–01 season.[6]

Permission for the ground's construction was given in the spring of 1999, with a targeted completion date of August 2001. This deadline was not met by almost four years – the final gas holder wasn't demolished until September 2002.

The original design for the arena was for a state-of-the-art 45,000 capacity stadium with a retractable roof, and a pitch that could slide out to reveal a hard floor for concerts. If the plan for a 45,000-seat stadium had gone ahead, it would have given the Sky Blues one of the biggest club stadia in Britain.

After Coventry City's relegation in May 2001, a number of contractor/financier withdrawals and England's bid to host the 2006 World Cup finals ended in failure, the plans were significantly downsized to reflect new realities, and by the summer of 2002, there were plans for a more basic 32,500-seat stadium in its place.

On Friday 6 October 2006, the Arena hosted its first international football game when the England U-21 team played the German U-21 team in the first leg of a European U21 Championship qualifying play-off. England won the game 1–0, with the winning goal scored by Leighton Baines.

The name comes from a sponsorship deal, reported to be worth £10 million[7] over 10 years with camera and photocopier manufacturer Ricoh, though during construction the stadium was variously referred to as the Jaguar Arena, Arena Coventry, and Arena 2000.

The sponsorship deal with Ricoh came about after the stadium's initial sponsor, the motor firm Jaguar, was forced to pull-out due to the same financial difficulties that had caused the controversial closure of the large Jaguar assembly plant at the city's Brown's Lane, previously a major source of employment in Coventry. On 4 August 2004, 12 months before the stadium's opening, it had been announced that the new stadium would be called the Jaguar Arena in a deal worth up to £7million until 2015. However, the deal was cancelled on 17 December 2004.[8]Ricoh's sponsorship of the new stadium was confirmed on 26 April 2005.[9]

The Arena is run by Arena Coventry Limited (ACL) and is separate from the running of Coventry City Football Club who are the Arenas first tenants. It was funded largely by Coventry City Council & the Higgs Charity, a charity (of which CCFC and ACL director Sir Derek Higgs was a trustee), and includes shopping facilities, a casino, exhibition halls and a concert venue.

At the end of the 2008–09 Championship season in May 2009, the stadium had still not achieved a capacity 32,600 crowd. The stadium's highest attendance for a home game was an FA Cup match against Chelsea in 2009. This game was technically a sellout as the fan segregation took up a whole block and all available tickets were sold.

The Ricoh Arena was the first cashless stadium in the United Kingdom, with customers using a prepay smartcard system in the grounds bars and shops.[10] However, for the 2010–11 football season, one third of the bars and kiosks will accept cash.[11]

On 28 July 2011 a bronze statue of Jimmy Hill was unveiled at the entrance to the stadium.[12]

The stadium is situated on the northern side of Coventry, less than 1 mile south of junction 3 of the M6 motorway, on the A444 road from Coventry to Nuneaton. Although officially designated as being situated in the Foleshill district, it is in fact located in the small suburb of Rowleys Green, between two larger suburbs, namely Holbrooks to the west, and Longford to the east. However, the stadium was constructed on the former site of the 'Foleshill' gasworks complex, although the Foleshill district itself begins more than a mile to the southeast. The stadium is located within a quarter-mile of the boundary with Nuneaton and Bedworth and the county of Warwickshire. It is next to the Arena Park Shopping Centre.

The arena became the venue for Coventry City FC's[13] home games at the start of the 2005–06 season, following 106 years at the Highfield Road stadium. The first competitive football match played at the Ricoh Arena was against Queens Park Rangers on 20 August 2005, in front of a reduced (for safety reasons) 23,012 capacity crowd. The game ended 3–0 to Coventry, with Claus Bech Jørgensen becoming the first player to score at the arena. Hull City became the first away team to win at the Ricoh, snatching a 2–0 win on 24 September 2005, with both goals coming from John Welsh.

The first concert held at the arena was Bryan Adams on 23 September 2005. The bar in the Eon Lounge, overlooking the pitch, was named 'The Bryan Adams Bar' after the Canadian rocker. Bon Jovi played there live on 7 June 2006 (35,000 attendance), as did Red Hot Chili Peppers on 2 July 2006 (40,000). For both the Bon Jovi and Red Hot Chili Peppers concerts, the fans were able to stand on the pitch. The venue played host to the Heineken Cup semifinal match between Northampton Saints and London Wasps on Sunday 22 April 2007. London Wasps (who went on to win the cup) also played at the Ricoh Arena in the Heineken Cup again against Munster on 10 November 2007 narrowly winning 24–23. Saracens have announced that they will play their semi final against Munster at the arena. The stadium hosted its first ever American football game on 6 May 2007, when the Coventry Cassidy Jets beat then British national champions London Olympians 27–20.[14] The Jets had hoped to play their inaugural EFAF Cup game against Madrid Bears on 29 April but they were forced to change venue. The Heineken Cup the previous week to the Madrid game had led to CCFC objecting in case of damage to the pitch.[15]