The Estádio do Maracanã (Brazilian Portuguese: [eʃˈtadʒiu du maɾakɐˈnɐ̃]), officially Estádio Jornalista Mário Filho, is an open-air stadium in Rio de Janeiro, Brazil. Owned by the Rio de Janeiro State Government, it is named after the Maracanã neighbourhood in Rio de Janeiro. It was opened in 1950 to host the FIFA World Cup, and in the final game Brazil was beaten 2-1 by Uruguay. Since then, it has mainly been used for football matches between the major football clubs in Rio de Janeiro, including Botafogo, Flamengo, Fluminense, and Vasco da Gama. It has also hosted a number of concerts and other sporting events. Although the paid attendance at the final game of the 1950 FIFA World Cup was 199,854 (being the world's largest stadium by capacity, when it was inaugurated), the stadium currently seats 82,238 spectators.[1] It was the main venue of the 2007 Pan American Games, hosting the football final and the opening and closing ceremonies.

Over time, however, the stadium also has become a multi-character space to receive other events such as shows and games from other sports, such as volleyball. After several works of modernization, the current capacity of the stadium is 82,238 spectators, making it the largest stadium in Brazil and South America.

The Maracanã is currently closed for renovations and upgrades, and will reach a total capacity of around 85,000 spectators in preparations for the 2013 FIFA Confederations Cup, the 2014 World Cup, the 2015 Copa America, the 2016 Summer Olympics, and the 2016 Summer Paralympics. The stadium's reopening is forecasted for early 2013.

The official name of the stadium, Mário Filho, was given in honour of the late carioca journalist, brother of Nelson Rodrigues, who stood out in supporting the construction of Maracanã.

But the popular name is derived from the Rio Maracanã, which crosses the Tijuca through St Kitts, flowing in the Mangue Channel before the drainage system in the Guanabara Bay. In Tupi-Guarani the word Maracana means "like a rattle". Due to the construction of the stadium, was created in the Maracanã where the stadium is located was originally part of Tijuca. In this area city there were various birds, coming from Northern Brazil, known as Chestnut-fronted Macaw.

The construction of Maracanã was criticized by Carlos Lacerda, then Congressman and political enemy of the mayor of the city, general Ângelo Mendes de Morais, for the expense and for the chosen location for the stadium, arguing that it was built in Jacarepagua. Still, supported by journalist Mário Rodrigues Filho, Mendes de Morais was able to move the project forward. At the time, a horse racing arena stood in the chosen area. The competition for the work was opened by municipality of Rio de Janeiro in 1947, with the construction contract awarded by engª Humberto Menescal, and architectural contract awarded by Michael Feldman, Waldir Ramos, Raphael Galvão, Oscar Valdetaro, Orlando Azevedo, Pedro Paulo Bernardes Bastos, and Antônio Dias Carneiro. The works commenced on August 2, 1948, with the laying of the cornerstone. 1,500 workers constructed the stadium, with an additional two thousand working in the final months. Despite having come into use in 1950, the works were only completed in 1965.

The stadium's inauguration took place with the completion of a friendly football match between the teams of Rio de Janeiro and São Paulo on June 16 of 1950, São Paulo won by 3 to 1. Fluminense Midfielder Didi scored the stadium's first goal for Rio.

Built for the 1950 World Cup, the Maracanã's first official match was in that competition on June 24, 1950. The game saw Brazil defeat Mexico 4-0, with two goals from Ademir and one each from Baltasar and Jair. The match was refereed by Englishman George Reader.

Five of Brazil's six games at the tournament were played at the Maracanã (the exception being their 2-2 draw with Switzerland). For the final, 199,854 fans were officially registered (with 173,850 paying). Brazil was beaten 2-1 by Uruguay. This defeat on home soil is a significant event in Brazilian history, being known popularly as the Maracanazo.

After winning the right to host the 1950 FIFA World Cup, the Brazilian government sought to build a new stadium for the tournament. The plans for the stadium were drawn up by seven Brazilian architects, Miguel Feldman, Waldir Ramos, Raphael Galvão, Oscar Valdetaro, Orlando Azevedo, Antônio Dias Carneiro and Pedro Paulo Bernardes Bastos.[2] The first stone was laid at the site of the stadium on August 2, 1948.[3] With the first World Cup game scheduled to be played on June 24, 1950, this left a little under two years to finish construction. However, work quickly fell behind schedule, prompting FIFA to send Dr. Ottorino Barassi, the head of the Italian FA, who had organized the 1934 World Cup to help in Rio de Janeiro.

The opening match of the stadium took place on June 16, 1950. Rio de Janeiro All-Stars beat São Paulo All-Stars 3-1; Didi became the player to score the first ever goal at the stadium.[4] Despite hosting a match, the stadium was still unfinished. It lacked toilet facilities and a press stand, and still looked like a building site. It was said that the stadium could house 200,000 standing spectators, making it one of the largest stadiums in the world at the time.[citation needed] Despite the stadium's unfinished state, FIFA allowed matches to be played at the venue, and on June 24, 1950, the first World Cup match took place. Brazil beat Mexico with a final score 4-0, with Ademir becoming the first scorer of a competitive goal at the stadium with his 30th minute strike. 81,000 spectators attended the game. Eventually, Brazil progressed to the final round, facing Uruguay in the final match of the tournament on July 16, 1950. Brazil only needed a draw to finish top of the group, but Uruguay won the game 2-1, shocking and silencing the hundred thousands who attended the game. This match has since been known as the "Maracanazo". The official attendance of the game was 199,854, with the actual attendance estimated to be about 210,000.[5][6]

On March 21, 1954 a new official attendance record was set in the game between Brazil and Paraguay, after 183,513 spectators entered the stadium with a ticket and 177,656 in Fla-Flu (1963). In 1963, stadium authorities replaced the square goal posts with round ones, but it was still two years before the stadium would be fully completed. In 1965, 17 years after construction began, the stadium was finally finished.

Since the World Cup left Brazil in 1950, the Maracanã Stadium has mainly been used for club games involving four major football clubs in Rio— Vasco, Botafogo, Flamengo and Fluminense. The stadium has also hosted numerous domestic football cup finals, most notably the Copa do Brasil and the Campeonato Carioca.

On July 19, 1992, an upper stand in the stadium collapsed, leading to the death of three supporters and 50 more being injured.[7] Following the disaster, the stadium's capacity was greatly reduced as it was converted to an all-seater stadium in the late 1990s. Despite this, the ground was classified as national landmark in 1998, meaning that it could not be demolished. The stadium hosted the first ever FIFA Club World Cup final match between Vasco da Gama and Corinthians, which Corinthians won on penalties.

Following its 50th anniversary in 2000, the stadium underwent renovations which would increase its full capacity to around 103,000. After years of planning and nine months of closure between 2005 and 2006, the stadium was reopened in January 2007 with an all-seated capacity of 82,238.

The stadium is part of a complex that includes an arena known by the name of Maracanãzinho, which means "the Little Maracanã" in Portuguese.

Internal view of the Maracanã stadium with a small crowd, minutes before the first match of the 2010 Brazilian Football Championship between Flamengo and São Paulo.

For the World Cup in 2014, it is running a major reconstruction project that involves an expansion of the stadium's roof, which will cover all seats inside the stadium, unlike the current design, where protection is given from the seats of the bleachers above the gate access of each sector. In addition, the grayish tone returns to the main color of the stadium, the original seating bowl, with a two-tier configuration, will be demolished, giving way to a new seating bowl, possibly with a single level of luxury boxes on one side and a couple of levels on the other. The old level of boxes, which were installed above the stands for the 2000 FIFA Club World Cup, were dismantled in the reconstruction process.

The reconstruction project will also prepare the stadium to host the opening and closing ceremonies and the football finals of the 2016 Summer Olympics, and the opening and closing ceremonies of the 2016 Summer Paralympics.[8] The model of the new design of Maracanã Staduim; http://www.fifa.com/worldcup/photo/photolist.html#1513253 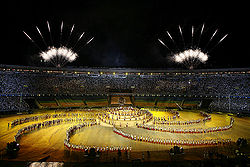 The stadium in the 2007 Pan American Games Opening Ceremony.