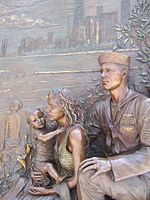 Sculpture of a sailor and his family, gazing eastward, over Lake Michigan

Soldier Field (formerly Municipal Grant Park Stadium) is located on Lake Shore Drive in Chicago, Illinois, United States, in the Near South Side. It is home to the NFL's Chicago Bears. It reopened on September 29, 2003 after a complete rebuild (the second in the stadium's history).

Origin of name and design model

The field serves as a memorial to American soldiers who had died in past wars, hence its name. It was designed in 1919 and completed in the 1920s. It officially opened on October 9, 1924, the 53rd anniversary of the Great Chicago Fire, as Municipal Grant Park Stadium, changing its name to Soldier Field on November 11, 1925. Its formal dedication as Soldier Field was on Saturday, November 27, 1926, during the 29th annual playing of the Army vs Navy game.[8] Its design is modelled on the Greco-Roman architectural tradition, with doric columns rising above the stands. However, after being rebuilt, the modern stands now dwarf the columns.

In its earliest configuration, Soldier Field was capable of seating 74,280 spectators and was in the shape of a U. Additional seating could be added along the interior field, upper promenades and on the large, open field and terrace beyond the north endzone, bringing the seating capacity to over 100,000. The largest crowd for any event at Soldier Field is difficult to determine. Please see "Notable Events" below for specific events.

Although used as the site for many sporting events and exhibitions, it was not until September 1971 that the Chicago Bears first made it their home. They previously played at Wrigley Field, best known as the home of the Chicago Cubs baseball team. Seating capacity was reduced to 55,701 by building a grandstand in the open end of the U shape. This moved the field closer to both ends at the expense of seating capacity. The goal of this renovation was to move the fans closer to the field. Beginning in 1978, the plank seating was replaced by individual seats with backs and armrests. In 1982, a new press box as well as 60 skyboxes were added to the stadium, boosting capacity to 66,030. Fifty-six more skyboxes were added in 1988, increasing capacity to 66,946. Capacity was slightly increased to 66,950 in 1992. By 1994, capacity was slightly reduced to 66,944.[8]

AstroTurf replaced the grass in 1971, when the Bears moved to the stadium. Grass returned for the 1988 football season.

In 2001, the Chicago Park District, which owns the structure, faced substantial criticism from the Chicago Tribune when it announced plans by Architect Benjamin T. Wood to alter the stadium. Proponents, however, argued the renovation was direly needed citing aging and cramped facilities.

View of east side and marina

Reaction to the renovation was mixed. The New York Times ranked the facility as one of the five best new buildings of 2003,[9] while the Chicago Tribune architecture critic Blair Kamin dubbed it the "Eyesore on the Lake Shore."[10]

On September 23, 2004, as a result of the 2003 renovation, a 10-member federal advisory committee unanimously recommended that Soldier Field be delisted as a National Historic Landmark.[11][12] The recommendation to delist was prepared by Carol Ahlgren, architectural historian at the National Park Service's Midwest Regional Office in Omaha, Nebraska. Ahlgren was quoted in Preservation Online as stating that "if we had let this stand, I believe it would have lowered the standard of National Historic Landmarks throughout the country," and, "If we want to keep the integrity of the program, let alone the landmarks, we really had no other recourse." The stadium lost the Landmark designation on February 17, 2006, primarily due to the extent of the renovations.[13]

The current design of the stadium, with the Greek style columns being the primary remnant of the older facility, has prompted some fans to refer to the stadium as the "Spaceship on Soldier Field".[15] This is because of how the new stadium bowl rises above and hangs over the columns, which was largely not the case in the older design. Also with the renovation, the front row 50-yard line seats are now only 55 feet away from the sidelines. This was the shortest distance of all NFL stadiums, until New Meadowlands Stadium opened in 2010, with a distance of 46 feet.

With the current stadium capacity of 61,500, Soldier Field is the smallest stadium in the NFL. See List of current National Football League stadiums.

The closest Chicago 'L' station to Soldier Field is the Roosevelt/Wabash station on the Orange, Green and Red lines. The Chicago Transit Authority also operates the #128 Soldier Field Express bus route to the stadium from Ogilvie Transportation Center and Union Station. There are also two Metra stations close by—the Museum Campus/11th Street station on the Metra Electric and South Shore lines, and 18th Street, which is only on the Metra Electric Line. Pace also provides access from the Northwest, West and Southwest suburbs to the stadium with four express routes from Schaumburg, Lombard, Bolingbrook, Burr Ridge, Palos Heights and Oak Lawn. 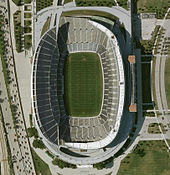 Aerial view of the stadium 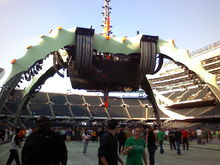 Configured for U2's 360° Tour, which opened in North America at Soldier Field in September 2009

Early to mid 1980s saw United States Hot Rod Association host Truck and Tractor Sled Pull Competitions and Monster Truck exhibitions at Soldier Field. The engines on some of the vehicles would echo through the skyscrapers in downtown Chicago as they made there pull. Damage to the stadium turf on a few of the event occasion's led USHRA to move events to the Rosemont Horizon Center(known today as Allstate Arena).

The Chicago Prep Bowl games are held here every year the day after Thanksgiving. The bowl game is older than the IHSA state championship tournament held since the 1960s.