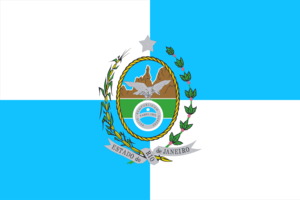 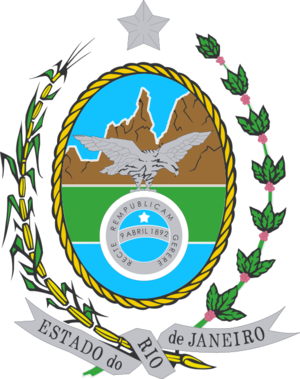 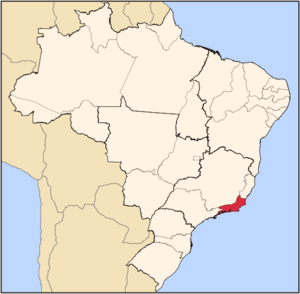 Its principal s are the Guandu River, the Piraí, the Paraíba do Sul, the Macaé and the Muriaé. Its climate is considered to be tropical.

Rio de Janeiro is made up of two distinct morphological areas: a , known as "baixada", and a , which are disposed in parallel fashion from the shoreline inland (towards Minas Gerais).

In the Brazilian flag, the state is represented by the Beta star in the Southern Cross (β = "Mimosa").

The state is part of the , and its topography comprises both s and plains, located between the and the Atlantic Ocean. Its coast is carved by the bays of Guanabara, Sepetiba, and Ilha Grande.

There are prominent s near the ocean, featuring also diverse environments, such as restinga vegetation, s, s and s.

Rio de Janeiro is the smallest state in the Southeast macroregion and one of the smallest in Brazil. It has, however, the third longest coastline in the country (second only to 's and 's), extending 635 kilometers.

In the 17th century, cattle and sugar cane stimulated the city's progress which was definitively assured when the port started to export the extracted gold of in 18 century. In 1763, Rio de Janeiro became the headquarters of the Colonial Brazil and the capital of the colony. With the change of the royal family for Brazil, in 1808, the region very was benefited with urban reforms to shelter the Portuguese. Inside of the promoted changes they are distinguished: the transference of agencies of public administration and justice, the creation of new churches, hospitals, foundation of the first bank of the country - the - and the Imprensa Régia, with the Gazette do Rio of Janeiro. In following years had also appeared the Jardim Botânico, Academia Real Militar.

Thus, a process of cultural introduction, influenced not only by the arrival of the Royal Family, but also by the presence of European artists who had been hired to register the society and Brazilian nature. In this same time, was born the Escola Real de Ciências, Artes e Ofícios (The Royal School of Sciences, Arts, and Works).

In 1834, the city of Rio de Janeiro was transformed into neutral city, remaining as capital of the country, while the captainships passed to being provinces, with its headquarters in , a neighbor city. In 1889, the city was changed into capital of the Republic, the neutral city in federal district and the province in State. With the change of the capital for Brasilia, in 1960, the city of Rio de Janeiro became the State of .

People of Portuguese ancestry predominate in most of the state. Other , such as Swiss and Germans settled mostly in the mountainous areas (, , etc) and in the capital. Italians and Spaniards are also present in the capital as well as in the surrounding cities. [ [http://www.multirio.rj.gov.br/historia/modulo02/colonia_suica.html A Colônia Suíça de Nova Friburgo ] ] [ [http://www.luteranos.com.br/202/160_anos/colonizacao.html A colonização alemã em Petrópolis ] ]

People of African descent are numerous mostly in the capital city. Those of mixed-race ancestry (s) are the majority of the population in some towns.

It is the great explosion of joy in Rio. A party uniting emotions, creativity, plasticity, colours, sounds and much . It is the greatest popular party in the world. A unique record of the rich cultural melting pot typical of .

In , New Year’s Eve celebration involves the whole city population. Local inhabitants and visitors join to celebrate taken by the same euphoria: to be in Rio. The party, one of the most famous in the , is held on the famous beach of , gathering thousands of people to enjoy musical performances and fireworks – increasingly exuberant year after .

Since August 2004, with the transfer of many flights from Santos-Dumont Airport, Rio de Janeiro International Airport has returned to being the main doorway to . According to data from the official Brazilian travel bureau, Embratur, nearly 40% of foreign tourists who visit Brazil choose Rio as their gateway, meaning Galeão Airport. Besides linking Rio to the rest of Brazil with domestic flights, Galeão has connections to more than 18 countries. It can handle up to 15 million users a year in two passenger terminals. Located only 20 kilometers from downtown Rio, the international airport is served by several quick access routes, such as the Linha Vermelha and Linha Amarela freeways and Avenida Brasil, thus conveniently serving residents of the city’s southern, northern and western zones. There are special shuttle buses linking Galeão to Santos-Dumont, and bus and taxi service to the rest of the city. The airport complex also has Brazil’s longest runway at 4.240 meters, and one of ’s largest and best equipped cargo logistics terminals.

More notable sports events in Rio include the and the World finals. was the place of into 1978-1990 and the event into 1996-1999. WCT/WQS championships were contested on the beaches from 1985-2001. The city has built a new near the Maracanã, to hold 45,000 people. It was named after Brazilian ex- president . Sports are a very popular pastime in Rio de Janeiro. The most popular is "futebol" (soccer). Rio de Janeiro is home to four traditional Brazilian football clubs:Botafogo, Flamengo, Fluminense and Vasco.

is one of the 18 remaining candidates to host games of the , for which is the only n bidder.

In the foreground of the state flag, an , symbol of Brazil's royal family, appears. In the background, the rock formation "Dedo de Deus" ("The Finger of God"), which is visible from the city of Rio de Janeiro in a clear day. The outer part of the coat of arms represents the state's agricultural richness, (left) and (right).