Darrell K Royal (born July 6, 1924) is a former American football player and coach. He served as the head coach at Mississippi State University (1954–1955), the University of Washington (1956), and the University of Texas at Austin (1957–1976), compiling a career college football record of 184–60–5. In his 20 seasons at Texas, Royal's teams won three national championships (1963, 1969, 1970), 11 Southwest Conference titles, and amassed a record of 167–45–5. He is the winningest coach in Texas Longhorns football history. Royal also coached the Edmonton Eskimos of the Canadian Football League for one season in 1953. He played football at the University of Oklahoma from 1946 to 1949. Royal was inducted into the College Football Hall of Fame as a coach in 1983. Darrell K Royal – Texas Memorial Stadium in Austin, Texas, where the Longhorns play their home games, was renamed in his honor in 1996.

"K" is Royal's given middle name, not an abbreviation. He received it in honor of his mother, Katy, who died when he was an infant. She died of cancer, but because of the stigma surrounding the disease at that time, Royal was led to believe until he was an adult that she had died giving birth to him.[1]

In 1942, during World War II, Royal finished Hollis High School, where he had played football. Royal joined the United States Army Air Corps, where he played football for the 3rd Air Force team during 1945 and was spotted and recruited by scouts for the University of Oklahoma Sooners football program.[2]. Royal played quarterback and defensive back at the University of Oklahoma under his mentor, coach Bud Wilkinson from 1946 to 1949. While attending Oklahoma, he joined the Delta Upsilon Fraternity.

Royal was most noted for his prowess as a defensive back, where his 18 career interceptions and his three interceptions in the 1947 game against Oklahoma A&M are still Sooner records.[3][4]

Royal's part-time contributions at quarterback had a similar impact, despite having to share time with Jack Mitchell and Claude Arnold at the position. He threw a 43-yard pass against the North Carolina in the 1949 Sugar Bowl. Royal holds the fourth-best winning percentage in school history (minimum 15 starts) with a 16–1 mark as a part-time quarterback starter. His 11–0 mark as a starter in 1949 ranks as one of the best seasons in school history.[3][4]

In 2000, Royal was inducted into the Oklahoma Sports Hall of Fame.

Royal served as an assistant coach at North Carolina State, Tulsa and Mississippi State. He coached the Edmonton Eskimos of the Canadian Football League, and in 1954, he returned to Mississippi State[5] for his first collegiate head coaching job. He spent the 1956 season as head coach at the University of Washington.

Royal took over as head coach at University of Texas in December 1956, and achieved success almost instantaneously. The team went from a 1–9 record, their worst record ever, in 1956 to a 6–4–1 mark and a berth in the Sugar Bowl in 1957. In Royal's 20 years as head coach, Texas never had a losing season. Royal posted a 167–47–5 career record at Texas. His overall coaching record was 184–60–5.

With Royal at the helm, Texas won three national championships (1963, 1969, and 1970), won or shared 11 Southwest Conference championships, and made 16 bowl appearances. 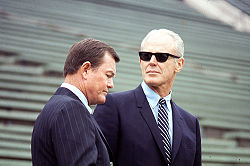 Royal's coaching tactics were the subject of criticism in Gary Shaw's exposé of college football recruiting and coaching practices, Meat on the Hoof, which was published in 1972, six years after Shaw left the Texas football program.[6]

Beginning in 1962, Royal also served as athletic director for the University of Texas. He retired from coaching in 1976, and remained director of athletics until 1980. He now serves as special assistant to the university president on athletic programs. In 1996, the University honored him by renaming Texas Memorial Stadium as Darrell K Royal – Texas Memorial Stadium. Royal was elected to the College Football Hall of Fame in 1983.