Charles Joseph "Charlie" Weis (born March 30, 1956) is an American football coach. He currently serves as offensive coordinator for the Florida Gators. For five years, from December 2004 through 2009, he was the head football coach at the University of Notre Dame. From 1997 to 1999, he was an NFL offensive coordinator for the New York Jets, as well as for the New England Patriots from 2000 to 2004 NFL season, and the Kansas City Chiefs for the 2010 season.

After graduating from Notre Dame in 1978, Weis began his coaching career at Boonton High School in New Jersey. He spent the next five seasons at Morristown High School in New Jersey as a football assistant.[1] In 1985, he was hired by head coach Joe Morrison at the University of South Carolina, where he served four seasons on the Gamecock staff before returning to New Jersey as the head coach at Franklin High School in 1989. That year, he directed Franklin Township to the New Jersey state championship while also assisting in the New York Giants' pro personnel department. Charlie Weis also never played a down of college or professional football.

Weis launched his professional coaching career in 1990 when he was named offensive assistant and assistant special teams coach under Giants head coach Bill Parcells. The Giants went on to win Super Bowl XXV at the end of that season, beating the Buffalo Bills by a score of 20–19. After Ray Handley took over as head coach in 1991, Weis stayed on as the running back coach for two seasons, then began a four-year stint with the New England Patriots. For the first two years, Weis served as the tight end coach (1993–94).

On November 30, 2004, after finishing its football season with a 6–5 record, Notre Dame released head coach Tyrone Willingham.[3] After first choice Urban Meyer accepted the head coaching position at the University of Florida,[4] the university ultimately hired Weis, who was named Notre Dame's 28th head football coach on December 12, 2004. Weis signed a six-year contract worth a reported US$2 million per year. He was the first Notre Dame graduate to hold the football head coaching position since Hugh Devore (a 1934 graduate) served as interim coach in 1945 and 1963, and the first alumnus to serve as the Irish football coach on a full-fledged basis since Joe Kuharich (a 1938 Notre Dame graduate), who coached at Notre Dame from 1959 through 1962.[5]

In his first season as head coach of the Fighting Irish, Weis was widely quoted as telling his team that they would have a "decided schematic advantage" against their opponents, apparently in the belief that his schemes and strategies developed in the NFL were superior to the schemes being run by other college coaches.[6] Indeed the team's play, particularly that of junior quarterback Brady Quinn and junior wide receiver Jeff Samardzija, improved greatly. Samardzija, previously a little-used wide receiver, became Quinn's favorite target and a frequent game-breaker, and set school records for most touchdown receptions in a season (15), most receiving yardage in a season (1,249), and most consecutive games with a touchdown reception (8),[7] after having no touchdown receptions in his previous two years at Notre Dame.[8] Notre Dame lost to Michigan State in a dramatic 3 overtime loss. Weis was quoted as saying that they would never lose to Michigan State on his watch. Weis was 2–3 against the Spartans over his career.

With a record of 9–2, his team finished the regular season ranked sixth in the Bowl Championship Series (BCS) standings, granting them a berth in the 2006 Fiesta Bowl in Tempe, Arizona, on January 2, 2006 which they lost to the Ohio State Buckeyes by a score of 34–20.[9] The Irish finished ninth in the final AP Poll and eleventh in the Coaches Poll.[10][11] His team's success on the field helped make Weis winner of the 2005 Eddie Robinson Coach of the Year Award, selected by the Football Writers Association of America.[12]

On October 29, 2005, barely halfway through the first year of a six-year contract, and with only a 5–2 record, Weis signed a contract extension with Notre Dame. The new 10-year deal, which began with the 2006 season, and which was to be worth a reported $30–40 million, would keep Weis at Notre Dame through 2015.[13]

During the 2006 season, Weis led the Fighting Irish to a 10–2 regular season record, and a second straight BCS berth, this time losing 41–14 in the Sugar Bowl to the LSU Tigers. This loss was the second straight bowl loss under Weis and the ninth straight bowl loss for the Irish.[14] The Irish finished No. 17 in the final AP poll, and No. 19 in the final Coaches' Poll.[15][16] While this season could be considered a disappointment based on Notre Dame's No. 2 pre-season ranking, Weis led the Irish to its second straight season of nine wins or more, something not achieved since the 1992 and 1993 seasons under Lou Holtz.[17] Also for the second straight year Weis put together a top 10 recruiting class,[18] including national player of the year Jimmy Clausen.[19]

In the 2007 season, Notre Dame went 3–9, with their only wins coming against UCLA, Duke and Stanford.[20][21] Their loss to Navy on November 3 snapped an NCAA-record 43-game winning streak over the Midshipmen, dating back to the Heisman Trophy-winning tenure of Roger Staubach at the Naval Academy.[22] The team ranked near the bottom of Division I FBS in both rushing yards per game and total yards per game.[23][24] Along with being third from last in scoring per game,[25] the team was shut out twice en route to its first nine-loss season ever.[26][27] Weis attributed the team's downfall to his own mistakes, including his failure to use full-speed practices and to develop his players properly, as well as to the graduation of star quarterback Brady Quinn.[28] Despite the poor season, which was Notre Dame's worst ever (by losses), Weis nonetheless managed to recruit one of the top recruiting classes in the country.[29]

In 2008, The Irish started 4–1, but completed the regular season with a 6–6 record, including a 24–23 loss to Syracuse, the first time that Notre Dame had fallen to an eight-loss team. The combined 15 losses from 2007–08 marks the most losses for any two-year span. Despite speculation the university might fire Weis, it was announced shortly after the conclusion of the regular season that he would remain head coach in 2009.[30] Weis's Notre Dame squad ended the season on a positive note, finally breaking the Irish's NCAA record nine-game bowl losing streak by beating Hawai'i 49–21.[31] In the process, Notre Dame scored its highest point total of the season, its highest point total ever in a bowl game, and broke 8 other bowl records.[31] The bowl win also helped Notre Dame to a 7–6 final record, its 102nd winning season in 120 years of football and Weis' third in four years.[31] Notre Dame ended the year with a top 15 recruiting class, including signing the top defensive player in the nation.

The Fighting Irish finished the 2009 regular season with a 6–6 record. A poor record for the season in addition to high preseason expectations for the team, including a preseason top 25 ranking, caused widespread speculation that Notre Dame would fire Weis.[32] Weis was fired on November 30, 2009.[33] He was succeeded by Brian Kelly.

Weis was named offensive coordinator of the Kansas City Chiefs for 2010. In Weis's first year, the Chiefs improved from a record of 4–12 to 10–6 and returned to the playoffs after winning the AFC Western Division. With Weis as offensive coordinator, the Chiefs had the NFL's best rushing attack, averaging an impressive 165 yards per game on the ground. Offensively the Chiefs ranked 9th in total offense, 11th in points per game, 1st in rushing, and 28th in passing. The Chiefs also sent three players on offense (WR Dwayne Bowe, RB Jamaal Charles and OG Brian Waters) to the Pro Bowl. Bowe and Charles will make their first ever trip to the Pro Bowl. Weis has also been credited with the improvement of QB Matt Cassel who had a career year throwing for 27 touchdowns and only 5 interceptions in 14 games. 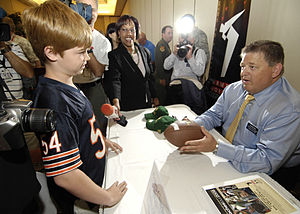 Charlie Weis signs a football for a young fan at Scott Air Force Base in Illinois.

Weis and his wife, Maura, have two children, Charles Joseph and Hannah Margaret. In 2003, Weis and his wife established the Hannah & Friends Foundation, dedicated to children affected by developmental disorders and named after his daughter, who is autistic. In the spring of 2004, the inaugural Hannah & Friends Celebrity Golf Classic was held to benefit the foundation.

Weis told YES Network commentators at the New York Yankees and Detroit Tigers MLB game on Friday, July 17, 2009, that his favorite baseball team is the Yankees. He was there to celebrate the announcement of the Notre Dame and Army football game to be played at the new Yankee Stadium in November 2010.[36]

Weis was born in Trenton, New Jersey, and graduated from Middlesex High School in Middlesex, NJ. He has one older sister and three younger brothers, one of whom attended West Point.

In 2002, Weis underwent gastric bypass surgery, after which he lost 90 lb (41 kg; 6.4 st) from his top weight of 350 lb (160 kg; 25 st). [37][38] When asked why he underwent surgery, Weis stated he was afraid he would "drop dead" from obesity.[39] Because of complications from the surgery, Weis spent two weeks in a coma and nearly died. Weis was so close to death that he reportedly received the Catholic last rites.[40] Weis later sued the doctors who performed the surgery for malpractice and lost. A major reason cited for the jury's decision is that Weis ignored doctors' advice and pushed to have the operation done quickly, rather than going through a recommended six-week preoperative program.[41]

Playing against Michigan on September 13, 2008, one of Notre Dame's players, John Ryan, ran into Charlie Weis by accident. Weis tore his anterior cruciate ligament and medial collateral ligament in the process and had to undergo surgery.[42]