Paul William "Bear" Bryant (September 11, 1913 – January 26, 1983) was an American college football coach. He was best known as the longtime head coach of the University of Alabama football team. During his 25-year tenure as Alabama's head coach, he amassed six national championships and thirteen conference championships. Upon his retirement in 1982, he held the record for most wins as head coach in collegiate football history, however, this record now belongs to Bryant's friend and rival, Joe Paterno. At the University of Alabama, the Paul W. Bryant Museum, Paul W. Bryant Hall, Paul W. Bryant Drive and Bryant–Denny Stadium are all named in his honor. He was also known for his trademark black and white houndstooth or gingham hat, deep voice, casually leaning up against the goal post during pre-game warmups, and frequently holding his rolled-up game plan while on the sidelines.

Paul Bryant was the 11th of 12 children who were born to William Monroe and Ida Kilgore Bryant in Fordyce, Arkansas.[1] His nickname stemmed from his having agreed to wrestle a captive bear during a theater promotion when he was 13 years old.[2]

He attended Fordyce High School, where 6 ft 1 in (1.85 m) tall Bryant, who as an adult would eventually stand 6 ft 3 in (1.91 m), began playing on the school's football team as an eighth grader. During his senior season, the team, with Bryant playing offensive line and defensive end, won the 1930 Arkansas state football championship.

Bryant accepted a scholarship to play for the University of Alabama in 1931. Since he elected to leave high school before completing his diploma, Bryant had to enroll in a Tuscaloosa high school to finish his education during the fall semester while he practiced with the college team. Bryant played end for the Crimson Tide and was a participant on the school's 1934 National Championship team. Bryant was the self-described "other end" during his playing years with the team, playing opposite the big star, Don Hutson, who later became an NFL Hall-of-Famer. Bryant himself was second team All-SEC in 1934, and was third team all conference in both 1933 and 1935. Bryant played with a partially-broken leg in a 1935 game against Tennessee.[2] Bryant pledged the Sigma Nu social fraternity, and as a senior, he married Mary Harmon.[2]

Bryant was selected in the fourth round by the Brooklyn Dodgers in the 1936 NFL Draft, but never played professionally.

After graduating in 1936, Bryant took a coaching job at Union University in Jackson, Tennessee, but he left that position when offered an assistant coaching position under Frank Thomas at the University of Alabama. Over the next four years, the team compiled a 29–5–3 record. In 1940, he left Alabama to become an assistant at Vanderbilt University under Henry Russell Sanders. After the 1941 season, Bryant was offered the head coaching job at the University of Arkansas. However, following the bombing of Pearl Harbor, Bryant joined the United States Navy. He served off North Africa, seeing no combat action. However, his ship, the civilian merchantman SS Uruguay was rammed by another ship and ordered to be abandoned. Bryant disobeyed the order, saving the lives of his men. Two hundred others died.[3] He was later granted an honorable discharge to train recruits and coach the North Carolina Navy Pre-Flight football team. One of the players he coached for the Navy was the future Pro Football Hall of Fame quarterback Otto Graham. While in the Navy, Bryant attained the rank of Lieutenant Commander.[4] 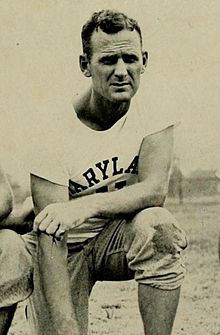 Bryant as Maryland head coach in 1945

In 1945, 32-year old Bryant met Washington Redskins owner George Marshall at a cocktail party hosted by the Chicago Tribune, and said he had turned down offers for assistant coaching positions at Alabama and Georgia Tech. Bryant told Marshall that he was intent on becoming a head coach. Marshall put him in contact with Harry Clifton "Curley" Byrd, the president and former football coach of the University of Maryland.[5]

After meeting with Byrd the next day, Bryant received the job as head coach of the Maryland Terrapins. In his only season at Maryland, Bryant led the team to a 6–2–1 record. However, Bryant and Byrd came into conflict. In the most prominent incident, while Bryant was on vacation, Byrd reinstated a player who had been suspended by Bryant for a violation of team rules. After the 1945 season, Bryant left Maryland to take over as head coach at the University of Kentucky.[6]

Bryant coached at the University of Kentucky for eight seasons. Under Bryant, Kentucky made its first bowl appearance (1947) and won its first Southeastern Conference title (1950). The 1950 Kentucky team concluded its season with a victory over Bud Wilkinson's #1 ranked Oklahoma Sooners in the Sugar Bowl. The living players from the 1950 team were honored during halftime of a game during the 2005 season. Bryant also led Kentucky to appearances in the Great Lakes Bowl, Orange Bowl, and Cotton Bowl Classic. Kentucky's final AP poll rankings under Bryant included #11 in 1949, #7 in 1950, #15 in 1951, #20 in 1952 and #16 in 1953. The 1950 season was Kentucky's highest rank until it finished #6 in the final 1977 AP poll. His 1950 University of Kentucky team has actually been retroactively named co national champions by the NCAA for their defeat of then #1 ranked Oklahoma.

In 1954, Bryant accepted the head coaching job at Texas A&M University. He also served as athletic director while at A&M.[2]

The Aggies suffered through a grueling 1-9 initial season which began with the infamous training camp in Junction, Texas. The “survivors” were given the name “Junction Boys.” Two years later, Bryant led the team to the Southwest Conference championship with a 34–21 victory over the University of Texas at Austin. The following year, 1957, Bryant's star back John David Crow won the Heisman Trophy (the only Bryant player to ever earn that award), and the Aggies were in title contention until they lost to the #20 Rice Owls in Houston, amid rumors that Alabama would be going after Bryant.

Again, as at Kentucky, Bryant attempted to integrate the Texas A&M squad. "We'll be the last football team in the Southwest Conference to integrate," he was told by a Texas A&M official. "Well," Bryant replied, "then that's where we're going to finish in football."[7]

At the close of the 1957 season, having compiled an overall 25–14–2 record at Texas A&M, Bryant returned to Tuscaloosa to take the head coaching position, succeeding J.B. "Ears" Whitworth, as well as the athletic director job at Alabama.[2] 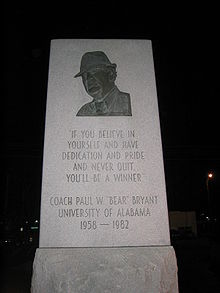 Memorial of Bryant outside of Legion Field

Bryant took over the Alabama football team in 1958. When asked why he came to Alabama, he replied "Momma called. And when Momma calls, you just have to come runnin'." After winning a combined four games in the three years prior to Bryant's arrival, the Tide went 5–4–1 in Bryant's first season.[8] The next year, in 1959, Alabama beat Auburn and appeared in a bowl game, the first time either had happened in the last six years. In 1961, under his leadership, with quarterback Pat Trammell and football greats Lee Roy Jordan and Billy Neighbors, Alabama went 11–0 and defeated Arkansas in the Sugar Bowl to claim the national championship.

The next three years (1962–64) featured Joe Namath at quarterback and were among Bryant's finest. The 1962 season ended with a victory in the Orange Bowl over Bud Wilkinson's University of Oklahoma Sooners. The following year ended with a victory in the 1963 Sugar Bowl. In 1964, the Tide won another national championship, but lost to the University of Texas in the Orange Bowl, in the first nationally televised college game in color. The Crimson Tide would repeat as champions in 1965 after defeating Nebraska in the Orange Bowl. Coming off back-to-back national championship seasons, Bryant's Alabama team went undefeated in 1966, and defeated a strong Nebraska team 34–7 in the Sugar Bowl. However, Alabama finished third in the nation behind co-national champions Michigan State and Notre Dame, who had previously played to a 10–10 tie in a late regular season game.

The 1967 team was billed as another national championship contender with star quarterback Kenny Stabler returning, but the team stumbled out of the gate and tied Florida State 37–37 at Legion Field. The season never took off from there, with the Bryant-led Alabama team finishing 8–2–1, losing in the Cotton Bowl Classic to Texas A&M, coached by former Bryant player and assistant coach Gene Stallings. In 1968, Bryant again could not match his previous successes, as the team went 8–3, losing to the University of Missouri 35–10 in the Gator Bowl. The 1969 and 1970 teams finished 6–5 and 6–5–1 respectively.

After these disappointing efforts, many began to wonder if the 57-year old Bryant was washed up. He himself began feeling the same way and considered either retiring from coaching or leaving college football for the NFL.

For years, Bryant was accused of racism for refusing to recruit black players, but he merely said that the prevailing social climate did not let him do this. He finally was able to convince the administration to allow him to do so after scheduling the Tide's 1970 season opener against a strong University of Southern California team led by African American fullback Sam Cunningham. Cunningham rushed for 150 yards and three touchdowns in a 42–21 victory against the overmatched Tide. After that season, Bryant was able to recruit Wilbur Jackson as Alabama's first African American scholarship player, and junior-college transfer John Mitchell became the first black man to play for Alabama. By 1973, one-third of the team's starters were African American.

In 1971, Bryant began engineering a comeback to prove that he still had it. This included abandoning Alabama's old power offense for the newly-fashionable wishbone formation. The change helped make the remainder of the decade a successful one for the Crimson Tide. That season, Alabama went undefeated and earned a #2 ranking, but lost to #1 Nebraska, 38–6 in the Orange Bowl. The team would go on to split national championships in 1973 (Notre Dame defeated Alabama in the 1973 Sugar Bowl, which led the UPI to stop giving national championships until after all the games for the season had been played - including bowl games) and 1978 (despite losing a regular season matchup against co-national champion USC) and win it outright in 1979.

After the 1982 season, Bryant, who had turned 69 that September, decided to retire, stating "This is my school, my alma mater. I love it and I love my players. But in my opinion, they deserved better coaching than they have been getting from me this year." His last regular season game was a 23–22 loss to Auburn and his last postseason game was a 21–15 victory in the Liberty Bowl in Memphis, Tennessee over the University of Illinois. After the game, Bryant was asked what he planned to do now that he was retired. He replied "Probably croak in a week." His reply proved ominous.

Four weeks after making that comment, and just one day after passing a routine medical checkup, on January 25, 1983, Bryant checked into Druid City Hospital in Tuscaloosa after experiencing chest pain. A day later, when being prepared for an electrocardiogram, he died after suffering a massive heart attack. First news of Bryant's death came from Bert Bank (WTBC Radio Tuscaloosa) and on the NBC Radio Network (anchored by Stan Martyn and reported by Stewart Stogel).[9] On his hand at the time of his death was the only piece of jewelry he ever wore, a gold ring inscribed "The Junction Boys".[10] He is interred at Birmingham's Elmwood Cemetery. A month after his death, Bryant was posthumously awarded the Presidential Medal of Freedom, the nation's highest civilian award, by President Ronald Reagan. A moment of silence was held prior to Super Bowl XVII, played four days after Bryant's passing.

In 1962, after Bryant denounced The Saturday Evening Post for printing an article that charged him with encouraging his players to "engage in brutality" in a 1961 game against the Georgia Tech Yellow Jackets, the magazine claimed that Bryant and Georgia Bulldogs coach Wally Butts had conspired to fix their 1962 game together in Alabama's favor. Butts, also on Bryant's behalf, sued Curtis Publishing Co. for defamation. The case went to the Supreme Court. As a result of Curtis Publishing Co. v. Butts 388 U.S. 130 (1967),[11] Curtis was ordered to pay $3,060,000 in damages to the plaintiff.