1892 Cornell varsity football team: Warner is the 4th from the left in the middle row.

Warner was born in Springville, New York. He attended and played football for Cornell University. As captain of the Cornell football team, Warner obtained the nickname "Pop" because he was older than most of his teammates. After graduating from Cornell, he had a brief legal career in New York. In 1902, Warner played pro football for the Syracuse Athletic Club during the first World Series of Football, held at Madison Square Garden. It was during this event, that Warner played in the very first professional indoor football game as his Syracuse squad upset the heavily favored "New York" team. During the Series, Warner was cut badly on the side of his head. While he laughed it off at the time, he was replaced for the rest of the Series, by Blondy Wallace.[1]

Warner was hired by the University of Georgia as its new head football coach in 1895 at a salary of $34 per week.[2] For the 1895-1896 academic year, Georgia's entire student body consisted of 126 students.[3] This was Georgia's first year in the Southern Intercollegiate Athletic Association, a conference that it founded along with Alabama, Auburn, Georgia Tech, North Carolina and Vanderbilt. Warner's first Georgia team had three wins against four losses.

The following year, Georgia rehired Warner and the team had an undefeated season. While at Georgia, Warner also served as a co-coach at Iowa State.[4] He coached teams from two schools simultaneously on three occasions: Iowa State and Georgia during the 1895 and 1896 seasons, Iowa State and Cornell in 1897 and 1898, and Iowa State and Carlisle in 1899.[5] Warner's Iowa State record was 18–8, bringing Warner's total lifetime record to 337–114–32.[n 1]

After his stint in Georgia, Warner returned to Cornell to coach football for two seasons. He then coached at the Carlisle Indian Industrial School in Pennsylvania from 1899–1903, returned to Cornell for three seasons, and returned again to Carlisle in 1907. During his second tenure at Carlisle, Warner coached one of the most famous American athletes, Jim Thorpe.

The next team Warner coached was at Stanford University from 1924 to 1932, where his teams played in three Rose Bowl games, including the classic 1925 Rose Bowl game against Knute Rockne and the Four Horsemen of Notre Dame. Warner added a fourth national championship in 1926.[6]

Warner's final head coaching job was at Temple University where he coached for five years until retiring in 1938. Following his retirement, he served as advisory football coach for the Spartans of San Jose State College.

Warner died of throat cancer in Palo Alto, California at the age of 83. 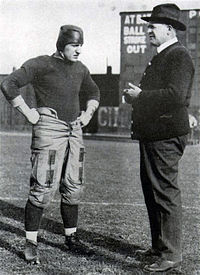 "Pop" (right) with three-time All-American and University of Pittsburgh team captain Bob Peck during the 1916 season. That year, Pitt would outscore its opponents 255–25 along the way to an 8–0 record and a consensus national championship.