Infobox_University
name = The University of Tulsa 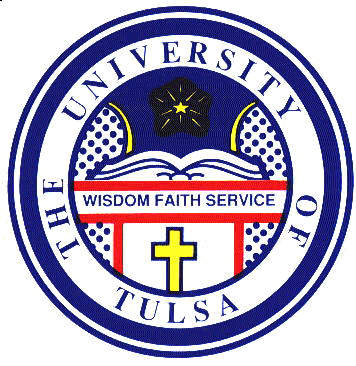 The University of Tulsa is a awarding bachelors, masters, and doctoral degrees located in . It is currently ranked 83rd among granting universities in the nation by "" and is listed as one of the "Best 366 Colleges" by the "". The university is historically affiliated with the .

The University of Tulsa was founded in , as the Presbyterian School for Indian Girls in 1882 under the leadership of , but was re-chartered as the Henry Kendall College in 1894 under the auspices of the Presbyterian Women's Board of Home Missions. In 1907 the college moved to its current site in . A university was formed in 1920 when the college merged with the proposed to become the University of Tulsa.

The University of Tulsa is noted for having one of the world's premier programs in , and has distinguished programs in English, , , Clinical and I/O Psychology, and several disciplines. The university also maintains a school of law [http://www.law.utulsa.edu/] , which is one of the few to specialize in Native American legal issues. The University of Tulsa College of Law Review [http://www.utulsa.edu/law/tlr/] ranks in the top 15% of most cited legal periodicals as ranked by . [http://law.wlu.edu/library/mostcited/index.asp]

In 2008 Tulsa was ranked ninth in "Quality of Life" by the "'s" "The Best 366 Colleges" guide. The University of Tulsa also placed sixth among all colleges for "Happiest Students," was ranked eleventh in the "Lots of Class/Race Interaction" category, and in "Town-Gown Relations" Tulsa was ranked fifth in the country. In the 2006 edition, the university was described as follows: “The University of Tulsa is one of the sleeper gems of the , a private school large enough to house numerous top-flight programs but small enough to facilitate one-on-one instruction provided in a homey atmosphere.”

TU is one of 150 colleges to be included in the inaugural edition of “Colleges of Distinction” and is also included in "The Unofficial Biased Guide to the 331 Most Interesting Colleges, 2005 edition." "" magazine named TU one of the top 50 schools in the country for women in its October 2004 edition. U.S. News and World Report also ranks TU as a top 100 national university (83rd as of 2008), the only Oklahoma university to make the list.

The campus of the University of Tulsa centers on a wide, grassy, quad-like space known as "The U." The predominant architectural style is English Gothic. Most of the buildings are constructed from tan and rose-colored Crab Orchard from interspersed with stone quarried in . Other materials include Bedford from and quarried in .

Completed in 2006, Bayless Plaza houses the Kendall Bell, hanging in the cupola of the former Kendall Hall. The plaza lies directly south of Tyrrell Hall, long time home of the School of Music, and serves as the apex of Tucker Drive, the University's main entrance.

TU football played in Skelly Stadium until 2007 when the venue was renamed Skelly Field at H. A. Chapman Stadium, following renovations. The Case Athletic Complex in the north end of the field provides office facilities for the football staff, a new locker room and trainer facility, a letterman's lounge and box seating on the top level, and meeting rooms, a computer lab, and study spaces for student-athletes. Renovations are nearly completed and will provide renovated seating throughout the stadium, new turf, an updated score board and Jumbotron, and an expanded press box. The changes will also include the addition of an extensive plaza area (Thomas Plaza) on the west side of the stadium to accommodate restrooms, food and drink stands, and souvenir shops.

At the top of The U sits one of the campus' most notable landmarks, the McFarlin Library, which is named after Robert and Ida McFarlin, the library's primary benefactors. The McFarlin's had only one stipulation with their gift, the view of Downtown Tulsa from McFarlin can never be blocked. Ground breaking ceremonies took place on and the edifice was dedicated on . The library continued to grow over the years, adding two five-story additions by 1979. Currently, the library houses over three million items and is noted for its collections of twentieth-century British, Irish, and , including the world's second largest collection of materials by . It also houses the papers of winner . The library also contains a vast collection of books on Native American history.Fact|date=May 2008 Renovations began in the spring of 2007 on a 12,000-square-foot addition that will consolidate the library's computing and technology resources into one location. The library's reading rooms will also be restored to provide quiet areas for student and faculty study. Construction is scheduled to be completed in 2009.

Named for its principal donors, Mr. and Mrs. Robert C. Sharp, Sharp Chapel was completed on . It replaced the university's original chapel that was located in Kendall Hall before its destruction and replacement by the current Kendall Hall theater building. Sharp Chapel houses the Offices of University Chaplain and serves the religious needs of multiple denominations present on campus as well as hosting many awards ceremonies and weddings.

Additions to Sharp Chapel were completed in the spring of 2004, including the Westminster Room, an atrium, kitchen, and a second floor including administrative offices and a conference room.

The University of Tulsa is home to more than 200 student organizations, registered with and partially funded by the Student Association.

The Student Association is the University of Tulsa student government body. It is organized into three branches: the Executive Branch, which includes Cabinet and is in charge of organizing large campus wide events and activities; the Judicial Branch; and the Legislative Branch, or Student Senate, which coordinates funding, oversees student organizations, and addresses general issues impacting student life on campus. Its budget is provided partially by the university and partially by a fee paid by students each semester.

Traditionally, the Student Association coordinates Homecoming activities, including cross campus competitions and the homecoming game tailgate. Another traditional event is Springfest, a week long series of events including food, various on campus activities, and a concert bringing in such names as Cake, Guster, and Ben Folds. Activities organized by Student Association are free to all TU students.

There are 5 IFC fraternities and 6 NPC sororities on campus. The living quarters in the back of the sorority houses are university owned residence halls, but, traditionally, only current members of the sororities live there.

There are also a number of historically black sororities and fraternities on campus that fall under the National Pan-Hellenic Council. Currently, there are five active organizations:

Other fraternities on campus that do not fall under the National Pan-Hellenic Council include:

* Reynolds Rowdies: Re-established for the 2006 basketball season, the Reynolds Rowdies are the official student fans of the Golden Hurricane basketball teams. The university provides interested students with free blue and yellow tie-dyed t-shirts, food and other prizes for attending games. The orginal Rowdies were current members of the football team showing their support for the men's basketball team.

* Kendall Bell: The Kendall Bell, now housed in Bayless Plaza, is traditionally rung by graduating seniors upon completion of their last final exam at the university.

* Alma Mater: 'Hail to Tulsa' is sung by alumni and current students prior to major sporting events and at the end of all commencement ceremonies. Alumni and students remain standing as a sign of respect.

Tulsa's sports teams participate in the NCAA's -A . The university's mascot is the Golden Hurricane. marching band plays at all home football and basketball games as well as traveling to championships in support of the Golden Hurricane. Tulsa has won six national championships (three NCAA), four in women's golf and two in men's basketball. The University of Tulsa currently fields a varsity team in eight men's sports and ten women's sports. [cite web | title=TU Athletics Points of Pride | url=http://tulsahurricane.cstv.com/athletic-dept/tuls-points-of-pride.html | publisher=CSTV Networks, Inc | accessdate=2008-01-10 ] Tulsa's current is .

Athletic facilities are distributed throughout a number of buildings on campus. Mabee Gym houses an extensive indoor rowing facility, an indoor golf practice facility, and volleyball practice gyms. Renovations in Spring 2008 incorporated FieldTurf into an indoor practice field for the soccer, softball, and football programs. The tennis teams are housed in the Michael D. Case Tennis Center, which includes a number of indoor and outdoor courts. The Hurricane Soccer & Track Stadium is home to the track and field and soccer programs.

The university's motto used to read, in full, "Faith, Wisdom, Service: For Christ, For State."

In 2003 Tulsa joined the efforts of on the , an online archive of early twentieth-century periodicals. Tulsa has contributed various modernist texts from McFarlin Library’s Special Collections to the project's website.

Dr. Sean Latham, editor of the "James Joyce Quarterly", brought the 2003 to the University of Tulsa.

TU also hosts several meetings of the , including the SIG.

Tulsa is one of the first universities in the United States to have a mosque located on campus.