The Missouri Tigers athletics programs include the extramural and intramural sports teams of the University of Missouri, located in Columbia, Missouri, United States. The name comes from a band of armed guards called the Missouri Tigers who, in 1864, protected Columbia from Confederate guerrillas during the Civil War.[1]

The University of Missouri (often referred to as Mizzou or MU) is the flagship institution of the University of Missouri System.[2] The women's teams are sometimes called the Lady Tigers, but often both the men's and women's teams are simply called the Tigers. Mizzou is a member of the Big 12 Conference until July 1, 2012, when they become a member of the Southeastern Conference, and is the only NCAA Football Bowl Subdivision program in Missouri.

The Missouri Tigers are represented in the following NCAA Division I varsity sports: 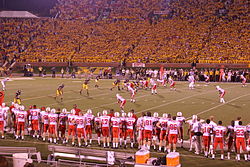 Chase Daniel takes a snap in the first quarter of the 2007 Mizzou vs. Nebraska football game.

The university's first football team was formed in 1890 by the sophomore class of the "Academic School" (now the College of Arts and Science). They challenged a team of Engineering students in April of that year upon encouragement of Dr. A. L. McRea, a university professor. Interest in the sport quickly grew among the students, professors, and administrators, and a Foot Ball Association was formed at a meeting on October 10, 1890. The first intercollegiate game for the university took place on Thanksgiving Day, 1890, when Missouri played Washington University before a crowd of 3,000 in St. Louis, Missouri. The Washington University team, which had already been playing for several years, easily defeated the University of Missouri team by a score of 28–0. Missouri has compiled a 10–14 record in bowl games, and has finished in the final Associated Press poll Top Ten six times since the poll began in 1936.

The men's basketball program has produced several NBA players, including Anthony Peeler, Doug Smith, Jon Sundvold, Steve Stipanovich, Kareem Rush, Keyon Dooling, Linas Kleiza, Thomas Gardner, and DeMarre Carroll. The Tigers were regularly a national power under Norm Stewart, whose tenure spanned four decades but which failed to include a Final Four appearance despite numerous conference championships. The team advanced to the Elite Eight under Quin Snyder in 2002 as a 12th seed (setting a record for the lowest-seeded team ever to do so), but inconsistent performance and various improprieties in his leadership of the program caused him to be fired in the midst of an abysmal 2006 season. He was replaced with then-UAB head coach Mike Anderson. In 2009 the team lost in the Elite Eight to the University of Connecticut Huskies. Playing Anderson's high-energy style, Missouri's games became known widely as "the fastest 40 minutes in basketball." Then, after a first round exit from the NCAA tournament in 2011, Anderson took the head coaching position with the University of Arkansas. Although the method upon which Anderson left Mizzou was highly criticized, he is credited with bringing the program back to national prominence. The head coaching vacancy was filled in early April 2011 with Frank Haith, the former University of Miami (Florida) head coach.

The current head coach of the women's basketball program is Robin Pingeton, formerly of Illinois State. She was hired in April 2010 to replace Cindy Stein, who resigned under pressure from boosters and media after the 2009–10 season. 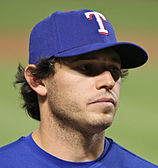 The first Missouri Tigers baseball team was in 1868. The first recorded season was in 1891, when the Tigers went 2–2.The Tigers won the National Championship in 1954. The presence of former Missouri Tiger baseball players in professional baseball continues to grow each year.

In 2007, two players signed contracts, bringing the number of former MU players signing pro contracts to 142. Current MU head coach Tim Jamieson has seen 40 players in his 13-year tenure sign pro contracts. Notable Tiger baseball alumni include Tim Laudner, who played for the 1987 World Champion Minnesota Twins, and Phil Bradley, who played for several teams in 1980s and early `90s. In 2006, pitcher Max Scherzer became the highest draft pick in Mizzou history when the Arizona Diamondbacks selected him in the first round with the 11th overall pick. Two years later, pitcher Aaron Crow broke that record by being picked 9th overall by the Washington Nationals. Current Major Leaguer Ian Kinsler is a former Tiger who also played for Coach Jamieson.

The Tigers' biggest rival is the Kansas Jayhawks, with whom they compete in the annual Border War. This is one of the most intense rivalries in college sports, as it goes back to a time of actual armed conflict between pro- and anti-slavery residents in Missouri and the Kansas Territory known as Bleeding Kansas.[3]

The Missouri–Kansas football series is the second-oldest and second-most-played rivalry in college football history. (See: The Rivalry (Lehigh–Lafayette) The teams first matched up in football on October 31, 1891. Missouri claims to lead the all-time series, 56–54–9, since it counts the forfeit of Kansas' 1960 victory as a win. (Kansas still claims the game as a Jayhawk win, leaving the series tied at 55–55–9.)[4][5] Missouri claims the 1911 football game in Columbia, Missouri as the world's first Homecoming.[6] An important meeting between the Tigers and the Jayhawks occurred on November 24, 2007 when the two teams played for the Big 12 North Championship and a shot at playing for the Big 12 Championship and a possible National Championship. The Tigers defeated the Jayhawks 36 to 28. This is regarded as the biggest victory in Missouri's history, which also occurred in the best season in Missouri's history.[7] The Tigers best season ever later resulted in a trip to the Cotton Bowl Classic, where they defeated Arkansas 38–7.

In basketball, the Tigers trail the series 94–171.

The Missouri-Nebraska football series was another historic rivalry alongside the MU–KU series, although it now ends with Nebraska's departure for the Big Ten Conference. The Missouri–Nebraska series was the second oldest rivalry in the Big 12, dating back to 1892. The two teams met 104 times, with Nebraska leading the series 65–36–3. The large lead was the result of a 24-year Nebraska winning streak from 1979 to 2002. The teams split the eight games played from 2003 to 2010. The rivalry saw renewed interest following the infamous Flea Kicker game of 1997. The two teams played for the Victory Bell trophy, which was first awarded in 1927.

There is also a relatively new basketball rivalry with the Illinois Fighting Illini of the Big Ten Conference referred to as the Braggin' Rights Game. The Braggin' Rights game debuted in 1980 and has been played every year since 1983. Missouri trails the series with a 10–20 record. The start of football season also often matches the two schools in the Arch Rivalry Game. Mizzou leads the football series with an all-time record of 14–7 since 1896.

The Tiger-Sooner Peace Pipe is a Rivalry trophy presented to the winner of the Missouri vs. Oklahoma game.

The trophy is a ceremony of smoking the old pipe. The trophy was inaugurated in 1929 by Chester M. Brewer, Mizzou's director of athletics, and by members of Mystical Seven, a University of Missouri honorary group ... The peace pipe was donated by a Mr. R. L. Hill, an "M" man and former president of the Missouri student body ... Ceremony takes place during halves, with Mystical Seven representing Missouri, and a similar organization representing Oklahoma ... Missouri won the first game, 13–0.

Since the inception of the Big 12 and its divisional play structure, the Tigers and the Sooners only face off two out every four years. Therefore, only SCHEDULED games between the two teams count for the exchange of the Peace Pipe. The most recent Big 12 Championship games featuring Mizzou and Oklahoma would not have triggered a transfer of the Peace Pipe (if Missouri had won on either occasion.)

Oklahoma leads the all-time series with a record of 65–23–5.

Oklahoma leads the series since the trophy tradition started with a record of 56–14–4.

The Telephone Trophy started during a 1959 Game featuring Iowa State and Missouri When the field phones were tested prior to the game, it was found that both teams could hear each other. The problem was solved by game time, but not without considerable worry on the part of the coaches. The Northwestern Bell Telephone Co. of Ames had a trophy made and presented it to Iowa State to be awarded each year to the team winning the game. An odd sidelight to the whole affair was that the same thing happened to Missouri later in the year in a game played at Columbia. Missouri won the first game, 14–0.

Missouri leads the series since the trophy tradition started with a record of 30–18–3.

The University of Missouri claims to be the originator of the tradition of homecoming.[6] Before games against the University of Kansas were played in Kansas City. However, a change in conference regulations required intercollegiate football games to be played on campus starting in Fearing that game attendance would be low, the new Missouri coach, C. L. Brewer, appealed with great success for the "Old Grads" to "Come Back Home" to boost attendance and help dedicate MU's new football field. The fans responded, swelling the crowd at Rollins Field in Columbia to more than ten thousand. MU, The NCAA, Trivial Pursuit, and Jeopardy! all verify that this game in 1911 was the first homecoming game.

Since 1971, there has been no doubt about the destination of the goal posts anytime they have been torn down following a home football game. 1971 marked the first year in which the goal posts ended up at Harpo's Bar and Grill at 29 S. Tenth Street in Columbia. Although no concrete reasoning is known behind the tradition, it is suggested that Harpo's became the destination because of its popularity among alumni returning to Columbia on game days and because the restaurant is one of the few places that had remained under consistent ownership without any name changes, so alumni and students all easily identify with the establishment.[11] Following the 2005 season, removable goal posts were installed, which are lowered at the close of each home game.

In 2010 the goal post tradition was revived following the victory against BCS #1 ranked Oklahoma. Thousands of fans began to swarm the field before the final play had even ended. Although there were event staff and highway patrol encircling the field, security was unable to prevent fans from storming the field and removing the north end zone goal post from the stadium.[12]

The Alma Mater for the University of Missouri is Old Missouri. It was written in 1895 and is sung to the tune of Annie Lisle and has two verses. Before and after athletic events, sometimes only the first verse is used. The first and second and second verses are more commonly sung at student orientation and at commencement/graduation ceremonies. Both verses are followed by the chorus.

Chorus Proud art thou in classic beauty
Of thy noble past
With thy watch words honour, duty,
Thy high fame shall last!

Second verse Every student, man and maiden
Swells the glad refrain.
'Till the breezes, music laden
Waft it back again.

Chorus Proud art thou in classic beauty
Of thy noble past
With thy watch words honour, duty,
Thy high fame shall last!

As one would expect from a university whose journalism school is often ranked among the top journalism schools in the world,[citation needed] the Tigers have an excellent presence on the radio and television. The Tiger Radio Network is anchored by KMBZ in Kansas City, KTGR AM/KCMQ FM in Columbia and Jefferson City, and KMOX in St Louis. Mike Kelly is the commentator for both sports, with John Kadlec and Chris Gervino serving as analysts for football and Gary Link filling in for basketball. In addition, the school owns and operates its own NBC affiliate, KOMU-TV, in Columbia. The station is run by MU faculty members and is staffed by professionals and students. It's the only college-owned and operated network affiliate in the country.

For indoor sports, Mizzou operates the Missouri Sports Network, a syndication package that airs on FSN Midwest and/or Metro Sports. It mainly broadcasts volleyball and basketball. Dan McLaughlin handles play-by-play for all sports, and is joined by a rotating group of color commentators, most notably Tigers coaching legend Norm Stewart for men's basketball games.