No. 35 Squadron was a Royal Australian Air Force (RAAF) transport unit. First formed in 1942, No. 35 Squadron saw action in World War II and the Vietnam War.

No. 35 Squadron was formed at RAAF Base Pearce on 11 March 1942. Initially flying only within Western Australia, its operations were extended to cover all of Australia and New Guinea from August 1943. During the later years of the war the Squadron provided air transport to the Australian military throughout the South West Pacific area. Following the Japanese surrender in August 1945, No. 35 Squadron flew Australian soldiers and ex-prisoners of war home. In early 1946, it supported the movement of No. 81 (Fighter) Wing to Japan as part of the British Commonwealth Occupation Force. The Squadron was disbanded at Townsville on 10 June 1946.

On 1 June 1966, RAAF Transport Flight Vietnam was redesignated No. 35 Squadron at Vung Tau in South Vietnam. Operating DHC-4 Caribous, the reformed Squadron operated cargo and passenger flights throughout South Vietnam in support of Australian, South Vietnamese and United States forces. During its time in Vietnam the Squadron was nicknamed "Wallaby Airlines", in reference its callsign WALLABY. In early 1970, Aircraft No.293 was lost during a fuel run to an American base close to the Cambodian border; the base was under siege at the time by Viet Cong troops and No.293 received a direct mortar hit in the wing whilst taxiing. After almost five years service No. 35 Squadron departed South Vietnam for RAAF Base Richmond in Australia on 19 February 1972.

In 1974, No. 35 Squadron was relocated north to RAAF Base Townsville where it operated in support of Army units based in Northern Australia. In early 1977 the Squadron's role was expanded when it was equipped with UH-1 Iroquois helicopters in addition to its Caribous, making it the only RAAF squadron to ever be simultaneously equipped with rotary- and fixed-wing aircraft. However, Transport Support Flight Butterworth (with six C47 Dakota and two UH-1 Iroquois) had preceded it as a stand alone unit in this role. No. 35 Squadron's role was further expanded in November 1986 when it was issued with gunship variants of the UH-1.

In November 1989, No. 35 Squadron reverted to a purely fixed-wing role when the UH-1 helicopters were transferred to Army control. The Squadron continued to provide tactical transport to Army units based in Northern Australia until 2000, when it was reduced to 'paper' status, its role being amalgamated into No. 38 Squadron. No. 35 Squadron was formally deactivated on 10 March 2002. 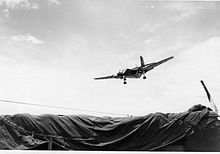 A 35 Squadron Caribou on approach to land during the Vietnam War, 1971