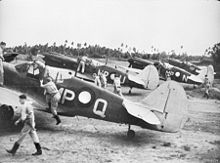 Members of No. 86 Squadron RAAF about to take off in their Kittyhawk fighters at Marauke in April 1944

No. 86 Squadron was a Royal Australian Air Force fighter squadron of World War II. The Squadron was formed in March 1943 and was disbanded in December 1945 after seeing action in the South West Pacific Theatre of the war.

No. 86 Squadron was formed at Gawler, South Australia on 4 March 1943 and was equipped with P-40 Kittyhawk fighter aircraft. The squadron moved to Townsville, Queensland in May where it completed its training. In July, No. 86 Squadron was deployed to Merauke, Dutch New Guinea to protect this base against Japanese air attack. There was little Japanese activity by this stage of the war, however, and the squadron saw little combat. The squadron fought its only major aerial battle on 9 September when it intercepted a force of 32 Japanese aircraft, shooting down three. In addition to its air interception duties, No. 86 Squadron also flew occasional ground attack missions against Japanese positions.

No. 86 Squadron was replaced by No. 120 (NEI) Squadron on 25 April 1944 and returned to Australia. The squadron was reduced to cadre status in June 1944 with all aircraft and most of the pilots being transferred to other units. The squadron received a number of replacement Kittyhawks and conducted routine training until June 1945, when it began the process of converting to P-51D Mustang fighters. The squadron had not completed this conversion by the end of the war, however. No. 86 Squadron was disbanded on 20 December 1945.