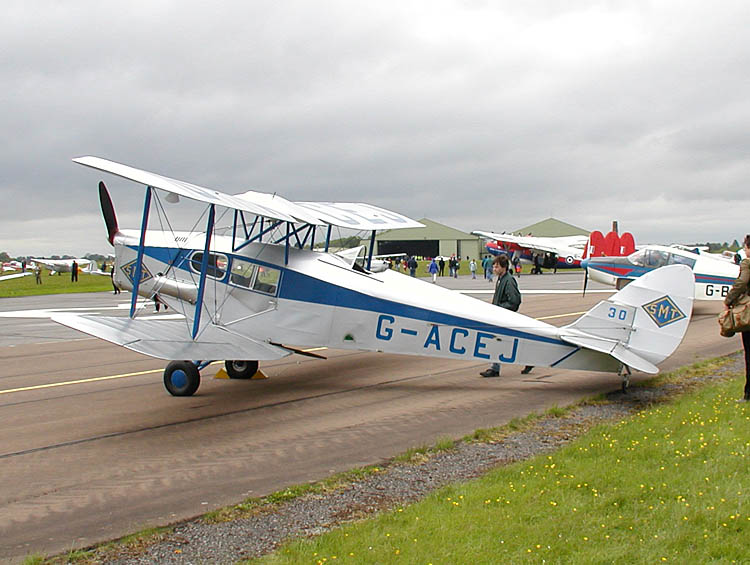 The DH.83 Fox Moth was a successful small biplane passenger aircraft from the 1930s powered by a single de Havilland Gipsy inline inverted engine, manufactured by the Aircraft Company.

The aircraft was designed late in 1931 as a very cheap and economical light passenger aircraft. Many components including the engine, undercarriage and wings were identical to those being used for the then being built in large quantities as a military trainer, which were fitted to the purpose-built wooden, plywood covered fuselage. The pilot sat in a raised cockpit behind the small enclosed passenger cabin, which was usually fitted with four seats for short range hops or three for longer range uses.

The prototype was sent to Canada and gained sufficient interest that two more were built at the company's Toronto plant - it reintroduced series manufacture there in 1946. "Home" production was mostly used on short-haul flights around the British Isles. An exception was the Fox Moth VH-UQM "Miss Currie" that was purchased by for £1,450 and began operating over the 108-mile route over south-eastern between and Whitemark on in October 1932. It was thus the inaugural aircraft of what was to later become .

Total production of the DH.83 Fox Moth was 154, being 98 in England, 2 in Australia and 54 in Canada. A number of different engines were used, including the 130 hp Gipsy IIIA (later Gipsy Major) on most British-built aircraft and the 145 h.p. Gipsy Major 1C on the 52 post-war Canadian-built aircraft.

* DH.83 Fox Moth : Light transport biplane. 98 built in the United Kingdom, plus two more in each of Australia and Canada.
* DH.83C Fox Moth : 52 aircraft were built in Canada after World War II.
* Chidorigo : The Chidorigo was a Japanese-built copy powered by a 150 hp radial engine. Only one aircraft, J-BBJI, was built, by the Japan Aerial Transport Company, who also owned four British-built Fox Moths.