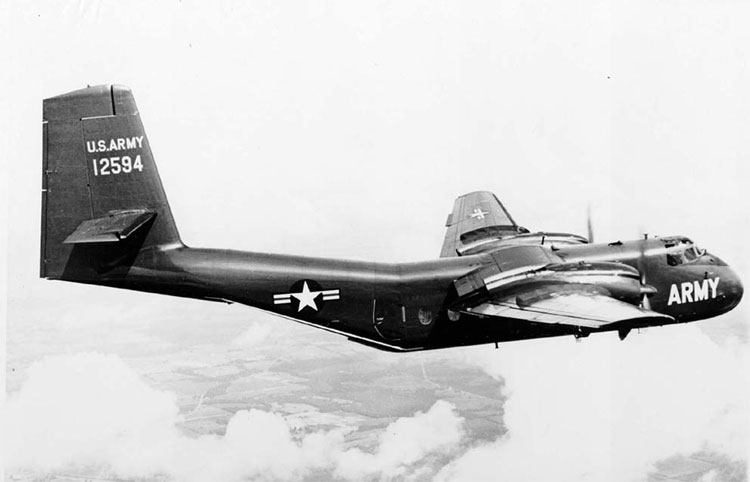 The DHC-4 Caribou (known in the U.S. military as CV-2 and C-7 Caribou) was a Canadian-designed and produced specialized with short takeoff and landing (STOL) capability. The Caribou was first flown in 1958 and although mainly retired from military operations, is still in use in small numbers as a rugged "bush" aircraft.

de Havilland Canada's third STOL design was a big step up in size compared to its earlier and , and was the first DHC design powered by two engines. The Caribou, however, was similar in concept in that it was designed as a rugged STOL utility. The Caribou was primarily a military tactical transport that in commercial service found itself a small niche in cargo hauling. The ordered 173 in 1959 and took delivery in 1961 under the designation AC-1 which then changed to CV-2 Caribou.

The majority of Caribou production was destined for military operators, but the type's ruggedness and excellent STOL capabilities also appealed to a select group of commercial users. US certification was awarded on . Ansett-MAL, which operated a single example in the highlands, and Ecuador were early customers, as was Air America, (a CIA front in South East Asia during the Vietnam War era for covert operations). Other civil Caribou aircraft entered commercial service after being retired from their military users.

Today only a handful are in civil use.

In response to a US Army requirement for a tactical airlifter to supply the battlefront with troops and supplies and evacuate casualties on the return journey, de Havilland Canada designed the DHC-4. With assistance from Canada's Department of Defence Production, DHC built a prototype demonstrator that flew for the first time on 30 July 1958.

Impressed with the DHC4's STOL capabilities and potential, the US Army ordered five for evaluation as YAC-1s and went on to become the largest Caribou operator. The AC-1 designation was changed in 1962 to CV-2, and then C-7 when the US Army's CV-2s were transferred to the US Air Force in 1967. US and Australian Caribou saw extensive service during the Vietnam conflict.

The U.S. Army purchased 159 of the aircraft and they served their purpose well as a tactical transport during the , where larger cargo aircraft such as the and the could not land on the shorter landing strips. The aircraft could carry 32 troops or two s or similar light vehicles. The rear loading ramp could also be used for parachute dropping (also, see ).

In , a political decision was made by the who, believing that all fixed-wing aircraft operations were its own province, demanded that the Army turn over the Caribou. The Army ultimately traded the Caribou to the Air Force in exchange for an end to restrictions on Army operations. In addition, some US Caribou were captured by North Vietnamese forces and remained in service with that country through to the late 1970s.

Most of the C-7s have since been phased out of the US military. Other notable military operators included: Australia, Brazil, Canada, India, Malaysia and Spain.

In current service, the still operates 13 Caribous, which are due to be replaced at the end of 2009, while Brazil's Caribous are slowly being replaced by more modern turboprop cargo airplanes.