No. 33 Squadron is a Royal Australian Air Force transport squadron. It was formed in 1942 for service during World War II. Following the completion of hostilities the squadron was disbanded in 1946. In 1981 the squadron was re-raised as a flight-sized organisation before being expanded to a full squadron again in 1983. It is currently based at RAAF Base Amberley and is part of 84 Wing, Air Lift Group. The squadron is currently in the process of re-equipping with KC-30As, which it will operate in the air-to-air refueling role.

No. 33 Squadron was formed during World War II at Townsville on 16 February 1942, equipped with four Short Empire flying boats transferred from No. 11 Squadron.[1][2] Less than two weeks later the Squadron suffered its first loss when one of the Empires was destroyed in a landing accident at Townsville; the six crewmembers were killed.[2][3] A second Empire was destroyed at its mooring during a Japanese air attack on Broome on 3 March 1942; another Empire was impressed from Qantas to replace the two lost aircraft.[1][4] The Empires were subsequently augmented by a number of smaller types including de Havilland Dragons and Tiger Moths, and Avro Ansons.[1][5] One of the Squadron's tasks was Search-and-Rescue; it lost another Empire on 8 August 1942 after it sank in heavy seas off the coast of New Guinea while trying to rescue survivors of a torpedoed ship.[2] The Squadron transferred to Port Moresby in January 1943, from where it provided air transport to Australian forces involved in the New Guinea campaign. In October that year it was re-equipped with Douglas Dakotas which it operated for the rest of the war; after the war's end in 1945 the Squadron was tasked with repatriating service personnel and former prisoners of war.[5] No. 33 Squadron returned to Townsville on 11 March 1946 before being disbanded there on 13 May.[1] 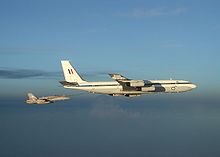 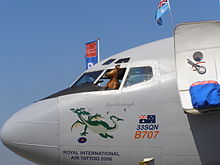 The Squadron was re-formed on 2 February 1981 as No. 33 Flight RAAF, a strategic transport unit equipped with two modified Boeing 707s transferred from No. 37 Squadron.[6] In this role it was also responsible for providing long-range transport to Australian and visiting VIPs. On 20 June 1983, following the acquisition of two further 707s, the unit was again reorganised as No. 33 Squadron.[6] Another two aircraft were purchased in the late 1980s and four airframes were converted by Hawker de Havilland to provide air-to-air refuelling for the RAAF's F/A-18 Hornet fighters,[6] while the remaining 707s continued in the transport role. In 1989 the Squadron helped ferry members of the Australian public when the two domestic airlines were grounded during an industrial dispute. On 29 October 1991 one of the Squadron's transport-configured Boeing 707s was lost when it crashed in the sea off the coast from East Sale, Victoria during a training flight; all five crew members were killed.[7]

Due to the political difficulty of spending public funds on new VIP aircraft the 707 continued to perform these duties long after the high ongoing maintenance costs made it uneconomic. The age of the aircraft meant that Australian ambassadors often had to request special waivers of noise regulations from foreign governments prior to official visits by Australian VIPs. The VIP transport role was eventually relinquished in 2002 when No. 34 Squadron received two Boeing Business Jets.[8] The Squadron saw active service again when it provided air-to-air refuelling support to Coalition forces in the Middle East in 1998 and Afghanistan in 2002. The last Boeing 707 was retired in mid-2008, bringing to an end the 29-year operational history of the type in the RAAF.[9]

Following the retirement of the Boeing 707 in mid 2008 the Squadron relocated to RAAF Base Amberley and temporarily has no aircraft. The Squadron awaits delivery of the new Airbus KC-30A tanker-transport aircraft from 2010, which will be fitted with both drogue and boom systems.[10][11]