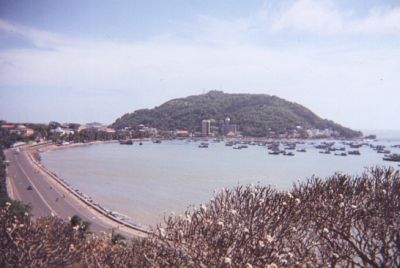 Vũng Tàu audio|Vung Tau.ogg|pronunciation is a city in southern . Its population in 2005 was 240,000. The city area is 140 km² (54 square miles) including 13 urban wards and one village. It is the capital of , and is the petroleum center in Vietnam.

During 14th and 15th centuries, the cape that would become Vũng Tàu was a swamp which European trading ships visited regularly. The ships' activities inspired the name Vũng Tàu, which means "anchorage". The Portuguese navigators passed Vũng Tàu many times and named it after Saint Jacques. The French invaded Vietnam afterwards and called it Cape Saint Jacques. The cliff of Vũng Tàu is now called Mũi Nghinh Phong (literally means “"Cape of breeze welcome"”).

Vũng Tàu was originally referred to as Tam Thắng ("Three Boats") in memory of the first 3 villages in this area: Thắng Nhất, Thắng Nhị, Thắng Tam. It was within the province of under the . Under the reign of king (1761–1820), when Malay pirates built a base here and subsequently became a danger to traders in city, the king sent 3 troupes of army to crack down on the pirates. The pirates were ousted and solders of these troupes were given the land as a reward.

10th February 1859 marks the first use of cannons by Nguyen’s army, when they fired at French battleships from the fortress of Phước Thắng, located 100 m from Vũng Tàu's Front Beach. This marked an important period in Vietnam’s war against French invaders in South Vietnam (then called ).

In 1876, according to a decree by the French colonialists, Vung Tau was merged in county, a part of Saigon administration (French: "circonscription de Saigon").

In 1901, the population of Vũng Tàu was 5,690, of which 2000 persons were immigrants from North Vietnam. Most of the town's population made their living in the fishing industry.

The French governor of Indochina, (who later became ), built a mansion in Vũng Tàu that is still a prominent landmark in the city.

During the Vietnam War, Vũng Tàu was home to the and American support units, and was a popular spot for in-country for U.S. combat troops. After the war, Vũng Tàu was a common launching place for the Vietnamese fleing the communists.

On May 30th 1979, Vũng Tàu town was made the capital of Vung Tau-Con Dao Special Admistrative Zone.

The city is located in the south of Vietnam, and is situated at the tip of a small . It has traditionally been a significant port, particularly during Vietnam's period of French rule. Today, the city's importance as a shipping port has diminished, but it still plays a significant role in Vietnam's offshore oil industry. Vung Tau is the only petroleum base of Vietnam where and gas exploitation activities dominate the city's economy and contribute principal income to Vietnam's budget and export volume.

To most tourists, however, Vũng Tàu is more interesting for its extensive beaches. Tourists always prefer sightseeing at Front Beach (Bai Truoc) but go swimming in Back Beach (Bai Sau). Back Beach is well-known for its over 10 km of fine sand seaside. As Vũng Tàu is only 130 km away from Ho Chi Minh City, it is a favourite resort destination for those wishing to get away from the city. In recent times, the number of foreign tourists visiting Vũng Tàu's beaches increased. Vũng Tàu is also home to one of Vietnam's most well known s. From Ho Chi Minh City, one needs two hours to reach Vung Tau by road (51A Expressway) or an hour and fifteen minutes by express ferry.

A big resort project has just been licensed by the Vietnamese government - the Saigon Atlantis. Upon competition, this entertainment project which requires USD 300 million in capital investment will include resorts, shopping, sailing. [About the project on investor's website [http://www.vvg-vietnam.com/cua_lap.htm] ] . The investor of this project is proposing to raise the investment capital to 4 billion USD. Two other noteworthy entertainment projects awaiting licensing are Vung Tau , which will cost USD 250 million, and Bau Trung, a Disneyland-like entertainment park which will cost USD 250 million. This project includes Landmark Tower, a 88-story skyscraper proposed to be built and completed by 2010 in Vung Tau by a USA-based company, Good Choice Import – Export Investment Inc, once built will likely be the highest building in Vietnam. The project is under consideration for approval by the local provincial government. [Official website of Ba Ria-Vung Tau Province’s government [http://www.baobariavungtau.com.vn/vn/bariavungtau/37033/index.brvt] ] [Vietnamnet online on 30 October 2007, en [http://english.vietnamnet.vn/travel/2007/10/751476/] ]

Vũng Tàu is also of interest for religious reasons. It has about 14 wards with active services. [cite web | title = Catholic Churches in Vietnam | work = Vietnamese Missionaries in Asia | url = http://www.catholic.org.tw/vntaiwan/vnchurch/vnchurch.htm | accessdate = 2007-06-01] A notable monument in the city is a large statue of Jesus, constructed on a hilltop by Vietnam's Catholic minority. It was completed in the early 1970s with the height of 32 m and two outstretched arms spanning 18.4 m. It is considered to be among the tallest statues of in . [ [http://in.reuters.com/article/worldNews/idINIndia-30946720071212 One of Asia's tallest Jesus statues graces Indonesian city] ] The Thich Ca Phat Dai pagoda and Niet Ban Tinh Xa temple, both Buddhist sites, are also significant, drawing pilgrims from around the country.

There has been a Russian village in Vung Tau ever since the Soviet Era; these Russians generally worked for the Russian-Vietnamese joint venture . It is believed that these "Russians", or "citizens of the former Soviet Union", were once the most dominant group of westerners in Vung Tau. Some have remained in Vung Tau after the fall of the Soviet Union.