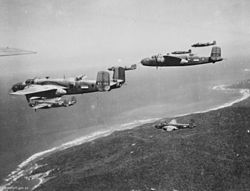 B-25 Mitchell bombers from No. 18 (NEI) Squadron flying in formation near Darwin in 1943

No. 18 (NEI) Squadron was formed at Canberra on 4 April 1942. Like the other two joint Australian-Dutch squadrons the Dutch authorities provided No. 18 Squadron's pilots and aircraft (obtained via Lend Lease). The majority of the aircrew were Dutch while most the groundcrew were Australian.[1] Unlike the other two squadrons, however, the RAAF also provided many aircrew to the squadron.

No. 18 (NEI) Squadron received its first five B-25 Mitchell medium bombers in April 1942. These aircraft were used for both training and anti-submarine patrols. While the Squadron briefly operated 10 A-20 Havoc light bombers in early 1942, it was fully equipped with 18 B-25s by 21 September 1942.

On 5 December 1942 No. 18 (NEI) Squadron deployed to a partially constructed airfield at MacDonald in the Northern Territory of Australia to operate in the North Western Area. The Squadron began flying operational missions in early January 1943 and was primarily tasked with reconnaissance flights and raids on Japanese ships and bases in the occupied Netherlands East Indies. While the squadron suffered considerable casualties in these raids, it did not receive any replacement crews until September 1943. No. 18 (NEI) Squadron relocated from MacDonald to Batchelor in the Northern Territory in May 1943.

Due to the declining Japanese presence in the eastern islands of the Netherlands East Indies the Dutch authorities requested that No. 18 (NEI) Squadron be re-equipped with longer ranged B-24 Liberator heavy bombers but this came to nothing and the Squadron continued to operate B-25s. In July 1945 No. 18 (NEI) Squadron was relocated to Balikpapan in the Netherlands East Indies which had recently been liberated in the Battle of Balikpapan (1945). After arriving at Balikpapan the Squadron's main task was to drop propaganda leaflets and locate and drop supplies to prison camps in the NEI.

The RAAF component of No. 18 (NEI) Squadron was disbanded on 25 November 1945 and the Squadron passed to Dutch control on 15 January 1946. The Squadron relocated to Tjililitan in Java in March 1946 and saw active service against Indonesian Nationalists during the Indonesian National Revolution. Following the end of Dutch rule No. 18 Squadron was the last squadron to be handed over to the Indonesians and was disbanded on 26 July 1950.