Little Italy, sometimes referred to as College Street West, is a district in Toronto, Ontario, Canada. It is well known for its numerous Italian Canadian restaurants and businesses. There is also a significant Latin American and Portuguese community in the area. The district is centred around a restaurant/bar/shopping strip along College Street, the heart of which is the intersection of College and Grace Streets and the adjacent residential area, but spreading out between Bathurst Street and Dufferin Street. The exact borders of the district are imprecise. The area south of College to Dundas Street is almost always considered part of Little Italy. The area north of Harbord Avenue is known as Palmerston or Bickford Park. 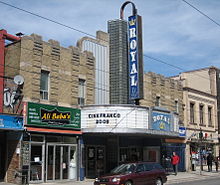 College Street was fully laid out in the area by 1900 and the area was filled with buildings from the early 1900s. College Street is fronted by two- and three-storey buildings, with commercial uses on the ground floor and residential or storage uses on the upper floors.

From Manning Avenue to the east to Shaw Street to the west, there are numerous sidewalk cafes, including Cafe Diplomatico, Bitondos Pizza, Bar Italia, Riviera Bakery, and Sicilian Ice Cream. Two nightclubs have opened on the block between Shaw and Crawford, and there is a small plaza and supermarket on the south side of College between Shaw and Crawford. The curved street between Grace and Crawford was laid out with larger sidewalks. This section was laid out later to cross Garrison Creek, which was buried under Crawford. The wider sidewalks have allowed more extensive cafe patios in this area.

A major tourist attraction of the area is the world's first and only Italian Walk of Fame. Granite and brass stars line the sidewalk with the names of noteworthy italians. At Clinton, on the north side, is the Royal repertory cinema, which was recently renovated and has an upgraded projection system as it is used for movie editing purposes during the day and repertory cinema in the evenings. While the commercial units are dominated by cafes and restaurants, there are numerous other small businesses serving the neighbourhood.

The side streets are mostly detached or semi-detached single family homes dating to the early-1900s Edwardian period, with front porches and smaller lots, as was the custom at the time.

Italians arrived in Toronto in large numbers during the early 20th century. Italians first settled in an area then known as The Ward, centred around University Avenue and College Street. By the 1920s, most Italians had moved west of Bathurst Street and the College-Clinton area had emerged as the city's major Little Italy. The affordable Edwardian homes that line the side streets of this neighbourhood were bought by Italian immigrants, many of whom found work on the railways and in road construction. Italians started businesses on and around College Street.

The first multicultural radio station in Canada was CHIN, launched in 1966 by Johnny Lombardi, and aired from studios on the south side of College between Grace and Clinton, on the second floor of Lombardi's supermarket at 637 College Street. Lombardi first purchased airtime on English radio stations before establishing the Italian-language CHIN Radio. The studio, much expanded, is now located at 622 College Street, and the section of the street has been officially nicknamed Johnny Lombardi Way by the City of Toronto; a historical plaque is installed on the southwest corner of College and Grace Street. Lombardi died in 2002 and CHIN is now run by his son, broadcasting in 30 languages.

The area is much more ethnically diverse today. Italian-Canadians born during the Post-World War II baby boom and Italian immigrants from the 1960s onwards have tended to settle in the Corso Italia neighbourhood around St. Clair Avenue and Dufferin Street and in Toronto's suburbs. There are now further concentrations of Italian Canadians in Downsview in Toronto; Woodbridge and Maple in Vaughan; Richmond Hill, and Mississauga.

Little Italy has also become popular with young people because of its vibrant nightlife and its proximity to the downtown core. Since the 1980s, many young professionals have bought homes in the neighbourhood.

Dewson Street Junior Public School is a public elementary school, located at 65 Concord Avenue, near the intersection of Ossington Avenue and College Street. The school was first built in 1884 with an enrolment of 76 students. The original building consisted of a basement and four rooms on two floors. It was built on land that was formerly part of the Village of Dovercourt, annexed to the City in 1910. In 1965, the Board of Education decided to replace the old building, which, after a series of additions, consisted of 23 classrooms, 4 kindergartens, playrooms and offices. In September 1968 a new three-storey school building was constructed. A new playground opened in the fall of 2002.