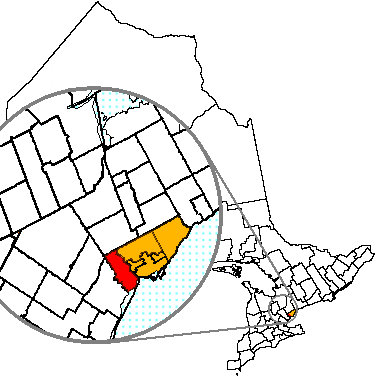 Etobicoke (pronEng|ɛˈtoʊbɨkoʊ audio|etobicoke.ogg|listen) is the western portion of the City of , , , with an official population of 338,117 [http://www12.statcan.ca/english/Profil01/CP01/Details/Page.cfm?Lang=E&Geo1=CSD&Code1=3520019&Geo2=PR&Code2=35&Data=Count&SearchText=etobicoke&SearchType=Begins&SearchPR=01&B1=All&Custom=] as measured by the 2001 Census and 334,491 people as of the 2006 Census. While it only contains 13% of Toronto's population, it occupies about 20% of the total land area. It is bordered on the south by , on the east by the Humber River, on the west by the city of Mississauga and directly next to the border , on the north by the city of Vaughan, and on the north west by the City of Brampton.

Different groups of First Nations peoples used the land that is now Etobicoke at different times. As the gradually moved west from the Atlantic to Lake Erie, it is almost certain that they would have occupied this land at some point. By the time they were mostly settled on the shores of Georgian Bay, The Huron-Wendat were the primary residents of the north shore of Lake Ontario and, somewhere in the 1600s, they were pushed out by the () people. After continued harassment from the south, a coalition of the , and Algonquin nations, known as the Three Fires, gradually pushed the Haudenosaunee off this land and the settled there by 1695, fishing and growing crops more locally in the summer and hunting further afield in the winter. [Mississaugas of the New Credit First Nation and Praxis Research Associates. Date unknown. "The History of the Mississaugas of the New Credit First Nation." Hagersville, ON: Author.]

It is thought that the French explorer, , was the first European to visit the area, circa 1615.

The name "Etobicoke" was derived from the Mississauga word "wah-do-be-kang" ("wadoopikaang") [Nichols, John D. and Earl Nyholm. 1994. "A Concise Dictionary of Minnesota Ojibwe". Minneapolis: University of Minnesota Press] , meaning "place where the black/wild s grow", which was used to describe the area between and the Humber River.

Etobicoke was intended by the British to be included in the of 1787.

The first provincial land surveyor, , also spelled it as "ato-be-coake". Etobicoke was finally adopted as the official name in 1795 on the direction of .

Settlers began to move in from Britain. Early settlers of Etobicoke included many of the , who were given land in the area by Lieutenant Governor Simcoe to help protect the new capital of Upper Canada. In 1795 the Honourable , a captain in the , received a grant of 1530 acres, extending from to Etobicoke Creek, and north to .

The census of 1805 counted 84 people in the township of Etobicoke. In 1806 built a and on the west bank of the Humber river, just south of . The 1809 census counted 137 residents. The Dundas Street bridge opened in 1816, making the township more accessible.

On , the was incorporated. Its purpose was to build and maintain a road to the north-west corner of Etobicoke, where a new community was planned. At the same time, , who had already founded , hired land surveyor to plan a community at the intersection of and Albion Road, to be named . Plan 6 for this community was registered on , . The French master of , , contracted land surveyor to create a plan for the community planned by the Albion Road Company, and Plan 28 was registered for on , .

The township of Etobicoke was incorporated on , .

In 1954, Etobicoke Township became a part of the newly-formed regional government, the Municipality of ("Metro").

In 1967, the township of Etobicoke was merged with three small lakeside municipalities &mdash; Long Branch, New Toronto, and Mimico &mdash; to form the borough of Etobicoke. The borough was reincorporated as a city in 1983.

In 1998, six local municipalities (including Etobicoke) and the Metropolitan Toronto government merged to form the amalgamated city of Toronto.

Etobicoke has the lowest population density out the former cities and boroughs that currently make up the city of Toronto. This is mainly due to its expanses of industrial lands. Several major freeways are routed through the area, making the area ideal for automobile-based transportation. Public transit does not serve the area well, with few rapid transit connections.

Many exceptions to Toronto's gridded street matrix are found in Etobicoke. A number of overpasses and awkward intersections, such as Bloor/Kipling/Dundas West, have been created in an effort to reconcile the grid with these planning anomalies.

Etobicoke has numerous public parks, notable among them is "James Gardens" on the banks of the Humber River. The park includes seasonal flowers, walkways, a rock garden, streams, and waterfalls. It is a very popular site for taking photographs. The Humber Bay park is mostly located in Etobicoke.

The central/southern areas of Etobicoke are better served by public transit and closer to the city centre. These areas, such as , and , consist of large green spaces, numerous parks, golf courses (including , ranked 3rd best in Canada) [http://www.scoregolf.com/golf-course-guide/name.cfm/St-Georges-Golf-Country-Club-facility-overview/Toronto/Ontario/x10-11871-001/] , numerous restaurants and cafes, and fine boutiques. Residential development consists primarily of single-family dwellings. Kingsway South neighbourhood has attracted many affluent individuals and families (as of 2001, over 50% of households have an income in excess of C$100,000/year) [http://www.toronto.ca/demographics/pdf3/cpa15.pdf] , and remains one of Toronto's more prominent neighbourhoods.

The central areas of Etobicoke, although farther from the subway line, are still well-served by public transit buses. These neighbourhoods are generally .

Unfortunately, some areas in Etobicoke have become neglected, "inner-ring" suburbs, such as . infrastructure built in the 1960s is in a state of disrepair. These areas are dominated by unadorned, single-story development and treeless, tarmac-covered prairie. Deflated real estate values have made these areas concentrated areas of poverty and crime. These central and northern areas of Etobicoke contain numerous high-density apartment complexes set in the middle of sizable, open fields and parks.

Mayors and Reeves of Etobicoke

West Glen Junior School, located on Cowley Avenue, educates in grades JK-5. The school was founded in 1953 and the principal is Jeanette Lang. An English-language school, it is attended by around 240 students.

[http://www.etobigo.ca EtobiGO.ca is the portal for all things Etobicoke! From restaurant reviews to weather and traffic.]

[http://www.etobigo.ca EtobiGO.ca is the portal for all things Etobicoke! From restaurant reviews to weather and traffic.]