Ontario Place is a multiple use entertainment and seasonal waterfront park attraction located in Toronto, Ontario, and owned by the Crown in Right of Ontario. It is administered as an agency of the Ontario Ministry of Tourism and Culture. Located on the shore of Lake Ontario, just south of Exhibition Place, it is approximately 4 km west of Downtown Toronto. This premiere attraction opened on May 22, 1971 and consists of three artificially constructed, landscaped islands. Attractions are spread throughout the park, as well as walking trails and food and drink concessions. Traditionally targeted at a family audience, with emphasis on children's activities, the park has a seasonal operating schedule and is closed from October through April, with the exception of the Cinesphere IMAX theatre and private event space. Central to the complex is a public marina and a major concert theatre. Historically, Ontario Place, as a publicly subsidized provincial agency, aims to keep costs, especially for families, lower than comparable attractions. Celebrating its 40th anniversary in 2011, Ontario Place will offer free admission to the grounds. The park will also feature over 30 exhilarating rides and attractions plus the newly renovated Cinesphere, now in IMAX® 3D and the expanded Soak City waterpark with its own lounge pool and sand beach right at the water’s edge overlooking Lake Ontario. 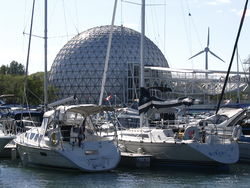 Even as far back as the 1960s, Toronto was concerned about its waterfront being a 'people friendly' place. It had suffered through more than a century of intense industrialization which cut the city off from the lakefront. By the late 1960s, half a century of automobile-centric lakeside planning had made the Toronto waterfront an unappealing, heavily industrialized location, despite its obvious potential.

Ontario Place was conceived to help to revitalize the waterfront, attract tourists to Toronto, and in part, appease the City, which was frustrated at the high level of government investment that flowed to rival Montreal for Expo 67.

The park itself was originally conceived as an onshore exhibit, but this idea was discarded in favour of five large, architecturally unique, three-level Pods. Each Pod would be approximately 8,000 square feet (743 m²) in area, and suspended by steel cables from four large central pylons driven deep into the lake bed. These Pods would initially house various Ontario-themed exhibits in an aquatic setting somewhat similar in concept to Montreal's Expo 67 grounds (which were in the middle of the St. Lawrence River). However, a difficult but unexpectedly useful problem developed. The cost of the open-water Pod foundations alone (at the time, estimated at C$9 million) would consume almost the entire budget for the Pods' construction. Architect Eb Zeidler was faced with a dilemma: how to construct the Pods without the necessary budget.

Zeidler developed an innovative solution: after a trip to the Caribbean, he realized that a "barrier reef" concept would cut down on wave action from the lake enough to reduce the cost of the Pods' foundation to 1/10 of the original open-water estimate. After some quarrels with the port authorities (due to the dangers of the unseen reef to shipping), the reef plan was modified to incorporate three artificial "barrier islands" made from city landfill. Ironically, the barrier islands were to be so well crafted, they became an integral part of the Ontario Place experience.

Ontario Place served as a filming location for the episode Angel Of Death from the TV series War Of The Worlds in which it was the setting for the shootout at the end of the episode where Dr Harrison Blackwood, his team, and a supposed alien ally confront the evil aliens which are personally led by the alien advocacy. 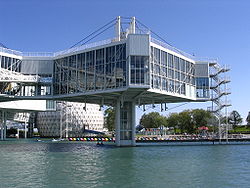 Ontario Place Pods are anchored into the water.

The five steel and aluminum pavilion pods are square with 88-foot (27 m) sides. The pods are supported on four pipe columns, rising 105 feet (32 m) above the lake. Tension cables support the short-span trusses. They sit on concrete filled caissons, driven 30 feet (9.1 m) into the lake's bedrock. Each of the pavilions is connected to one another and the land by glazed steel bridges.

The Forum, an outdoor concert venue, was featured on a central hub-island, while a children's village would occupy an eastern island. A commercial section overlooked the water, with modular construction for shops and restaurants to the west. All would be connected by an intricately planned set of walkways and bridges. In addition, each island would have a unique colour scheme, and the entire complex was later infused with the brilliant colours and graphic design that were typical of the late 1960s and early 1970s.

The open-air Forum theatre sat 3,000 and had additional grass 'seats'. The roof structure was a hyperbolic paraboloid positioned on cement bastions. It covered a 68-foot (21 m) revolving stage, giving near 360 degree sightlines. The roof was made out of tongue and groove plywood, covered by copper sheathing.

The sophistication of the original barrier island layout should be noted. Architect Michael Hough overlaid a scale model of the University of Toronto's excellent walking paths onto the Ontario Place plans to check for appropriate walking distances. This ensured that comfortable rest areas were placed appropriately, so that children and the elderly would not need to walk too far without a comfortable seat. Soon after opening in 1971, a rubber-wheeled tractor train was used to take visitors between key points on the various islands, though this has long since been discontinued.

Prevailing wind and wave conditions were also considered in the design, a scale model of which was tested in the University of Toronto's wind tunnel. Large earthwork berms planted with tall native Ontario trees were created to shelter walkways from the prevailing southwesterly winds.

To the south, a cost-effective and theme-congruent plan to sink three large obsolete Great Lakes shipping vessels was implemented, which sheltered the artificial harbour from intense open-lake waves. (The same technique would later be used on Toronto Island and the Outer Harbour.) The first phase of construction was the sinking of the ships onto a stone bed, then covered in concrete forming a 1,500-foot (460 m) breakwater. Once the perimeter was finished, work began on the 50 acres (200,000 m2) of the three artificial islands.

There was originally some controversy about allowing a public facility to house an upscale boating dock within the new artificial harbour. However, supporters of the plan believed that the dock's integration into Ontario Place would tie the location closer to the lake via boating activity, and improve the general ambiance.

The Cinesphere is an 800 seat 70 mm IMAX theatre - the world's first permanent IMAX installation. The building is inside a 'spherical triodetic dome', with a 61-foot (19 m) outer radius, and a 56-foot (17 m) inner radius. The dome is supported by prefabricated steel aluminum alloy tubes.

Ontario Place was designed to have a modular use and appearance. Zeidler says that the structures were designed to "give an illusion of dimensionless space, exploiting technology to shape the society of tomorrow." (quote from pg. 159 of Modern Canadian Architecture ISBN 0-88830-248-7)

To commemorate the opening of the theme park and promote the province of Ontario, a multi-media exhibition was created and presented inside the pavilion. Dolores Claman wrote the music and Richard Morris wrote lyrics for the music to this presentation, entitled "Theme from Ontario Place". "Theme from Ontario Place" was subsequently released by the Ontario Department of Trade and Development as a double sided 45 manufactured by Quality Records (OP1971), side A containing a "Pop" version and Side B an "Easy Listening" recording. A photo of the still under construction Ontario Place was used on the cover.

The original park has been considerably altered since its inception. The popular outdoor concert stage, The Forum, was torn down in the mid-1990s and replaced with the Molson Amphitheatre, a much larger facility based on a bandshell design. A boat-based water ride was added to the extreme western end of the island, along with a smaller exhibition center consisting of three concrete silo-like buildings connected by overhead walkways, and a smaller domed movie theatre. A large reflecting pool nearby was drained and used to house the addition of a major "climber" structure, a smaller stage for kids shows and several other kid-oriented attractions, reducing the complete separation of areas that had been featured in the original design.

The original children's area, which was primarily "non-powered", has largely been removed. The large wood-and-rope climber area was replaced with a large waterpark and several small fair-ground rides were later added. The large tension structure tent that covered most of the children's park was removed in 2009/10, leaving a large open area with a new stage. Many of the concrete bollards used to secure the various tents and structures can still be seen.

In the summer of 2010, the provincial government issued a Request for Information calling for ideas from private bidders to completely redevelop the park. Ontario Place general manager Tim Casey told the Toronto Star that "2011 will be our 40th anniversary. It definitely needs a revitalization, that’s no surprise. It’s a blank slate, we’re open to just about anything.”[1]

The deadline for ideas to be made is September 10, 2010 with a formal Request for Proposals to be made in the fall and the winning proposal to be chosen by the summer of 2011. The government intends to transform the park from a largely seasonal facility to a year-round attraction. Redevelopment may include tearing down the Cinesphere as well as other long standing attractions.[1] 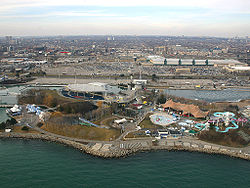 Ontario Place has rides and attractions, including the world's first permanent IMAX movie theatre: the Cinesphere.

Ontario Place's address is 955 Lake Shore Boulevard West Toronto, Ontario M6K 3B9. It is located on Toronto's waterfront, south of Exhibition Place, between Dufferin Street and Strachan Avenue, Ontario Place is easily accessible by car. The nearest TTC and GO Transit station is Exhibition, underneath the Gardiner Expressway, a 10 minute walk away unless the CNE is holding an event blocking the route in which case it a lot longer.