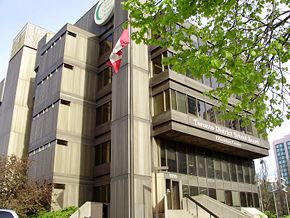 The TDSB Education Centre, located at 5050 Yonge Street, is the headquarters of the Toronto District School Board.

Toronto District School Board, also known by the acronym TDSB, is the English-language public school board for Toronto, Ontario, Canada. The minority public francophone (Conseil scolaire Viamonde), English Catholic (Toronto Catholic District School Board), and French Catholic (Conseil scolaire de district catholique Centre-Sud) communities of Toronto also have their own publicly funded school boards and schools that operate in the same area, but which are independent of the TDSB. Its headquarters are in North York.[4]

The TDSB board was created in 1998 following the merger of the school boards of York, East York, North York, Scarborough, Etobicoke, as well as the Toronto and Metropolitan Toronto Public School Boards.

The head office moved from the old Toronto Public Board of Education office at 155 College Street to the 5050 Yonge Street location, adjacent to Mel Lastman Square. Prior to the 1998 amalgamation of Metropolitan Toronto, the building was occupied by the North York Board of Education.

The TDSB is the largest school board in Canada[5] and the 4th largest in North America.[citation needed]

Dr. Christopher Spence, the former Director of the Hamilton-Wentworth District School Board and a former teacher in the TDSB system took office[7] as the new Director on July 1, 2009. He was preceded by Gerry Connelly.

The school board's organizational mission is "to enable all students to reach high levels of achievement and to acquire the knowledge, skills, and values they need to become responsible members of a democratic society."[8]

Parent and Community involvement occurs at all levels of the school board system, from parental involvement at local schools, the involvement of local organizations at the school level and formal advisory committees at the Board level.[9]

There has also been an effort to include more student involvement in the Toronto District School Board. The "Super Council" is an organization which acts as a student council for the entire board.[10] There has also been an attempt to place student input in the TDSB's Equity Department through the second, and last, board-wide student group: Students Working Against Great Injustice.[11] Both groups have put together various events and have had much success in giving input towards the decisions of the Board.[12]

Since the establishment of the Toronto District School Board in 1998, the Ontario College of Teachers had publicly released detailed information about disciplinary cases with incidences dating back to the 1960s. The Discipline Committee held public hearing into allegations of professional misconduct and incompetence against twenty-one Toronto District School Board Teachers up until 2006. Many of the cases involved physical, sexual and psychological abuse against students. All twenty-one Teachers had their Certificates of Qualification and Registration revoked. Some of the cases involved criminal charges, with jails terms against teachers in addition to the disciplinary action from the teachers college. [2] [3][4][5][6][7][8][9][10][11][12][13][14][15][16][17][18][19][20][21][22][23]

In 2005, controversy erupted when the TDSB's Board Chair Sheila Ward and Executive Officer of Student and Community Equity, Lloyd McKell, spoke in favour of “Black-focused schools”.[14][15] The proposal brought about a media backlash, as many interpreted this as a "Black-only" school. After long and sometimes raucous debate, the proposal for an Afrocentric school was adopted and registration began.[16] Similar controversy had taken place in the North York Board of Education in the 1980s when the board attempted to turn Georges Vanier Secondary School into a black-only school. [26]

In 2002, the Government of Ontario stripped all power and authority from the school board trustees because they failed to balance the board's budget. Paul Christie was appointed by the province to serve as supervisor of the Toronto District School Board, with authority for all financial and administrative functions of the Board. This allowed Christie to supersede the authority of elected school trustees. The provincial government argued that the appointment was necessary, as the TDSB had not submitted a budget to the Ontario Minister of Education as legally required. Representatives of the TDSB claimed that they could not find the necessary operating expenses for the year, given provincial regulations which prohibited deficit spending. Christie balanced the TDSB's budget through a dramatic spending reduction of $90 million. Under his watch, the TDSB eliminated many secretarial positions, phased out school-community advisors, reduced the number of vice-principals, cut outdoor education and adult education, and re-evaluated the position of social workers in the system. Christie's staff reports were not made public, and some critics argued that there were no adequate checks or balances on his authority.[17] In 2007, again due to alleged mismanagement by the trustees, the board will try to submit a budget with a deficit of $84 million. [27]

In December 2001, a $70 million class-action lawsuit was filed against the Toronto District School Board on behalf of the parents of special needs students who were sent home during the boards support workers strike in April 2001. The suit claimed that 27,000 special needs students were discriminated against on the basis of their disabilities because they were sent home during the month long strike while the schools stayed open for their able-bodied counterparts. The claims were based on the fact that they weren’t permitted to go to school and missed a month of school while everyone else was able to go. The suit also claimed that the Toronto District School Board should stop treating special needs students as lesser students. The four-week strike, led by 13,000 support workers ended in early May 2001.[18]

In 2001, Toronto School Board Trustee Sam Basra was convicted of Immigration Act charges and was forced under the Education Act to resign his seat. He pleaded guilty in August 2001 to selling fake offers of employment to potential immigrants for US$1,500.00 each. This came to light after being tipped by a former employee, police raided Basra's paralegal firm and found 250 false letters of employment. In March 2001 Arjan Singh launched a $15 million lawsuit against Basra alleging that while doing paralegal work, Basra forged documents to make him think his rights case was active more than a year after it was closed. After much infighting among the trustees and display of lack of leadership from then Chair of the Board Donna Cansfield to make an appointment to fill the vacant trustee seat left by Basra, a by-election was called for April 2002 costing the board $160,000.00. Stan Nemiroff defeated former Mayor of Etobicoke Bruce Sinclair in the by-election to become the new Ward 1 trustee representing Etobicoke North.[28][29][30][31]