PATH is a 28-kilometre (17 mi) network of pedestrian tunnels beneath the office towers of Downtown Toronto, Ontario, Canada. According to Guinness World Records, PATH is the largest underground shopping complex in the world with 371,600 m² (4 million sq. ft.) of retail space.[1] 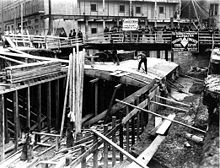 The first tunnel under construction in 1900 for Eaton's

In 1900, the Eaton's department store constructed a tunnel underneath James Street, allowing shoppers to walk between the Eaton's main store at Yonge and Queen streets and the Eaton's Annex located behind the (then) City Hall. It was the first underground pedestrian pathway in Toronto, and is often credited as a historic precursor to the current PATH network. The original Eaton's tunnel is still in use as part of the PATH system, although today it connects the Toronto Eaton Centre to the Bell Trinity Square office complex (the latter of which stands on the site of the former Annex building). 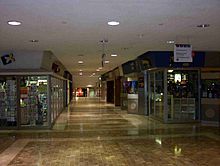 An underground shopping area in the financial district. (The PATH signage is shown hanging from the ceiling on the upper right side of the photo)

The current PATH system began under city planner Matthew Lawson in the 1960s. Toronto's downtown sidewalks were overcrowded, and new office towers were removing the much-needed small businesses from the streets. Lawson thus convinced several important developers to construct underground malls, pledging that they would eventually be linked. The designers of the Toronto-Dominion Centre, the first of Toronto's major urban developments in the 1960s and completed in 1967, were the first to include underground shopping in their complex, with the possibility of future expansion built in. The city originally helped fund the construction, but with the election of a reform city council this ended. The reformers disliked the underground system based on the Jane Jacobs notion that an active street life was important to keeping cities and neighbourhoods vital and that consumers should be encouraged to shop on street level stores rather than in malls (whether they be above ground or below); however, the system continued to grow, as developers bowed to their tenants' wishes and connected their buildings to the system. This also converted low-valued basements into some of the most valuable retail space in the country.

The first expansion of the network occurred in the 1970s with the construction and underground connection of the Richmond-Adelaide office tower and the Sheraton Centre hotel complex.

In 1987, City Council adopted a unified wayfinding system throughout the network. The design firms Gottschalk+Ash International and Muller Design Associates were hired to design and implement the overall system in consultation with a diverse group of land owners, City staff and stakeholders. A colour-coded system with directional cues was deployed in the early 1990s. Within the various buildings, pedestrians can find a PATH system map, plus cardinal directions (P (red) for south, A (orange) for west, T (blue) for north, H (yellow) for east) on ceiling signs at selected junctions.

The signage can be hard to find inside some of the various connected buildings. Building owners concerned about losing customers to neighbouring buildings insisted that the signs not dominate their buildings, or their own signage system. The city relented and the result is the current system. Many complain that the system is hard to navigate.[2]

The City of Toronto released a long-term expansion plan for the PATH. As part of the expansion plan there will be 45 new entry points, and the walkway expanded to as long as 60 kilometres when changes are completed. [3] The city of Toronto is constructing a 300-metre, $65 million (EUR 50 million US$65.8 million) tunnel connecting Union Station to Wellington Street, the first publicly-owned segment of the 4,000,000-square-foot (370,000 m2) PATH subterranean shopping district. Toronto planners have begun work to guide future PATH development and ensure PATH link construction is included in basement levels of key new buildings.[4]

There are more than 50 buildings or office towers that are connected through the PATH system. It comprises twenty parking garages, five subway stations (Osgoode station connects only to the Four Seasons Centre), two major department stores, two major shopping centres, six major hotels, and a railway terminal. The CN Tower and Rogers Centre are connected via an enclosed elevated walkway, called Skywalk, from Union Station.