Old East York is a neighbourhood in the city of Toronto located in the former East York. While East York was a much larger area, the name has been kept as a reminder to the days before the mega city. There are multiple definitions of its extent, but at its largest Old East York has covers the portion of the former city south of Taylor-Massey Creek and the Don Valley Parkway. It thus stretches from the Don River in the west to Victoria Park Avenue in the east. The southern border is the old boundary between East York and Toronto.

The area is primarily made up of single detached homes and ownership is well above average (at over 65%). Most of the houses are small bungalows constructed in the post-war era, but today many are being torn down and replaced by larger houses. The area is middle class primarily and while once dominated by seniors, many are moving on and younger families are finding an affordable neighbourhood within fairly close proximity to the city centre.

The people in the area are predominantly of British, Irish and Greek descent.[1] 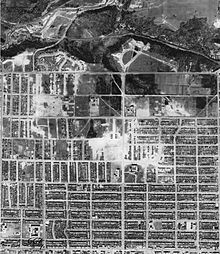 Glebe land Much of the central section of what became East York was first set aside as 'Clergy Reserves', called 'Glebe land', a hotly debated feature of the original system of land granting in Ontario which retained land for the use of the church. Arguments over which church should have the use of this land led to the eventual sale of the clergy reserves, most of which had remained undeveloped for many years as surrounding areas were cleared and built on. The clergy lots between Donlands (originally a part of Leslie Street) and Woodbine only began to be developed after the construction of the Prince Edward Viaduct and Leslie Bridge and successful development of the old Todmorden postal village west of Donlands as Pape Village.

Todmorden Village To the north of O'Connor (which splices down the middle of the neighbourhood) is Todmorden village. Much of the village lies atop the Don Valley Ravine which is lined with forest. Mature trees are a big presence in this area of the neighbourhood and create an extremely peaceful and natural area, rarely found this close to downtown Toronto. Where Pape and the Donlands head north past O'Connor is a gorgeous area consisting of very few streets and beautiful homes.

Woodbine Heights This section of Old East York is bounded by Coxwell on the West, Main on the East, the Don Valley Ravine on the north and Milverton on the south. Its main foci are the "Olde East York Village", located Coxwell Avenue, north of Mortimer [2], and the Woodbine Village, located along the Woodbine north of Sammon. Housing stock in this area consists primarily of single-family homes, and is typified by distinct, narrow-lot variants of Dutch Colonial Revival and English Cottage architecture, built before 1920.. Until recently, this neighborhood was inhabited by many retirees. However, it is increasingly populated by young upper-middle-class families employed along Danforth and in Toronto's downtown.

Crescent Town to the far east is a collection of apartment towers that acts as an immigrant reception area, primarily for new immigrants from South Asia.

Broadview North is a neighbourhood bordered by Pape Avenue to the East, Chesterhill to the South and the DVP to the west and north. The area is dominated by renters and high rise buildings. There are numerous low income buildings in the area, however, renting (at over 70%) is certainly the norm in this area. However at the very north the area contains many bungalows, many of which are being redone into 2-storey houses because of the decent area and the considerably low housing price. The area has significant Greek and Serbian populations.