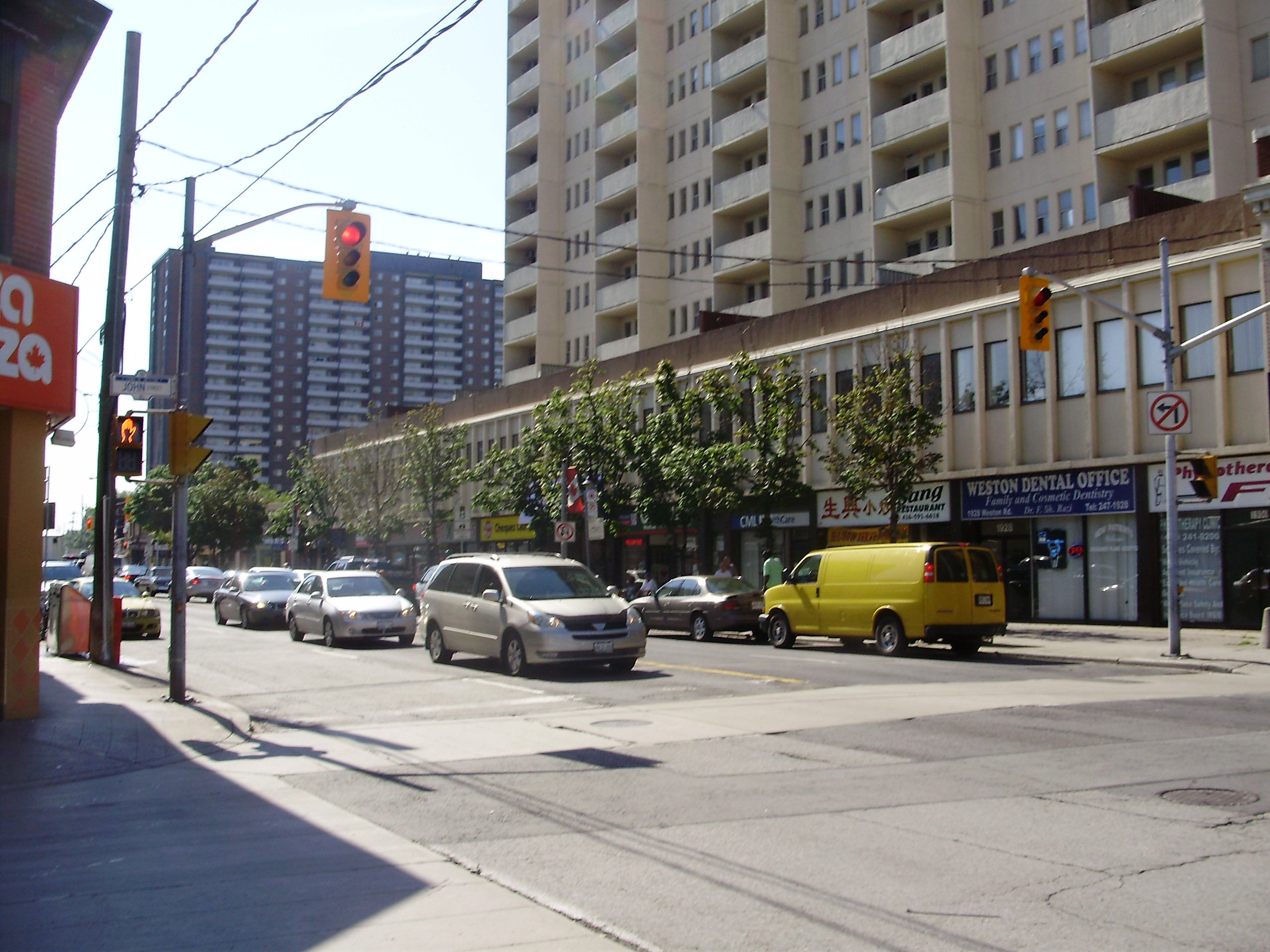 Weston is a neighbourhood in , , in the northwest end of the city, within the former boundaries of the old city of York. The neighbourhood generally lies south of Highway 401, east of the Humber River, north of , and west of .

In addition to its traditional Anglo-Canadian roots, Weston is currently home to people of various cultures and ethnicities from around the world. [cite web|url=http://www.toronto.ca/demographics/pdf2/cpa113.pdf|title=Weston 2006 Social Profile #2|publisher=City of Toronto|accessdate=2008-08-28]

The first European settlement in the Weston area took place in the 1790s, when a was built on an old native trading path along the west side of the Humber River, named after the well-known in , . In 1815 James Farr, a prominent local mill owner, named the growing settlement "Weston" after his birthplace, . Weston initially developed along both sides of the river until a disastrous flood in 1850 destroyed the west bank settlement.

The town of Weston grew, and over the 19th century became an important industrial centre for the Toronto area. The symbol adopted for the town, an outline of an old-fashioned bicycle, was based on this history of manufacturing and especially the old CCM bicycle factory on Lawrence Avenue just east of Weston Road. Models of bicycles now hang from the streetlights along Weston Road.

In October 1954, flooded the Humber River valley, causing death and destruction of property.

Weston was incorporated as a village in 1881, and then as a town in 1914. In 1967 it became part of the Borough (later City) of York. In 1998, York was in turn amalgamated with the five other members of , (Toronto, , North York, East York, and Scarborough) in the new "megacity" of Toronto.

Although the Town of Weston has not existed as a legal reality for almost forty years, the area continues to be known as "Weston" and Weston is still a valid mailing address. [ [http://www.canadapost.ca/cpc2/addrm/hh/current/details/cdONuM9L-e.asp Summary for Weston] . . Accessed 2008-08-21.]

Weston's building stock consists mostly of Victorian homes east of the railway with apartment and condominium towers on Weston Road overlooking the Humber River valley. Weston's main shopping district is located on Weston Road between Church Street in the north and Wilby Crescent (just south of Lawrence Avenue) in the south. Most buildings in this area reflect early-mid 1900's Ontario town architecture, brick buildings with decorative masonry. The town has a historic library (previously a Mechanics' Institute and ). The community is also dotted with grand old churches with historical architectural significance. There has been a recent move in Weston to designate certain areas as a historical district [ [http://www.toronto.ca/heritage-preservation/hcd_weston.htm Heritage Conservation Districts – Weston] . City of Toronto. Accessed 2008-08-21.] . Most streets in Weston are lined with huge mature trees, some well over 100 years old. This is more common east of the railway tracks. Recently there has been some infill development on former industrial and commercial lands bringing some new housing stock to the area. An art community is beginning to develop around Weston Road and John Street.

Weston is also served by GO Transit's which is a station on the , providing heavy interurban transit throughout the Greater Toronto Area.

Public transit accessibility for the disabled

As of February 2008 [cite web|url=http://www.toronto.ca/ttc/pdf/accessmap0802.pdf|title=Accessible Transit Network map|publisher=TTC website|accessdate=2008-08-28] , the 79 Scarlett, which travels on Lawrence Avenue, and the 35 Jane on the eastern border of Weston, are the only TTC bus routes that serve areas within Weston's recognized borders.

Weston has many small parks throughout but most notable is Cruickshank Park in the Humber River valley with many mature trees and paved [ [http://www.toronto.ca/parks/brochures/parks_trails_2.pdf Toronto Parks & Trails Map 2001] . Accessed 2008-08-27.] lined with large trees. The bicycle path continues south to . Sometimes can be seen swimming upstream in the river. The park has a population of as can be seen the from the tell-tale marks left behind on trees. In order to protect some trees, park staff have wrapped the tree trunks with wire screen in some areas. There are also some s closer to the waters edge and s hidden away in the more secluded areas. , s, s and s are a common sight. In some areas of the park, you can see exposed in the walls of the valley, made visible by the action of glaciers that carved out the valley during the about 20000 years ago. The same rock was used to build many stone retaining walls throughout the town; an example of this use can be seen on the south end of the Lawrence Avenue bridge in the north end of Lions Park.

Of late, the issue of the proposed high-speed rail link between and Union Station downtown has become a hot political issue in Weston. So called for its planned 22 minute travel time from end to end, it had originally been proposed for completion by 2009. Under the current proposal, there is no plan for the line to stop in Weston where the route would pass. Weston is currently a station stop on the operated by . If approved, the link would see the construction of three additional tracks through the neighbourhood and would increase rail traffic more than fourfold. Community activists are worried about the link severing the community (vehicle traffic on one street will be permanently blocked from crossing the tracks, replaced by a pedestrian bridge) and the possibility of lower future property values due to increased noise and fumes. It was an issue during the Canadian federal election held on , where incumbent Liberal Member of Parliament, , supported the link, while the other candidates opposed it. It is also an issue in the February 2007 provincial by-election, where all local candidates came out against the link, but which was still supported by the governing Liberals. Current plans for the link are still on the table and the project is expected to go ahead in its original form despite the various alternatives presented by the Weston Community Coalition (WCC). The WCC has proposed a subway line as an alternative to run through the Weston rail corridor to the airport that would have stops along the way which would serve many communities throughout Toronto and be operated by the TTC rather than a private company. Various other alternatives were presented by community activists such as an Eglinton subway to the airport or a route down Highway 427.