Vratislaus I, Duke of Bohemia

Vratislaus I, Duke of Bohemia 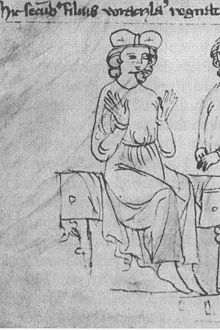 He was the son of Duke Borivoj I of Bohemia by his wife Ludmila, and the younger brother of Duke Spytihnev I.

By his wife Drahomíra, a Hevellian princess, Vratislaus had at least two sons, Wenceslaus and Boleslaus (also called Boleslaw I), who both succeeded him as Bohemian dukes. Střezislava, the wife of the Bohemian nobleman Slavnik, founder of Slavnik's dynasty, is also by some historians supposed to be a daughter of Vratislaus.

Upon the death of his elder brother Spytihnev in 915, Vratislaus became Bohemian duke at a time when his duchy had already turned away from Great Moravia and had fallen under East Frankish, especially Bavarian influence. The Annales Fuldenses report that in 900 the Bavarians had attacked Moravia in alliance with the Bohemians. On the other hand Vratislaus supported the Magyars on their 915 campaign against the Duchy of Saxony under Duke Henry the Fowler.

Vratislaus is credited with the donation of St. George's Basilica at Prague Castle and also with the foundation of the Silesian city of Wrocław (Vratislavia). He died (possibly in 919, although 921 is more often conjectured) in battle against the Magyars.