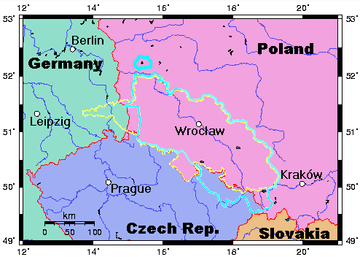 Historic Silesia, superimposed on modern international borders: The mediæval Bohemian crown land (as of 1538) outlined in cyan, Prussian Silesia as of 1815 in yellow 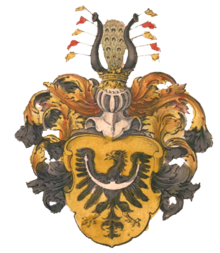 Coat of Arms of Lower Silesia 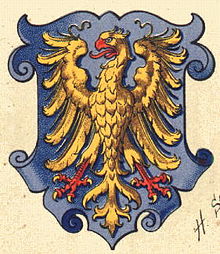 Coat of Arms of Upper Silesia

Silesia is rich in mineral and natural resources, and includes several important industrial areas. Silesia's largest city and historical capital is Wrocław. Other large cities are Opole and Katowice in Poland, Ostrava and Opava in the Czech Republic, and Görlitz in Germany. Its main river is the Oder (in German; in Polish and Czech: Odra).

Silesia's borders and national affiliation have changed radically over time, both when it was a hereditary possession of noble houses and after the rise of modern nation-states. The first known states to hold power there were those of Greater Moravia at end of 9th century and Bohemia early in the 10th century. In the 10th century Silesia was incorporated into the early Polish state, but it later broke into independent duchies, coming under increasing Czech and German influence. It came under the rule of the Crown of Bohemia, which passed to the Austrian Habsburg Monarchy in 1526. Most of Silesia was conquered by Prussia in 1742, later becoming part of the German Empire and German Reich up to 1945. After World War I (1918) the easternmost part of this region was awarded to Poland by the victorious Allies after rebellions by Silesian Polish people and a plebiscite. After World War II (1945) the bulk of Silesia was transferred to Polish jurisdiction and become legally and politically part of Poland. Meanwhile the remaining small parts of Silesia mostly went to Czechoslovakia after World War I, and are now in the Czech Republic.

Most inhabitants of Silesia today speak the national languages of their respective countries (Polish, Czech, German). There is an ongoing debate whether a local Silesian speech should be considered a Polish dialect or a separate language. There also exists a Silesian German or Lower Silesian language, although this form of German is almost extinct.

Ślęża is listed as one of the numerous preindoeuropean topographic names in the region (see old European hydronymy).[1] 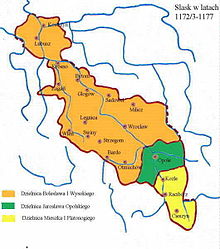 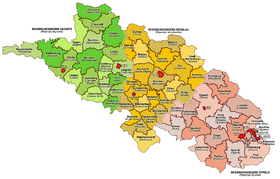 Silesia has been inhabited from time immemorial by people of multiple ethnic groups. In the 4th century b.c. Celts entered Silesia. They had their main settlements around the Mount Ślęża near the modern Wrocław, Oława and Strzelin.[2] Germanic tribes were first recorded within Silesia in the 1st century. Slavic peoples arrived in this territory around the 7th century.[3] In the early 9th century the Slavic settlement stabilized. Local Slavs started to erect defence systems such as Silesian Przesieka and the Silesia Walls to guard them from the peoples of the West. In those days the eastern border of Silesian tribes settlement was situated to the west of the gród Bytom, and east from Racibórz and Cieszyn. East from this line dwelled a closely related Slavic tribe - Wiślanie. Northern border was situated in the valley of the Barycz river, north of which dwelled Polans.[4]

The first known states in Silesia were the Czech proto-states of Greater Moravia and Bohemia. In the 10th century, Polish ruler Mieszko I of the Piast dynasty incorporated Silesia into the Polish state. During the Fragmentation of Poland, Silesia, as well as the rest of the country, was divided among many independent duchies ruled by various Silesian dukes of the Silesian Piasts. During this time, cultural and ethnic German influence increased due to immigrants from the German-speaking components of the Holy Roman Empire. In 1178, parts of the Duchy of Kraków around Bytom, Oświęcim, Chrzanów and Siewierz were transferred to the Silesian Piasts, yet their population was of Vistulan and not of Silesian descent.[5]

Between 1289 and 1292, Bohemian king Wenceslaus II became suzerain of some Upper Silesian duchies. It wasn't however until 1335 when Polish kings renounced their hereditary rights to Silesia.[6] The province became part of the Bohemian Crown under the Holy Roman Empire, and passed with that crown to the Habsburg Monarchy of Austria in 1526.

In the 15th century there were several border changes of the province. First of all parts of the territories that were ransfered to the Silesian Piasts in 1178, were bought by the Polish kings in the second half of the 15th century (the Duchy of Oświęcim in 1457 and the Duchy of Zator in 1494). The Bytom area however remained in the possession of the Silesian Piasts, even though it was a part of the Diocese of Kraków.[7] Secondly the Duchy of Crossen was inherited by Margraviate of Brandenburg in 1476 and, with the renunciation by King Ferdinand I and estates of Bohemia in 1538, it became an integral part of Brandenburg.

In 1742, most of Silesia was seized by King Frederick the Great of Prussia in the War of the Austrian Succession and subsequently made the Prussian Province of Silesia. Consequently, Silesia became part of the German Empire when it was proclaimed in 1871.

After World War I, Upper Silesia was contested by Germany and the newly-independent Second Polish Republic. The League of Nations organized a plebiscite to decide the issue in 1921, whose results (disputed by Poland) were skewed by the German population and therefore wished to remain part of Germany. Following the third Silesian Uprising (1921), however, the easternmost portion of Upper Silesia (including Katowice), with a majority ethnic Polish population, was awarded back to Poland, where it was formed into the Silesian Voivodeship. The Prussian Province of Silesia within Germany was then divided into the provinces of Lower Silesia and Upper Silesia. Meanwhile Austrian Silesia, the small portion of Silesia retained by Austria after the Silesian Wars, was mostly awarded to the new Czechoslovakia (becoming known as Czech Silesia), although most of Cieszyn and territory to the east of it went to Poland (see Zaolzie).

In 1945, at the end of World War II, all of the former German Silesia was occupied by the Soviet Union, and under the post-war border changes most of it eventually became part of Poland. As a result the vast majority of the ethnic German population that had been settled there for centuries was expelled by force and replaced by Polish settlers, most of whom had themselves been expropriated and forcefully expelled from the former eastern parts of Poland (Kresy) that had been occupied by the Soviet Union.

The administrative division of Silesia within Poland has changed several times since 1945. Since 1999 it has been divided between Lower Silesian Voivodeship, Opole Voivodeship, Silesian Voivodeship and Lubusz Voivodeship. Czech Silesia is now part of the Czech Republic, forming the Moravian-Silesian Region and the northern part of Olomouc Region. Germany retains the Silesian-Lusatian region (Niederschlesien-Oberlausitz or Schlesische Oberlausitz) west of the Neisse, which is part of the federal-state of Saxony. 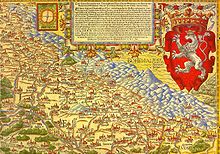 First map of Silesia by Martin Helwig, 1561; north at the bottom

Most of Silesia is relatively flat, although its southern border is generally mountainous. It is primarily located in a swath running along both banks of the upper and middle Oder (Odra) river, but it extends eastwards to the upper Vistula river. The region also includes many tributaries of the Oder, including the Bóbr (and its tributary the Kwisa), the Barycz and the Nysa Kłodzka. The Sudeten mountains run along most of the southern edge of the region, though at its south-eastern extreme it reaches the Silesian Beskids and Moravian-Silesian Beskids, which belong to the Carpathian range.

Historically, Silesia was bounded to the west by the Kwisa and Bóbr rivers, while the territory west of the Kwisa was in Upper Lusatia (earlier Milsko). However, because part of Upper Lusatia was included in the Province of Silesia in 1815, in Germany Görlitz, Niederschlesischer Oberlausitzkreis and neighbouring areas are considered parts of historical Silesia. Those districts, along with Poland's Lower Silesian Voivodeship and parts of Lubusz Voivodeship, make up the geographic region of Lower Silesia.

Silesia has undergone a similar notional extension at its eastern extreme. Historically it extended only as far as the Brynica river, which separates it from Zagłębie Dąbrowskie in the Lesser Poland region. However to many Poles today, Silesia (Śląsk) is understood to cover all of the area around Katowice, including Zagłębie. This interpretation is given official sanction in the use of the name Silesian Voivodeship (województwo śląskie) for the province covering this area. In fact the word Śląsk in Polish (when used without qualification) now commonly refers exclusively to this area (also called Górny Śląsk or Upper Silesia).

As well as the Katowice area, historical Upper Silesia also includes the Opole region (Poland's Opole Voivodeship) and Czech Silesia. Czech Silesia consists of a part of the Moravian-Silesian Region and the Jeseník District in the Olomouc Region.

Silesia is a resource-rich and populous region. Bituminous and lignite coal is abundant, and a substantial manufacturing industry is present, particularly in Upper Silesia. Lower Silesia features large copper mining and processing between the cities of Legnica, Głogów, Lubin and Polkowice. Recently, the estimate of lignite reserves near Legnica has been upgraded to about 35 billion tonnes, making them some of the largest in the world.[8]

In post-communist times, however, the outdated nature of many facilities has led to environmental problems and substantial transition away from the resource-based to service-based economy.

The region also has a thriving agricultural sector, which produces cereals (wheat, rye, barley, oats, corn), potatoes, rapeseed, sugar beets and others. Milk production is well developed. The Opole Silesia has for decades occupied the top spot in Poland for their indices of effectiveness of agricultural land use.[16]

Silesia is generally well forested. This is because greenness is generally highly desirable by the local population, particularly in the highly industrialized parts of Silesia.

Before the Second World War, Silesia was inhabited mostly by Germans and Poles, in addition to German and Polish Jews and Czechs. In 1905, a census showed that 75% of the population were Germans and 25% Poles. Most Jews were murdered in the Holocaust in the German concentration camps. The vast majority of Germans fled or were expelled from Silesia during and after World War II. Most German Silesians and their descendants live today in the territory of the Federal Republic of Germany, many of them working as miners in the Ruhr area, like their ancestors did in the Silesian mines. In order to smooth their integration into West German society after 1945, they were organized into officially recognized organisations, like the Landsmannschaft Schlesien, financed from the federal German budget[citation needed]. One of its most notable but controversial spokesmen was the CDU politician Herbert Hupka. The prevailing public opinion in Germany is that these organisations will achieve reconciliation with the Polish Silesians, which is gradually occurring[citation needed]. Many of the pre-war Germanised Slavic Silesians living in Upper Silesia have remained culturally bound to and have sought work in the Federal Republic of Germany after 1990, along with their ethnic German Silesian countrymen.

Silesia is perceived by many inhabitants as a distinct region with its own culture.[17] Also stereotyping of Silesians and by Silesians themselves is common.[18]

The following table lists the cities in Silesia with a population greater than 100,000 (2006) (with German names in italics):

* Only part in Silesia