The two main varieties of Chinese alcoholic beverages are fermented beverages (Chinese: 黃酒; pinyin: huáng jiǔ; literally "yellow liquor"), which may be clear, beige, or reddish-brown in color; and distilled beverage (Chinese: 白酒; pinyin: bái jiǔ; literally "white liquor"), which are usually clear liquids. Although not a traditional product, grape wine (Chinese: 葡萄酒; pinyin: pútáo jiǔ; literally "grape liquor") was first mentioned in classical Chinese poems around 2,000 years ago in the Han Dynasty. It has been increasingly produced and consumed in China since 1900 as a result of increased Western influences.

Chinese alcoholic beverages are traditionally warmed before being consumed. The temperature to which the liquor may be warmed ranges between approximately 35 and 55°C, well below the boiling point of ethanol. Warming the liquor allows its aromas to be better appreciated by the drinker without losing too much alcohol. Optimal temperature for warming depends on the type of beverage as well as the preference of the drinker.

Bowl and stove from the Western Han Dynasty (206-68 BCE) used to gently heat Jiu for consumption.

The origins of the alcoholic beverage from fermented grain in China cannot be traced definitively. A legend said that Yidi, the wife of the first dynasty's king Yu (about 2100 BC) invented the method. Another legend says that liquor was invented by one Dù Kāng (杜康). At that time millet was the main grain, the so-called "yellow liquor", then rice became more popular. It was not until the 19th century that distilled drinks became more popular.

Traditionally, Chinese distilled liquors are consumed together with food rather than drunk on their own. Huangjiu were also traditionally drank warm, with the practice going back to early dynastic period.

Chinese fermented beverages, called huangjiu (Chinese: 黄酒; pinyin: huáng jiǔ, lit. "yellow liquor"), are brewed directly from grains such as rice or wheat. Such liquors contain less than 20% alcohol, due to the inhibition of ethanol fermentation at this concentration. These wine are traditionally pasteurized, aged, and filtered before their final bottling for sale to consumers. Huangjiu can also be distilled to produce baijiu (see below).

Huangjiu are classified based on several factors. Among them are the liquor's dryness, the starter used in its production, and its production method.

While the primary ingredient used to produce huangjiu is rice, the main ingredient of choujiu is glutinous rice. 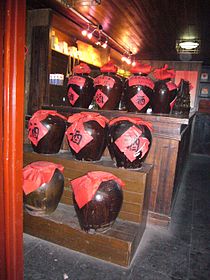 Chinese distilled beverages are classified under the general heading baijiu (Chinese: 白酒; pinyin: báijiǔ, lit. "white liquor"). White liquors are also commonly called shaojiu (烧酒; pinyin: shāojiǔ; lit. "hot liquor" or "burned liquor"), either because of the burning sensation in the mouth during consumption, the fact that they are usually warmed before being consumed, or because of the heating required for distillation. Liquors of this type typically contain more than 30% alcohol in volume since they have undergone distillation. There are a great many varieties of distilled liquors, both unflavored and flavored.

While yellow liquors have a wide variety of classification methods, white liquors are grouped primarily by their type of fragrance.

The three main ingredients that contribute to the unique characters of various Chinese alcoholic beverages are the grains, the water, and the liquor starter. Other ingredients that alter the colour or taste of the final product may also be added.

Grains used in brewing are degermed and polished of their bran. The grains are then soaked and acidfied with the aid of lactobacillus or through the addition of lactic acid into the soaking liquid. Acidification is done to discourage the growth of other microbes on the grains, which can spoil the resulting liquor by creating off flavours in it or rendering it poisonous. This process also gives many Chinese alcoholic beverages a taste and mouth-feel that is unique, and different from most other types of rice wine. 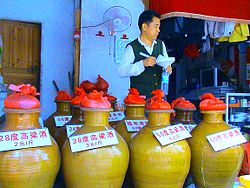 Locally-made crockery jars of baijiu in a liquor store in Haikou, Hainan, China, with signs indicating alcoholic content and price per jin (500 grams)

Emphasis is placed on gathering the cleanest water directly from springs or streams, or from the center of lakes where the water has been exposed to the least amount of pollutants. Water should be low in iron and sodium, with a higher proportion of magnesium and calcium ions as part of its total mineral content.

Also known as a "starter cake" (麴餅; pinyin: qū bǐng) or "liquor medicine" (酒藥, 酒药; pinyin: jiǔ yaò), the liquor starters for Chinese alcoholic beverages are cakes or pastes containing a complex mixture of various yeasts, molds, and bacteria, which are used to inoculate the grains. The starter converts the grain starches to sugars, and sugars to ethanol. Certain starters also acidify the grain mixture. Each brewery uses a different type of starter cake that was made at their facilities from previous starter cultures, which are handed down from generation to generation. Larger factories often use pure cultures of each organism in a starter instead of the actual cakes themselves.

There are three main types of starters:

The starter is either mixed in water using only the filtrate of the mixture, or the starter is dried, ground, and applied directly in the form of a dry powder. Although the manufacturing process requires only one type of starter for fermentation, many Chinese alcoholic beverages are brewed their liquors from two of more types of starters.

Chinese alcoholic beverages may occasionally be made or flavoured with fruits, but this is rather rare (it is more common in Korean wines). Medicinal herbs and spices are more commonly added to Chinese wine. These additives not only impart a reddish, brown, or green colour, but also modify the taste and flavour of the liquor itself. Some production processes also add a dark tan colour without the addition of herbs.

Prior to the actual brewing of the liquor, a small batch of grain is prepared to produce the seed mash (酒母; pinyin: jiǔ mǔ). Seed mash is produced by soaking and acidifying the glutinous rice as well as other grains and steaming them on frames or screens for several minutes. This cooks the grains and converts the starch to a gelatinized form that is more easily utilized by the starter culture.

The inoculation temperature of the steamed grains is tightly controlled as it alters the flavour character. This is usually done when the grain has been doused with cold water and cooled to between 23 and 28°C, which is considered the optimal initial fermentation temperature for the seed mash. The small starter is first added and allowed around two days to begin the saccharification, acidification, and fermentation of the grains. In many northern breweries, the large starter is often used instead.

Inoculation with the first starter partially liquifies the steamed grains, which is the signal to add the large starter as well as more water to form a thick slurry. This slurry is carefully stirred by a brewmaster to aerate and maintain an optimal level of oxygen and carbon dioxide in the mixture, as well as to maintain an even temperature throughout the fermenting mass. The slurry is periodically stirred over the course of a week. The stirred slurry is then allowed to go through a more thorough fermentation for approximately one month, following which the pH of the mixture will have dropped to around 3.4, and the concentration of alcohol will have reached approximately 15%. This is the seed mash that will be used to brew the main mash.

Other than for brewing liquor, the seed mash is often made by Chinese families to be eaten or drunk as a sweet dessert.

More soaked and acidified rice is prepared in the same fashion as in the seed mash, however, depending on the type of yellow liquor being produced, the rice is then either doused with cold water or spread out on a flat surface to cool down. Large factories usually employ air blowers to accomplish this. The cooling method alters the flavour and mouthfeel.

There is a wide variety of production methods. Saccharification and fermentation of the rice can occur in separate phases, similar to the way Japanese sake is produced, or a concurrent process where saccharification and fermentation happens in the same mash. The latter method is the typical process in China. In either case, the alcoholic liquid produced is then is allowed to continue to mature in earthenware jars for several months to several decades. The matured alcoholic liquid is then bottled and sold as "yellow liquor."

In traditional Chinese huangjiu production, the main mash is made by mixing the seed mash, additional large starter, and fresh water into newly cooked steamed glutinous rice that has been cooled into large glazed earthenware pots (up to 2 meters in diameter and height). The mixture is mounded on the sides of the pots and allowed to ferment. The seed mash and the starter will saccharify, ferment, and liquify the cooked rice in the main mash.

If the process where separate saccharification and fermentation occurs is desired, the seed mash is typically not used as a main mash is never actually produced. A mash of water, steamed glutinous rice, and other grains is inoculated with rice that has already been cultivated with the mold Aspergillus oryzae or molds of the Rhizopus genus and certain strains of Lactobacillus. When mixed into the mash the molds cultivate the mixture and convert the starch in the grains into sugars and lactic acid, respectively. This sweet and slightly sour liquid is drained and reserved, while additional water (and sometimes also malt) is added to the mixture. The process is repeated until the grains are exhausted.

Yeast is then added to this liquid in order to convert the sugars in the liquid to alcohol.

The production of baijiu is so similar in color and mouthfeel to vodka that some foreigners refer to it as "Chinese vodka" or "Chinese white vodka." However, unlike vodka, baijiu is generally distilled only once (as opposed to five or more times for some vodkas) and less thoroughly filtered, which gives each liquor its own unique and sometimes penetrating (or even somewhat harsh) flavour and fragrance.