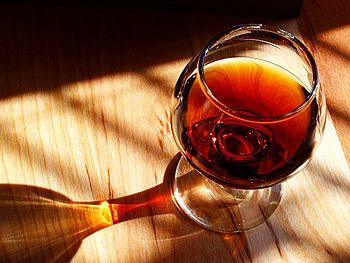 A glass of port, a fortified wine.

Fortified wine is wine to which a distilled beverage (usually brandy) has been added.[1] Fortified wine is distinguished from spirits made from wine in that spirits are produced by means of distillation, while fortified wine is simply wine that has had a spirit added to it. Many different styles of fortified wine have been developed, including port, sherry, madeira, marsala, Commandaria wine and vermouth.[2]

The original reason for fortifying wine was to preserve it, since ethanol is a natural antiseptic. Even though other preservation methods now exist, fortification continues to be used because the process can add distinct flavors to the finished product.[citation needed]

Although grape brandy is most commonly added to produce fortified wines, the additional alcohol may also be neutral spirit that has been distilled from grapes, grain, sugar beets, or sugarcane. Regional appellation laws may dictate the types of spirit that are permitted for fortification.

The source of the additional alcohol and the method of its distillation can affect the flavor of the fortified wine. If neutral spirit is used, it will usually have been produced with a continuous still, rather than a pot still.[2] 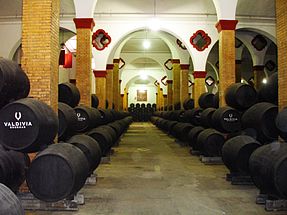 When added to wine before the fermentation process is complete, the alcohol in the distilled beverage kills the yeast and leaves residual sugar behind. The end result is a wine that is both sweeter and stronger, normally containing about 20% alcohol by volume (ABV).

During the fermentation process, yeast cells in the must continue to convert sugar into alcohol until the must reaches an alcohol level of 16%–18%. At this level, the alcohol becomes toxic to the yeast and kills it. If fermentation is allowed to run to completion, the resulting wine will (in most cases) be low in sugar and will be considered a dry wine. The earlier in the fermentation process that alcohol is added, the sweeter the resulting wine will be. For drier fortified wine styles, such as sherry, the alcohol is added shortly before or after the end of the fermentation.

In the case of some fortified wine styles (such as late harvest and botrytized wines), a naturally high level of sugar will inhibit the yeast. This causes fermentation to stop before the wine can become dry.[2]

Mistelle (Italian: mistella; French: mistelle; Spanish, Portuguese, Galician and Catalan: mistela, from Latin mixtella/mixtvm "mix") is sometimes used as an ingredient in fortified wines, particularly Vermouth, Marsala and Sherry, though it is used mainly as a base for apéritifs such as the French Pineau des Charentes.[3] It is produced by adding alcohol to non-fermented or partially fermented grape juice.[4] The addition of alcohol stops the fermentation and, as a consequence Mistelle is sweeter than fully fermented grape juice in which the sugars turn to alcohol.[5] 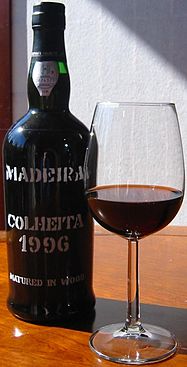 Madeira is a fortified wine made in the Madeira Islands. The wine is produced in a variety of styles ranging from dry wines which can be consumed on their own as an aperitif, to sweet wines more usually consumed with dessert.

Marsala wine is a wine from Sicily that is available in both fortified and unfortified versions.[6] It was first produced in 1772 by an English merchant, John Woodhouse, as an inexpensive substitute for sherry and port,[7] and gets its name from the island's port, Marsala.[6] The fortified version is blended with brandy to make two styles, the younger, slightly weaker Fine, which is at least 17% abv and aged at least four months; and the Superiore, which is at least 18%, and aged at least two years. The unfortified Marsala wine is aged in wooden casks for five years or more and reaches a strength of 18% by evaporation.[6]

Port wine (also known simply as Port) is a fortified wine from the Douro Valley in the northern provinces of Portugal.[8] It is typically a sweet red wine, but also comes in dry, semi-dry and white varieties. 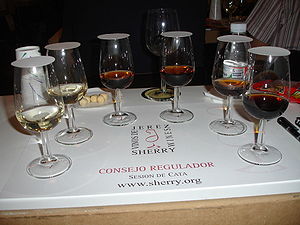 A degustation of sherries

Sherry is a fortified wine made from white grapes that are grown near the town of Jerez, Spain. The word "sherry" is an anglicization of Jerez. In earlier times, sherry was known as sack (from the Spanish saca, meaning "a removal from the solera"). In the European Union "sherry" is a protected designation of origin; therefore, all wine labeled as "sherry" must legally come from the Sherry Triangle, which is an area in the province of Cádiz between Jerez de la Frontera, Sanlúcar de Barrameda, and El Puerto de Santa María.[9]

After fermentation is complete, sherry is fortified with brandy. Because the fortification takes place after fermentation, most sherries are initially dry, with any sweetness being added later. In contrast, port wine (for example) is fortified halfway through its fermentation, which stops the process so that not all of the sugar is turned into alcohol.

Sherry is produced in a variety of styles, ranging from dry, light versions such as finos to much darker and sometimes sweeter versions known as olorosos.

Vermouth is a fortified wine flavored with aromatic herbs and spices ("aromatized" in the trade) using closely guarded recipes (trade secrets). Some of the herbs and spices used may include cardamom, cinnamon, marjoram and chamomile.[10] Some vermouth is sweetened; however, unsweetened, or dry, vermouth tends to be bitter. The person credited with the second vermouth recipe, Antonio Benedetto Carpano from Turin, Italy, chose to name his concoction "vermouth" in 1786 because he was inspired by a German wine flavoured with wormwood, a herb most famously used in distilling absinthe. However, wine flavored with wormwood goes back to ancient Rome. The modern German word Wermut (Wermuth in the spelling of Carpano's time) means both wormwood and vermouth. The herbs were originally used to mask raw flavors of cheaper wines,[11] imparting a slightly medicinal "tonic" flavour.

Vins doux naturels are lightly fortified wines typically made from white Muscat grapes or red Grenache grapes in the south of France. The production of vins doux naturels was perfected by Arnaud de Villeneuve at the University of Montpellier in the 13th century and they are now quite common in the Languedoc-Roussillon of southwest France.

As the name suggests, Muscat de Beaumes-de-Venise, Muscat de Rivesaltes, and Muscat de Frontignan are all made from the white Muscat grape, whilst Banyuls and Maury are made from red Grenache. Regardless of the grape, fermentation is stopped by the addition of up to 10% of a 190 proof (95%) grape spirit.[12] The Muscats are made in a somewhat oxidised style, the Grenaches less so.[13]

Inexpensive fortified wines, such as Thunderbird and Wild Irish Rose, became popular during the Great Depression for their relatively high alcohol content. The term wino was coined during this period to describe impoverished people who drank these wines solely for their inebriating effect.[14]

These wines continue to be associated with the homeless, mainly because marketers have been aggressive in targeting low-income communities as ideal consumers of these beverages; organizations in cities such as Los Angeles, San Francisco, Seattle, and Portland have urged makers of inexpensive fortified wine, including E & J Gallo Winery, to stop providing such products to liquor stores in impoverished areas.[15] In 2005, the Seattle City Council asked the Washington State Liquor Control Board to prohibit the sale of certain alcohol products in an impoverished "Alcohol Impact Area." Among the products sought to be banned were over two dozen beers, and six fortified wines: Cisco, Gino's Premium Blend, MD 20/20, Night Train, Thunderbird, and Wild Irish Rose.[16] The Liquor Control Board approved these restrictions on August 30, 2006.[17]

Fortified wines are often termed dessert wines in the United States to avoid association with hard drinking.[18] The term "Vins de liqueur" is used by the French.[19] Under European Union legislation, a liqueur wine is a fortified wine that contains not less than 17.5% abv (except for certain quality liqueur wines) and that meets many additional criteria.[20]