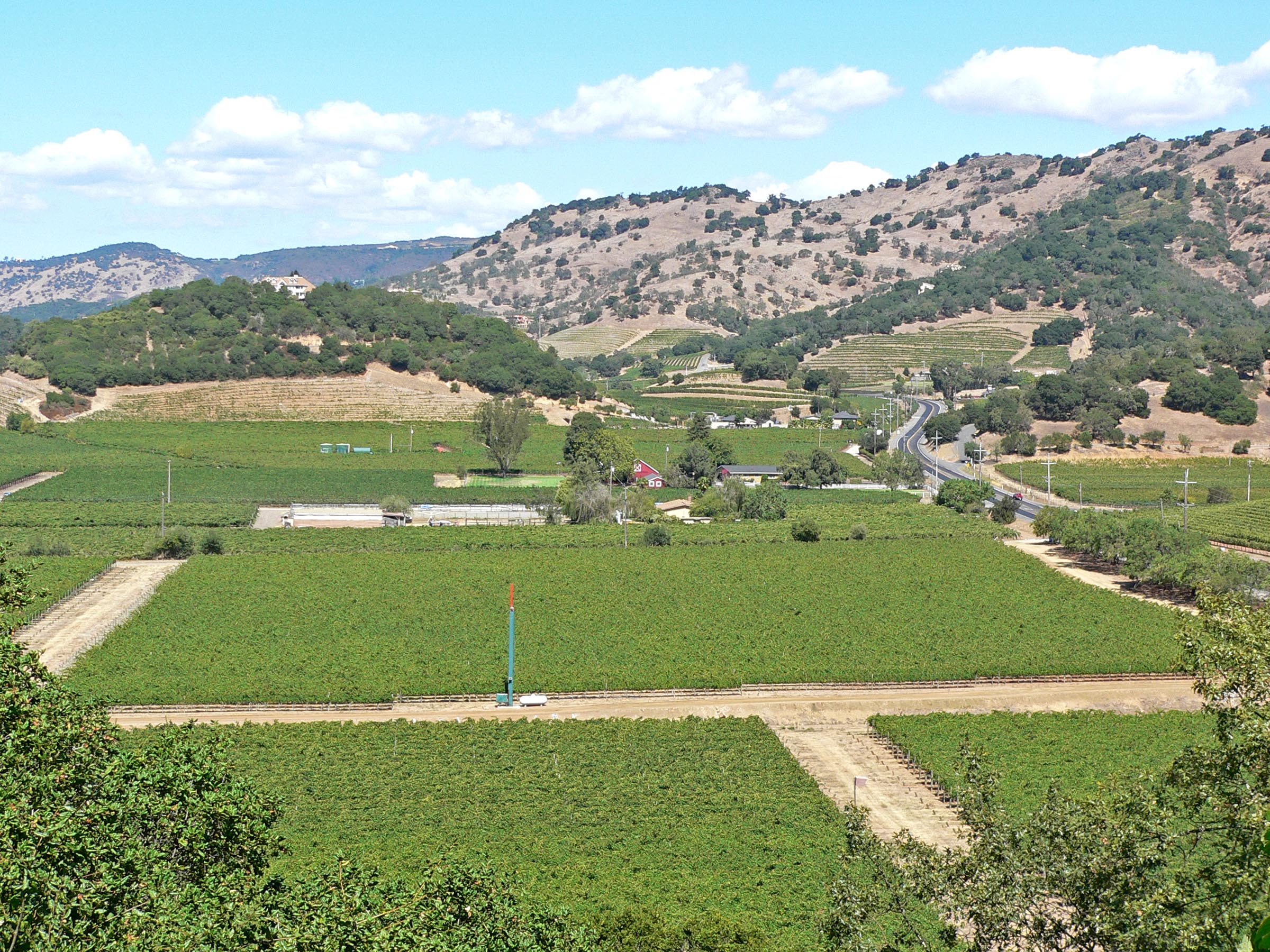 California wine is made in the of . Nearly three-quarters the size of , California accounts for nearly 90 percent of entire production. The production in California alone is one third larger than that of Australia. If California were a separate country, it would be the world's fourth-largest wine producer.

The state's viticultural history dates back to the 18th century when Spanish missionaries planted the first vineyards to produce wine for Mass.

Following a wine renaissance in the mid-20th century, Californian wine entered the international stage at the 1976 Judgment of Paris when Californian wines beat out s in both red and white wine categories. Today there are more than 1,200 wineries in the state, ranging from small boutique wineries to large corporations like with distribution across the globe.

The state of California was first introduced to "" vines in the 18th century by the Spanish, who planted vineyards with each mission they established. The wine was used for religious sacraments as well as for daily life. The vine cuttings used came from and were the descendant of the "common black grape" (as it was known) brought to the by in 1520. The grape's association with the church caused it to become known as the , which was to become the dominant grape variety in California until the 20th century.

The in the mid-19th century brought waves of new settlers to the region, increasing the population and local demand for wine. The newly growing wine industry took hold in around the counties of and Napa. During this period some of California's oldest wineries were founded including , , and . Chinese immigrants played a prominent role in the developing of the Californian wine industry during this period-building wineries, planting vineyards, digging the underground cellars and harvesting grapes. Some even assisted as s prior to the passing of the Chinese Exclusion Act which severely affected the Chinese community in favor of encouraging "white labor." By 1890, most of the Chinese were out of the wine industry.

The late 19th century also saw the advent of the epidemic which had already ravaged French and other European vineyards. Vineyards were destroyed and many smaller operations went out of business. Fortunately the remedy of resistant American was well known and the Californian wine industry was able to quickly rebound and utilized the opportunity to expand the plantings of new grape varieties. By the turn of the 20th century nearly 300 grape varieties were being grown in the state, supplying its nearly 800 wineries. Worldwide recognition seemed imminent until , when the 18th Amendment ushered in the beginning of Prohibition. Vineyards were ordered to be uprooted and cellars were destroyed. Some vineyards and wineries were able to survive by converting to or production. A few more were able to stay in operation in order to continue to provide churches sacramental wine, an allowed exception to the Prohibition laws. But most went out of business. By the time that Prohibition was repealed in 1933, only 140 wineries were still in operation.

It took time for the Californian wine industry to recover from this setback. By the 1960s, California was primarily known for its sweet port-style wines made from and grapes. However a new wave of winemakers soon emerged and helped usher in a renaissance period in California wine with a focus on new winemaking technologies and an emphasis on quality. Several well known wineries were founded in this decade including , and . As the quality of Californian wine improved, the region started to receive more international attention. A moment for the industry occurred in 1976 when British wine merchant Steven Spurrier invited several Californian wineries to participate in a event in . It was to compare the best of California with the best of Bordeaux and Burgundy. In an event known as the The Judgment of Paris, Californian wines shocked the world by sweeping the in both the red and white wine categories. Throughout the wine world, perspectives about the potential of California wines started to change. The state's wine industry continued to grow as California emerged to become one of the world's premier wine regions.

California is very geologically diverse region and is equally varied in the range of climates and "s" that can be found. Most of the state's wine regions are found between the and the Central Valley. The Pacific Oceans and large bays, like serve as tempering influences to the wine regions nearby providing cool winds and that balance the heat and sunshine. While can be a viticultural hazard, most areas of California receive sufficient amounts of rainfall with the annual rainfall of wine regions north of between 24-45 es (615-1150 mm) and the more southern regions receiving 13-20 inches. Winters are mild with little threat of damage though springtime frost can be a hazard. To curb the threat of frost, vineyard owners will often employ the use of wind machines, sprinklers and s to protect the vines.

While California's wine regions can be generally classified as having a , there are also regions with more s. Proximity to the Pacific or bays as well as unobstructed access to the cool currents that come off them will dictate the relative coolness of the wine region. Areas surrounded by barriers, like some parts of Sonoma and Napa counties will be warmer due to the lack of this cooling influence. The soil types and landforms of California vary greatly, having been influenced by the of the North American and s. In some areas the soils can be so diverse that vineyards will establish blocks of the same vine variety planted on different soils for purpose of identifying different blending components. This diversity is one of the reasons why California has so many different and distinct s.

California has over convert|427000|acre|km2 planted under vines mostly located in a stretch of land covering over convert|700|mi|km from Mendocino County to the southwestern tip of Riverside County. There are over 107 American Viticultural Areas (AVAs), including the well known Napa, Russian River Valley, Rutherford and s. The Central Valley is California's largest wine region stretching for convert|300|mi|km from the south to the . This one region produces nearly 75% of all California wine grapes and includes many of California's bulk, box and producers like Gallo, and .

Up until the late 1980s, the Californian wine industry was dominated by the Bordeaux varietals and Chardonnay. Sales began to drop as wine drinkers grew bored with the familiarity of these wines. Groups of winemakers like and a new wine wave of Italian winemakers dubbed "Cal-Ital" reinvigorated the industry with new wine styles made from different varietals like Syrah, Viognier, Sangiovese and Pinot grigio. The Santa Cruz based was one of first wineries to actively promote these more obscure grape varieties. The large variety of wine grape also encourages a large variety of wines. California produces wines made in nearly every single known wine style including sparkling, dessert and s.

While Californian winemakers increasingly craft wines in more "Old World" or European wine styles, most Californian wines (along with Australia, New Zealand, Chile and Argentina) favor simpler, more fruit dominant s. The reliably warm weather allows many wineries to use very ripe fruit which brings up a more rather than earthy or mineralic style of wine. It also creates the opportunity for higher s with many Californian wines having over 13.5%. The style of Californian Chardonnay differs greatly from wines like Chablis with Californian winemakers frequently using and oak aging to make buttery, full bodied wines. Californian Sauvignon blancs are not as herbaceous as wines from the Loire Valley or New Zealand but do have racy acidity and fresh, floral notes. Some Sauvignon blanc are given time in oak which can dramatically change the profile of the wine. Robert Mondavi first pioneered this style as a "Fume blanc" which other Californian winemakers have adopted. However, that style is not strictly defined to mean an oak wine.

The style of California Cabernet Sauvignon that first put California on the world's wine map at the Judgment of Paris is still a trademark style today. The wines are known for their concentration of fruits and structure which produces lush, rich wines that can age well. Merlot became widely planted in the 1990s due to its wide popularity, and is still the highest selling of all varietal wines in the country. Many sites that were ill suited for the grape began to produce harsh, characterless wines trying to model Cabernet. Merlot planted on better sites tend to produce a plush, concentrated style. The profile of Californian Pinot noir generally favors a more intense, fruity style than the subtler, more elegant wines of Burgundy or Oregon With the region generally being too warm for the variety, the cooler areas with more maritime influence are favored. Until being passed by Cabernet in 1998, Zinfandel was the most widely planted red wine grape in California. This was due in part to the wide popularity of . Despite being made from the same grape, the only similarity between White and Red Zinfandel is the name. Red Zinfandel is a powerful, fruity wine with high levels of acidity and a jammy type flavor. White Zinfandel is a thin, slightly sweet blush wine. While the grape does have European origins, Zinfandel is considered a unique American style grape.

California sparkling wine traces its roots to Sonoma in the 1880s with the founding of . The Korbel brothers made sparkling wine according to the "" from Riesling, , and . Today most California sparkling wine is largely made from the same grapes used in Champagne-Chardonnay, Pinot noir and some . Some wineries will also use Pinot blanc, Chenin blanc and French Colombard. The premium quality producers still use the "méthode champenoise" (or traditional method) while some low cost producers, like Gallo's Andre brand or ' Cook's, will use the .

The potential for quality sparkling wine has attracted Champagne houses to open up wineries in California. These include 's , 's Domaine Carneros and 's Roederer Estate. Despite being made with mostly the same grapes and with the same production techniques, California sparkling wines do not set out to be imitators of Champagne but rather to forge their own distinctive style. Instead of having the "biscuity", yeasty quality that distinguishes most high quality Champagnes, premium California sparkling wines show clarity of fruit flavors without being heavily "fruity". The wines strive for finesse and elegance. The optimal climate condition allows most sparkling wine producers to make a vintage dated wine every year while in Champagne this would only happen in exceptional years.

Following Prohibition, California's wine industry had a reputation for producing low quality port-style wine. Since the wine renaissance of the 1960s, the quality of California's dessert and fortified wines have been dramatically improved. was one of the first to create a wine from Sauvignon blanc and . Though unlike in Sauternes, Beringer's wine was made of grapes regularly harvested and then introduced at the winery to "Botrytis cinerea" spores created in a laboratory. Since then California winemakers in places like the have found vineyards were this can occur naturally on the grapes. The Anderson and s have also developed a reputation for their s made from Riesling. Several French and Italian style Muscat wines are produced throughout California and are known for their intense aromatics and balanced acidity. The port-style wines in California are often made from the traditional grapes like , and . Some uniquely Californian styles are also made from Zinfandel and Petite Sirah.