Furmint is a variety of wine grape from the Pontian Balcanica branch of Vitis vinifera, used for white wines. The name Furmint is taken from the word "froment" for the wheat-gold color of the wine it produces. While it is possible that it the grape is native to Hungary, the grape was likely brought to Hungary in the 13th century during the reign of King Béla IV.[1] [2] [3] It is a late variety, usually ripening in the second half of October, and is often inflicted with Botrytis.[4]

Today, Furmint is most widely grown in Hungary, particularly in the Tokaj-Hegyalja wine region where it is used to produce single-varietal dry wines as well as being the principal grape in the better known Tokaji dessert wines. It is also grown in the tiny Hungarian wine region of Somló. Furmint plays a similar role in the Slovakian wine region of Tokaj. It is also grown in Austria where it is known as Mosler. Smaller plantings are found in Slovenia where it is known as šipon. The grape is also planted in Croatia, Romania and the former republics of the Soviet Union.[5]

Furmint was likely introduced to Hungary during the reign of King Béla IV.

While the exact origins of Furmint are not clear, it is generally well established that the grape was introduced to the Austro-Hungarian area in the Middle Ages. As noted by wine expert Jancis Robinson, the grape was likely brought to Hungary in the 13th century during the reign of King Béla IV. Following the destruction of the Mongolian invasion of Hungary, Béla wanted to quickly revive the country's devastated vineyards. The king instituted several policies encouraging mass immigration of people knowledgeable in viticulture and winemaking.[1] Many of the immigrants that heeded Béla's call brought new grape varieties with them - one of which was likely Furmint.[4][2] An elaboration of this theory has the grape originating in Piedmont and being brought to Hungary during Béla's reign by Italian immigrants.[3]

In the Burgenland region (now in Austria), Furmint was historically associated with the production of the sweet dessert wine Ausbruch. The grape gradually fell out of favor in the Burgenland but in the 21st century, several Ausbruch winemakers (particularly around Rust) have been rediscovering the grape's potential in their area.[5] In Hungary, the grape is a significant component of the notable dessert wine Tokaji that has been in the Tokaj-Hegyalja region for several centuries.[4] During Communist rule of Hungary, Furmint's fortunes and notability declined as many vineyards and wineries fell into neglect. When Communism ended in the country towards the end of the 20th century, most of the joint venture wine companies that emerged decided to focus mainly on Furmint's uses in sweet wines - despite a general shift in consumers' wine tasting habits towards drier wines. It wasn't until the 21st century that more attention was given to Furmint's potential for dry wine production.[5]

In recent years, DNA profiling conducted at the University of Zagreb has shown Furmint to be likely to have a parent-offspring relationship with the lowly Gouais Blanc, which similar research elsewhere has shown to be a parent of numerous other varieties, including Chardonnay. Furmint has also been confirmed to be the same grape as the Croatian white variety Moslavac.[4] 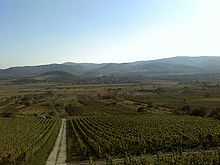 Vineyards in the Tokaj-Hegyalja region where Furmint is most widely planted.

Furmint is most widely cultivated in Hungary, particularly the Tokaj-Hegyalja region where it is often blended with Hárslevelű and Sárga Muskotály. In Somló, producers dedicated to producing dry styles of Furmint have been steadily increasing plantings. Outside Hungary, it is found planted around the Crimea where producers have endeavored to make their own versions of Tokaji. For the same reason, small plantings of the grape have been done in South Africa.[4] In Austria it is most commonly found in Burgenland (where is known as Zapfner)) and Styria (where it is known as Mosler).[5] 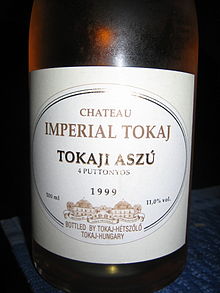 Furmint is most widely known for being a primary component of Tokaji wine.

Furmint can be produced in a variety of styles ranging from bone dry to extremely sweet wines afflicted by noble rot. The grape has the potential to produce wines with naturally high levels of acidity with complex flavors derived from phenolic compounds in the juice and through brief contact with the grape skins. Furmint wines, particularly the botrytized dessert wines, can have immense aging potential with some well made examples from favorable vintages continuing to age for over a century. These wines, described by wine expert Oz Clarke as nearly "immortal", are most often the aszú style wines of Tokaji made from the top 10-15% of Furmint harvested.[5] This potential comes from the balance of acidity and high levels of sugars in the wine which act as preservatives during the aging process.[4]

Confusion with other grapes

Furmint shares a wide range of synonyms with several other European grape varieties - such as Sauvignon vert which was once known under the synonym of Tocai Friulano even though the grape the grape was likely never used in the production of Tokaji. To confuse things further, not only does Furmint share several synonyms with Sauvignon vert but Sauvignon vert itself is a synonym for the "green berry" sub-variety of Furmint. This, coupled with physical similarities between several strains of white grapevines makes identification of different wines, particularly those in developing Eastern European countries difficult. Among the grapes that ampelographers question whether they are the same grapes or different varieties are the Croatian grape Pošip and the Romanian grape Grasă de Cotnari.[5]