Chelsea is a neighborhood on the West Side of the borough of Manhattan in New York City. The district's boundaries are roughly 14th Street to the south, 30th Street to the north, the western boundary of the Ladies' Mile Historic District – which lies between the Avenue of the Americas (Sixth Avenue) and Seventh Avenue – to the east, and the Hudson River and West Street to the west. To the north of Chelsea is the neighborhood of Hell's Kitchen, also known as "Clinton," to the northeast is the Garment District, to the east are NoMad and the Flatiron District, to the southwest is the Meatpacking District and to the southeast is the West Village.[3]

Chelsea is divided between Manhattan Community Board 4 and Manhattan Community Board 5. It contains the Chelsea Historic District and its extension, which were designated by the New York City Landmarks Preservation Commission in 1970 and 1981, respectively,[4] and added to the National Register of Historic Places in 1977, expanded in 1982 to include contiguous blocks containing particularly significant examples of period architecture.

The neighborhood is primarily residential, with a mix of tenements, apartment blocks, city housing projects, townhouses and renovated rowhouses, and its many retail businesses reflect the ethnic and social diversity of the population. The western part of Chelsea has become a center of the New York art world, with many art galleries located in both new buildings and rehabilitated warehouses. 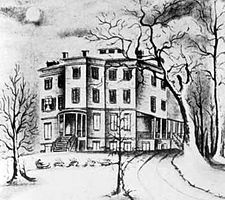 "Chelsea", drawn by a daughter of Clement Clarke Moore

Chelsea takes its name from the estate and Georgian-style house of retired British Major Thomas Clarke, who obtained the property when he bought the farm of Jacob Somerindyck on August 16, 1750. The land was bounded by what would become 21st and 24th Streets, from the Hudson River to Eighth Avenue.[5] Clarke chose the name "Chelsea" after the manor of Chelsea, London, home to Sir Thomas More. Clarke passed the estate on to his daughter, Charity, who, with her husband Benjamin Moore, added land on the south of the estate, extending it to 19th Street.[5] The house was the birthplace of their son, Clement Clarke Moore, who in turn inherited the property. Moore is generally credited with writing "A Visit From St. Nicholas" and was the author of the first Greek and Hebrew lexicons printed in the United States.

In 1827, Moore gave the land of his apple orchard to the Episcopal Diocese of New York for the General Theological Seminary, which built its brownstone Gothic, tree-shaded campus south of the manor house. Despite his objections to the Commissioner's Plan of 1811, which ran the new Ninth Avenue through the middle of his estate, Moore began the development of Chelsea with the help of James N. Wells, dividing it up into lots along Ninth Avenue and selling them to well-heeled New Yorkers.[6] Covenants in the deeds of sale specified what could be built on the land – stables, manufacturing and commercial uses were forbidden – as well as architectural details of the buildings.[5] 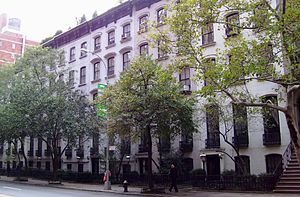 The new neighborhood thrived for three decades, with many single family homes and rowhouses, in the process expanding past the original boundaries of Clarke's estate, but an industrial zone also began to develop along the Hudson.[5] In 1847 the Hudson River Railroad laid its freight tracks up a right-of-way between Tenth and Eleventh Avenues, separating Chelsea from the Hudson River waterfront. The industrialization of western Chelsea followed, and brought immigrant populations from many countries to work in the factories,[7] including a large number of Irish immigrants, who dominated work on the Hudson River piers that lined the nearby waterfront and the truck terminals integrated with the freight railroad spur.[8] As well as the piers, warehouses and factories, the industrial area west of Tenth Avenue also included lumberyards and breweries, and tenements built to house the workers. With the immigrant population came the political domination of the neighborhood by the Tammany Hall machine,[7] as well as festering ethnic tensions: around 67 people died in a riot between Irish Catholics and Irish Protestants on July 12, 1871, which took place around 24th Street and Eighth Avenue.[5][9] The social problems of the area's workers provoked John Lovejoy Elliot to form the Hudson Guild in 1897, one of the first settlement houses – private organizations designed to provide social services. 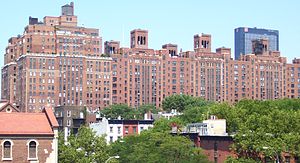 Part of the 23rd Street facade of the London Terrace apartment complex, as seen from the High Line at 20th Street. The complex takes up the full block between Ninth and Tenth Avenues and 23rd and 24th Streets.

A theatre district formed in the area by 1869,[5] and soon West 23rd Street was the center of American theater, led by Pike's Opera House (1868, demolished 1960), on the northwest corner of Eighth Avenue. Chelsea was an early center for the motion picture industry before World War I. Some of Mary Pickford's first pictures were made on the top floors of an armory building at 221 West 26th Street, while other studios were located on 23rd and 21st Streets.[7]

London Terrace was one of the world's largest apartment blocks when it opened in 1930, with a swimming pool, solarium, gymnasium, and doormen dressed as London bobbies. Other major housing complexes in the Chelsea area are Penn South, a 1962 Mitchell-Lama cooperative housing development sponsored by the International Ladies Garment Workers' Union, and the New York City Housing Authority-built and -operated Fulton Houses and Chelsea-Elliot Houses. 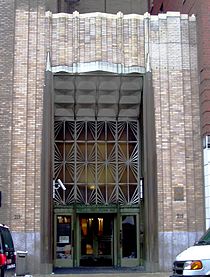 The massive 19-story Art Deco Verizon building, which spans the block between 17th and 18th Streets just off of Seventh Avenue, was built in the early 1930s. It typifies the real estate activity of the district in that in 2011 it is under consideration for conversion to condos.

The retail stores of Chelsea reflect the ethnic and social diversity of the area's population. Ethnic restaurants, delis and clothing boutiques are plentiful. Tekserve, a vast Apple computer repair shop, serves nearby Silicon Alley and the area's large creative community. The Chelsea Lofts district – the former fur and flower district – is located roughly between Sixth and Seventh Avenues from 23rd to 30th streets. Chelsea has a large gay population, stereotyped as gym-toned "Chelsea boys."

Most recently, Chelsea has become an alternative shopping destination with Barneys CO-OP - which replaced the much larger original Barneys flagship store - Comme des Garçons, and Balenciaga boutiques, as well as being near Alexander McQueen, Stella McCartney, Christian Louboutin. Chelsea Market, on the ground floor of the former Nabisco Building, is a destination for food lovers.

As New York's visual arts community moved from SoHo to West Chelsea in the 1990s, the area bounded by 10th and 11th Avenues and 18th St. and 28th St. has become one of the global centers of contemporary art. The West Chelsea Arts District is home to over 370 art galleries and innumerable artist studios. 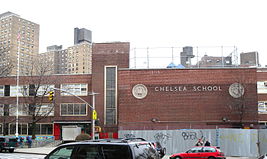 There are numerous public schools in Chelsea, including Public School 11 – also known as the William T. Harris School, Public School 33 – the Chelsea School, Intermediate School 70 – also known as the O'Henry School, Liberty High School For Newcomers, Lab School, and the Humanities Educational Complex, which contains a number of small schools and academies. Private secondary schools in the neighborhood include the Catholic Xavier High School.

Chelsea is also home to the Fashion Institute of Technology, a specialized SUNY unit that serves as a training ground for the city's fashion and design industries. The School of Visual Arts, an independent college and the public High School of Fashion Industries also have a presence in the design fields.

The neighborhood is also home to the General Theological Seminary of the Episcopal Church, the oldest seminary in the Anglican Communion. The Center for Jewish History, a consortium of several national research organizations, is a unified library, exhibition, conference, lecture, and performance venue, located on 17th Street between Fifth and Sixth Avenues.

People of many different cultures live in Chelsea. Above 23rd Street, by the Hudson River, the neighborhood is post-industrial, featuring the newly-hip High Line that follows the river all through Chelsea.[11][12] Eighth Avenue is a center for LGBT-oriented shopping and dining, and from 20th to 22nd Streets between Ninth and Tenth Avenues, mid-nineteenth-century brick and brownstone townhouses are still occupied, a few even restored to single family use.[13] 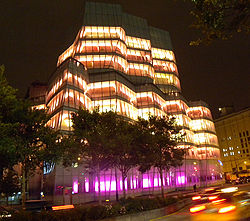 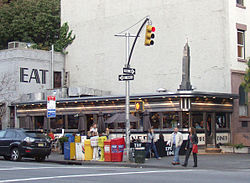 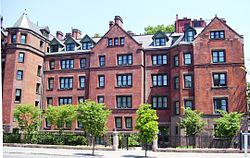 The Desmond Tutu Center of the General Theological Seminary 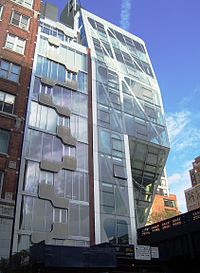 The conversion of the High Line (seen on the right) to an elevated urban park has stimulated much real estate development in West Chelsea, such as these two luxury apartment buildings, "Highline 519" and "HL23" on 23rd Street

Since the mid-1990s, Chelsea has become a center of the New York art world, as art galleries moved there from SoHo. From 16th Street to 27th Street, between 10th and 11th Avenues, there are more than 350 art galleries that are home to modern art from upcoming artists and respected artists as well.[14] Along with the art galleries, Chelsea is home to the Rubin Museum of Art - with a focus on Himalayan art, the Chelsea Art Museum, the Graffiti Research Lab and the Dance Theater Workshop - a performance space and support organization for dance companies. The community, in fact, is home to many highly regarded performance venues, among them the Joyce Theater - one of the city's premier modern dance emporiums and The Kitchen - a center for cutting-edge theatrical and visual arts.

With a change in zoning resolution in conjunction with the development of the High Line, Chelsea has experienced a new construction boom, with projects by notable architects such as Shigeru Ban, Neil Denari, Jean Nouvel, and Frank Gehry.

The Chelsea neighborhood is served by two weekly newspapers, the Chelsea-Clinton News and Chelsea Now. 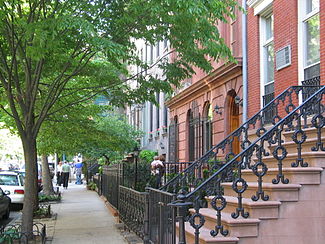