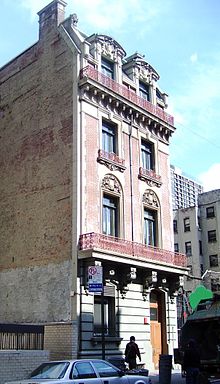 Murray Hill is a Midtown Manhattan neighborhood in New York City, USA. Around 1987 many real estate promoters of the neighborhood and newer residents described the boundaries as within East 34th Street, East 42nd Street, Madison Avenue, and the East River; in 1999, Frank P. Vardy, the demographer for the City Planning Commission, said that the traditional boundary is within East 34th Street, East 40th Street, Madison Avenue, and Third Avenue. The neighborhood is part of Manhattan Community Board 6.[1]

South of Murray Hill, blocks on Lexington Avenue around 28th Street are sometimes informally called “Curry Hill,” due to the current high concentration of Indian restaurants and specialized grocery stores.[2]

Murray Hill derives its name from the Murray family, 18th-century Quaker merchants mainly concerned with shipping and overseas trade. Robert Murray (1721–1786), the family patriarch, was born in County Armagh, Ireland, immigrated to Pennsylvania in 1732, and came to New York in 1753 after a short residence in North Carolina. He quickly established himself as a merchant and eventually owned more shipping tonnage than any other New Yorker. About 1762 Murray rented land from the city for a great house and farm. His great house, which he named Inclenberg (or Belmont), but which was popularly termed Murray Hill, was built on a since-leveled hill at what is today Park Avenue and 36th Street. The great square house was approached by an avenue of mixed trees leading from the Boston Post Road;[3] it was surrounded on three sides with verandas— or “piazzas” as they were called in New York— and commanded views of the East River over Kips Bay. The total area was just over 29 acres (117,000 m²). In today’s terms, the farm began a few feet (meters) south of 33rd Street and extended north to the middle of the block between 38th and 39th Streets. At the southern end, the plot was rather narrow, but at the northern end it extended from approximately Lexington Avenue to a spot between Madison and Fifth Avenues.[4]

The Inclenberg was an abrupt, steep-sided mound of glacial till typical of Manhattan Island's still-unmodified post-glacial terrain: this "hill of the rudest and most heterogeneous mixture of stone and gravel and boulders, cemented together into a matrix of almost impenetrable density existed, crowning the underlying schist... It had a natural rise from 34th Street, sinking towards 42nd Street and reaching from Lexington Avenue to Broadway."[5] Such a soil would have been unpromising had Murray intended seriously to farm it; instead the house, like the other grand expressions of preeminent urban social position that crowned most of Manhattan's prominent rises of ground[6] had other uses: "although some of these estates grew crops for profit," the historians of New York Edwin G. Burrows and Mike Wallace observe,[7] "their primary purpose— besides providing refuge from epidemics— was to serve as theaters of refinement".

The most illustrious member of the family was the oldest child, Lindley Murray (1745–1826). A New York lawyer, he was forced into exile after the Revolution as a loyalist. In England, Lindley wrote 11 school textbooks which had their greatest success in the new United States, partly because no international copyright existed and the books could be reprinted without royalties. Some 16 million copies of Murray's books were sold in America. His English Reader utterly dominated the American market for readers from 1815 into the 1840s. 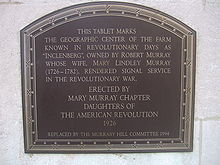 DAR plaque on 37th Street at Park Avenue in Manhattan

Mary Lindley Murray is credited with delaying William Howe and his army during General Washington's retreat from New York following the British landing at Kip's Bay, 15 September 1776. As the story goes, Mrs. Robert Murray, the mother of Lindley and John, invited the officers to tea[8] at her mansion of Inclenberg and, through feminine wiles, succeeded in delaying the British troops for a period sufficient to allow a successful American retreat.[1][9] She is said by Rev. T. Dewitt Talmage to have saved American independence by detaining Lord Howe long enough to permit Israel Putnam to pass up the Greenwich road from the city and join the forces of George Washington in the north end of the island, before Howe was able to overtake him. This detention and the stories told by the fair friend saved 4,000 men, who otherwise would have been cut off and captured.

James Thacher, M.D., a gossipy surgeon with the Continental Army, kept a journal that is one of the prime sources of information about the military happenings of the times. In an entry for Sept. 20, Thacher tells the story as follows: "The British generals...repaired to the house of a Mr. Robert Murray, a Quaker and friend of our cause; Mrs. Murray treated them with cake and wine, and they were induced to tarry two hours or more, Governor Tryon frequently joking her about her American friends. By this happy incident general Putnam, by continuing his march, escaped...It has since become almost a common saying among our officers, that Mrs. Murray saved this part of the American army."

During the 19th century, this neighborhood was "uptown" with the city ending with the reservoir at Fifth Avenue and 42nd Street covering what today is the New York Public Library and Bryant Park. To the north was for the most part farmland. In the bitter winter of 1808 during the embargo that closed New York harbor, an innovative work relief program kept out-of-work dock workers busy reducing the height of Murray Hill;[10] between twenty and forty feet were sliced off its summit and used for fill.[11] In 1833 the railroad cut was begun, to carry the New York and Harlem Rail Road through Murray Hill; the route under the most prominent obstacle in its right-of-way was opened 1 May 1834;[12] then the locomotives, which had met the horse-cars that ran through the city's streets at the station at 27th Street, could pass the reduced hill; by an act of 1850 the city pemitted to roof over the cut for the passage of steam locomotives. This Park Avenue Tunnel, enlarged and relined, has been devoted to automobile traffic since 1937.[13]

In mid-century the rich, temporarily, and the upper middle class more permanently filled the brownstone row houses that filled Murray Hill's streets, the Brick Presbyterian Church followed its congregation; selling its site facing City Hall Park, it rebuilt in 1857 closer to its congregation, on the smoothed brow of Murray Hill, at Fifth Avenue and 37th Street.[14] But when J. P. Morgan built his conservative brownstone free-standing mansion in 1882 on Madison Avenue at 36th Street, which is today a part of The Morgan Library & Museum, it was considered a fashionable but slightly old-fashioned address,[15] as the rich were filling Fifth Avenue with palaces as far as Central Park. Instead stylish merchandising was changing the neighborhood; Madison Square Park, at this time considered a part of Murray Hill, was bordered by the fashionable ladies' shops of the day on Fifth Avenue.

For much of the 20th century, the neighborhood was a quiet and rather formal place, with many wealthy older residents. Since the late 1990s, many upper-class young professionals in their twenties and thirties have begun to move into the area.[16] On weekends, the raucous restaurant-and-bar scene along Third Avenue, beyond the traditional eastern limits of Murray Hill, particularly reflects this change.

The community is also home to the CUNY Graduate Center which share the landmark former B. Altman Building with the New York Public Library Science, Industry and Business Library or SIBL and Oxford University Press. The neighborhood is also home to Stern College for Women of Yeshiva University, The Morgan Library & Museum and Scandinavia House - The Nordic Center in America, The Mexican Cultural Institute of New York and a historically notable private institution, the Union League Club of New York. On January 29, 2008, the Whitney Museum of American Art branch gallery at what had been the Philip Morris headquarters opposite Grand Central Terminal closed after a 25-year run. For around fifty years the neighborhood has been home to National Review, the conservative journal of opinion founded by William F. Buckley, Jr., most of that time at 150 East 35th Street, currently at 215 Lexington Avenue at 33rd Street. 150 East 35th Street was purchased by Yeshiva University. 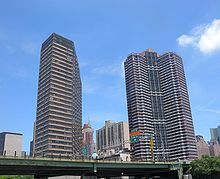 In the late 1990s, Murray Hill began to attract an influx of young college graduates, leading to a "work-hard, play-hard" atmosphere, which has since been referenced in several media sources such as The New York Times[16] and New York Post.

Though housing in the neighborhood is slightly cheaper than in fashionable nearby parts of Manhattan, prices for apartments here rose a great deal during the boom of the late 1990s and early 2000s—as much as 500 percent in a decade.

In 1975 American Airlines was headquartered at 633 Third Avenue.[21] In 1978 American announced that it would move its headquarters to a site at Dallas/Fort Worth International Airport in 1979. The move affected up to 1,300 jobs. Mayor of New York City Ed Koch described this move as "betrayal" of New York City.[22]

Due to the proximity of United Nations Headquarters and the availablility of old mansions, many countries operate embassies and consulates in Murray Hill including:

Missions to the United Nations in Murray Hill include:[25] 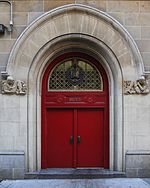 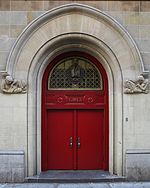 For the most part of the 20th century the name "Murray Hill" was used by New York Telephone as a telephone exchange for residents living on the East Side of Manhattan. Most neighborhoods at the time would be grouped together by a particular exchange name. Other municipalities in the United States would also use MUrray or MUrray Hill as an exchange name. The first two letters in MUrray (capitalized to indicate that they should be dialed) would be joined by five number digits to make up a telephone number such as MUrray Hill 5-9975 (the Ricardos' number on I Love Lucy). This was the way most telephone numbers were given until AT&T switched to All-Number Calling by the late 1970s to early 1980s. Nevertheless the name MUrray Hill is still applicable, as many numbers on the East Side of Manhattan still begin with 6 and 8 which correspond to MU on the telephone keypad.