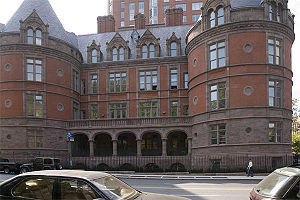 Manhattan Valley is a neighborhood on the Upper West Side of Manhattan in New York City, bounded by West 110th Street to the north, Central Park West to the east, West 96th Street to the south, and Broadway to the west. It was formerly known as the Bloomingdale District, a name still in occasional use.

Manhattan Valley occupies a natural depression running east-west across Manhattan, declining rapidly from high rocky bluffs at the western border of modern Central Park, and following west the valley created by what was once a minor stream draining from roughly the area of the Harlem Meer into the Hudson River.[2]

Some sources consider the southern boundary of Manhattan Valley to be West 100th Street, but a more natural division preferred by community groups extends the area south to West 96th Street,[3] a major thoroughfare which runs in its own natural valley and stretches across town through Central Park.

Broadway and Central Park West are busy north/south thoroughfares through the neighborhood. Others include, west to east, Amsterdam Avenue, Columbus Avenue, and Manhattan Avenue. The former two extend through the entirety of the Upper West Side (and beyond). The last originates at 100th Street and proceeds north into Harlem.

Several large swaths of Manhattan Valley on the west side are made up of residential developments which break the regular city street grid. The area from West 100th to 97th Street between Central Park West and Amsterdam Avenue consists of an extended Title I "towers in a park" housing development. Another superblock, occupied by the Frederick Douglass Houses lies just to the north, bordered by Amsterdam Avenue, West 100th Street, Manhattan Avenue, and West 104th Street. Columbus Avenue also passes through both of these developments. All other streets in the neighborhood proceed in an uninterrupted grid. 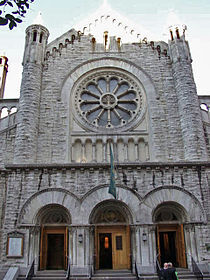 Church of The Ascension, 107th between Amsterdam & Broadway. Built by German immigrants in late 19th century; Schooled the children of Irish immigrants for 70 years; now host to a vibrant Hispanic Community.

Manhattan Valley was originally part of the Bloomingdale District of Manhattan. Early development in the 1870s and 1880s focused on institutional care for the ill or aged, and included the Hebrew Home for the Aged, the Catholic Old Age Home and the Home for Respectable Aged Indigent Females, as well as the Towers Nursing Home constructed as a cancer ward by John Jacob Astor III in 1884.[4] These, together with the Lion Brewery, gave the area its earliest landmarks.

The neighborhood began to fill out residentially at the end of the 19th century and beginning of the 20th, when first the IRT Ninth Avenue Line in 1870 and then the IRT Broadway – Seventh Avenue Line in 1904 allowed the public ready access to uptown Manhattan. Columbia's purchase of the Bloomingdale Lunatic Asylum at around the same time as the Broadway line's arrival naturally made the neighborhood more attractive as well.[2]

The area was populated mostly by Irish and German immigrants in the 1930s through 1950s. Young boys and girls took advantage of Central Park and Riverside Drive or played stick ball and roller hockey in the streets. The 1950s saw many immigrants from Puerto Rico take up residence in the Upper West Side and a proposed project to eliminate the older brownstone apartments began to drive earlier residents to the suburbs.[citation needed]

The area went into decline in the 1950s and 1960s, mirroring a general urban deterioration in Manhattan. The acute problems in Manhattan Valley began then as well, when several city blocks were demolished under Robert Moses's urban renewal programs to construct the Frederick Douglass Houses in the superblock where they stand today. Rampant graft and corruption associated with the project, however, blighted their opening and brought ill repute on the neighborhood, and the debacle contributed strongly to Moses's fall from power and ouster. Two decades of general malaise settled over progress in the neighborhood.

With the Wall Street boom in the early 1980s, Manhattan as a whole experienced a sharp recovery. Seventy years after the Bloomingdale Asylum's closing, the provenance of the name was fading into obscurity, and residents and brokers alike began referring to the neighborhood by its present name.[5] The new name and recovery were both much bolstered by the foundation in 1968 of the non-profit Manhattan Valley Development Corporation. It sought to differentiate itself from other community development organizations by opposing the demolition of pre-war buildings in favor of renovation, and seeking to promote small business and "prevent harassment by out-side management companies prevalent in low income 'minority' neighborhoods."[6]

Wavering property prices in the late 1980s and early 1990s, combined with the rise of crack use and dealers in the area, brought a halt to new investment, and the nightlife in the area stagnated in the face of crime; Manhattan Valley earned a reputation as one of the easiest places in the city to score a hit.[7] 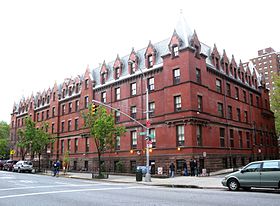 Manhattan Valley has gentrified significantly since the 1980s, along with the rest of the Upper West Side and Harlem, under steady encroachment north from the "traditional" Upper West Side and south from Morningside Heights.[8] Coinciding with this transition, the Columbus Amsterdam Business Improvement District organized in the late 1990s to develop stronger business presence along the main thoroughfares of Columbus and Amsterdam, and to provide entrepreneurial opportunities to locals.

While Broadway still provides most retail shopping opportunities, Amsterdam Avenue has emerged as a major contender in local nightlife with a glut of six bars in the two blocks from West 110th Street to 108th Street. These join the Ding-Dong Lounge on Columbus. The renaissance has much to do with increased migration of Columbia and Barnard College students south as Morningside Heights venues become increasingly expensive.

Brokers report the properties in the area remain up to thirty percent less expensive than comparable Upper West Side neighborhoods.[9] The neighborhood's proximity to the much-valued Central Park as well as to three separate subway lines make it attractive to young commuters, and as of 2006 prices were rising dramatically as New Yorkers were "tipped off" by their brokers.[8] Many historical brownstones and townhouses were saved by the Manhattan Valley Development Corporation (MVDC) from demolition, particularly east of Columbus Avenue, where the property values are the highest. Yet the area remains heavily diverse, representing a microcosm of the larger city in terms of the different ethnicities, ages and socioeconomic groups living within the same community.[10] 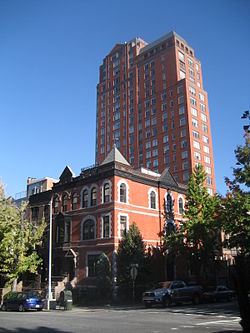