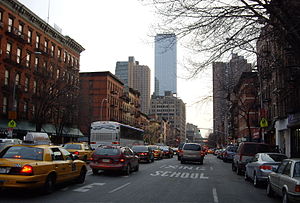 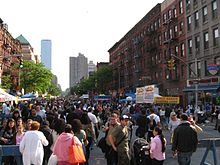 Ninth Avenue / Columbus Avenue is a southbound thoroughfare on the West Side of Manhattan in New York City. Traffic runs downtown (southbound) along its full length. In 2008 the portion between 31st and 14th Streets was remodeled with a bicycle lane between the eastern curb and the parking lane.

Ninth Avenue originates just south of West 14th Street at Gansevoort Street in the West Village, and extends uptown for 45 blocks until its intersection with West 59th Street, where it is re-signed as Columbus Avenue—named after Christopher Columbus. It continues without interruption through the Upper West Side to West 110th Street, where it is re-signed once more, as Morningside Drive, and runs north through Morningside Heights to 122nd Street.

Ninth Avenue reappears as two short avenues between 201st and 208th Streets, and then between 215th to 225th Streets.

Above the ill-defined Lincoln Square, where ABC television network houses its corporate headquarters in a group of rehabilitated and modern buildings, where Columbus Avenue passes through the Central Park West Historic District, stretching from 67-68 Streets to 89th Street, the avenue presents a unified streetscape of 5 to 7 storey tenement buildings of brick and brownstone with discreet Romanesque and Italianate details, employing cast terracotta details and panels and courses of angle-laid brickwork. Many ornate tin cornices remain. The buildings are separated in mid-block by the narrowest of access alleys, giving glimpses of Ailanthus foliage in the side-street yards. The repeated designs of three or four commercial speculative builders, using the same features and detailing, add to the avenue's architectural unity. There are several generously-scaled pre-World War I apartment buildings and the former Endicott Hotel, as well as a small commercial block from the office of McKim, Mead, and White at 72nd Street.

Former president Bill Clinton initiated a project to revitalize the 9th Avenue corridor centered around the Hell's Kitchen area. (Source: http://www.9thavenuerenaissance.com/). Several street fairs are held every year, including the Ninth Avenue Food Festival [1] in May.

The Ninth Avenue Elevated was a passenger train that ran above Ninth Avenue beginning in the nineteenth century. The lease for the line was assumed by the Interborough Rapid Transit Company (IRT) on April 1, 1903.[1] The line ran until it was closed and dismantled in 1940 following the purchase of the IRT by the City of New York.