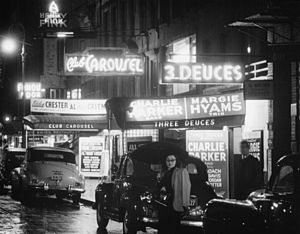 The blocks of 52nd Street between Fifth Avenue and Seventh Avenue were renowned in the mid-20th century for the abundance of jazz clubs and lively street life. The street was convenient to musicians playing on Broadway and the 'legitimate' nightclubs and was also the site of a CBS studio. Musicians who played for others in the early evening played for themselves on 52nd Street.

In its heyday from 1930 through the early 1950s, 52nd Street clubs hosted such jazz legends as Miles Davis, Harry Gibson, Dizzy Gillespie, Billie Holiday, Nat Jaffe, Marian McPartland, Thelonious Monk, Charlie Parker, Louis Prima, Art Tatum, Fats Waller, and many more. Although musicians from all schools performed there, after Minton's Playhouse in uptown Harlem, 52nd Street was the second most important place for the dissemination of bebop;[1]. In fact, a tune called "52nd Street Theme" by Thelonious Monk became a bebop anthem and jazz standard.

Virtually every great jazz player and singer of the era performed at clubs such as Downbeat, The Famous Door, Jimmy Ryan's, The Onyx, Three Deuces, and the Yacht Club. Noted jazz disc jockey Symphony Sid frequently did live broadcasts from the street, making it famous across the country.

By the late 1940s the jazz scene began moving elsewhere around the city and urban renewal took hold of the street. By the 1960s, most of the legendary clubs were razed or fell into disrepair. The last club there closed its doors in 1968. Today, the street is full of banks, shops, and department stores and shows little trace of its jazz history. The block from 5th to 6th Avenues is formally co-named "Swing Street" and one block west is called "W. C. Handys Place". 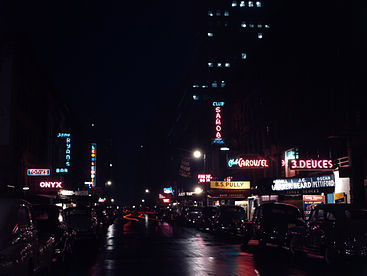 The section between Eleventh and Tenth Avenues is signed "Joe Hovarth Way" in tribute to Joseph Hovarth (1945–1995) who located the Police Athletic League William J. Duncan Center on the block after moving from its original location.[2] The Duncan Center is named for a patrolman who was shot while chasing a stolen car in the neighborhood on May 17, 1930.[3] 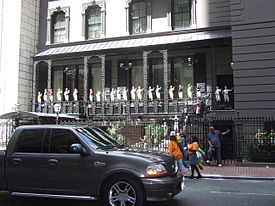 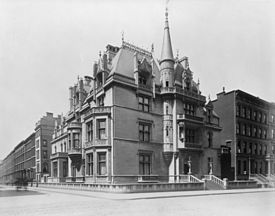 The William Kissam Vanderbilt mansion "Petit Château", designed by Richard Morris Hunt, stood on the corner of Fifth Avenue and 52nd Street until 1926 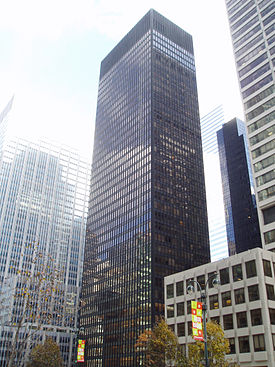 The Seagram Building was completed in 1957 and was designed by Ludwig Mies van der Rohe, in collaboration with Philip Johnson

Avenue of the Americas