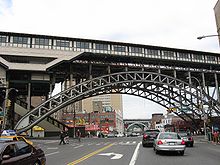 West 125th looking from Broadway to the Hudson River

125th Street is a two-way street that runs east-west in the New York City borough of Manhattan, considered the "Main Street" of Harlem; It is also called Martin Luther King, Jr. Boulevard. 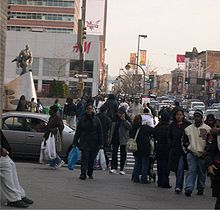 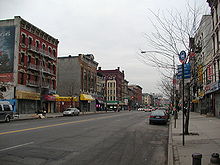 The western part of the street runs diagonally between the neighborhoods of Manhattanville and Morningside Heights from the north-west from an interchange with the Henry Hudson Parkway at 130th Street. East of Morningside Avenue it runs east-west through central Harlem to an interchange with F.D.R. Drive by the East River, where it becomes the Manhattan leg of the RFK-Triborough Bridge. Many sections of the street have been gentrified and developed with such stores as MAC Cosmetics, Old Navy, H&M, CVS/pharmacy, and Magic Johnson Theaters. The historic Apollo Theater is here. In collaboration with the community, the city has developed a plan for the 125th Street corridor focusing on reinforcing and building upon its strengths as an arts and cultural corridor.[1]

A proposal to convert the street into a Trans-Harlem Expressway died when funds were diverted from the proposed 125th Street Hudson River bridge.

A rift in the crust runs along underneath this street and is known as the 125th Street Fault. The fault line creates a fault valley deep enough to require the IRT Broadway – Seventh Avenue Line to become a trestle bridge between 122nd and 135th Streets. The street in the 18th century was called The Hollow Way. 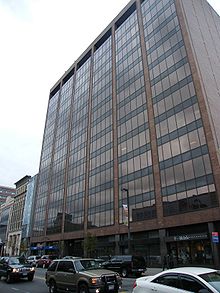 55 West 125th where Bill Clinton has his office