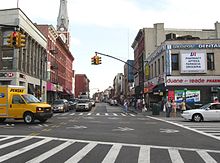 Manhattan Avenue is the name of two streets in New York City.

Manhattan Avenue is a north-south thoroughfare in the Brooklyn neighborhoods of Greenpoint and Williamsburg. It is the major shopping street in Greenpoint while it is mostly residential in Williamsburg. The stretch through Greenpoint is also called Little Poland for its high concentration of Polish culture and of Polish-named businesses and signage. The northern end was formerly connected to Long Island City, Queens by the Vernon Boulevard Bridge across Newtown Creek and the southern end is at Broadway. The southern part of the avenue is one way north bound while the portion in Greenpoint is two-way. The IND Crosstown Line subway runs under Manhattan Avenue north of McCarren Park. 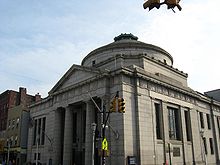 Prior to the consolidation of Williamsburg and Greenpoint into the city of Brooklyn in 1855, what is now Manhattan Ave. existed in two unconnected segments. The segment in Williamsburg was called Ewen Street (signs can still be seen in the masonry of some buildings) and the segment in Greenpoint was named Orchard Street below Greenpoint Avenue and Union Ave above[1]. These were connected near McCarren Park and renamed Manhattan Ave. This was just one of several street name changes made in an attempt to better integrate the street systems of the different cities and towns after the merger.

Not included in the original Commissioners' Plan of 1811, Manhattan Avenue in Manhattan Valley saw its first buildings in 1885, a group of row houses on its western side. These buildings were brick with stone and terra-cotta trim.[2] The now defunct New York Cancer Hospital, a landmark since 1976[3] is nearby on Central Park West.

A Manhattan Avenue Historic District between West 105th & West 106th Streets, including 101-137 and 120-140 Manhattan Avenue was designated by the New York City Landmarks Preservation Commission on May 15, 2007.[8]