Delancey Street – Essex Street is a station complex shared by the BMT Nassau Street Line and the IND Sixth Avenue Lines of the New York City Subway, located at the intersection of Essex and Delancey Streets on the Lower East Side of Manhattan, just west of the Williamsburg Bridge. It is served by:

In addition to the two track levels—the BMT platforms are on the upper level and the IND platforms are on the lower—an intermediate mezzanine built for the IND platforms provides the passenger connection between the two lines. As the BMT and the IND were originally separate systems, the transfer passageway was not within fare control until July 1, 1948.[citation needed] The full-time entrance is on the north side of Delancey Street, on either side of Essex Street.

Essex Street on the BMT Nassau Street Line has three tracks, one side platform, and one island platform. Trains coming from the Williamsburg Bridge use the side platform. The other two tracks serve the island platform. The middle track, which was formerly the peak-direction express track, is now used for northbound J and Z trains over the Williamsburg Bridge. After a 2004 reconfiguration, the former northbound local track was taken out of regular service. It was only used for special reroutes from Chambers Street until 2010. The Chrystie Street Connection between Broadway-Lafayette and Essex Street was not used for regular revenue service from 1976 to 2010. It was re-activated in June 2010 with the re-routing of the M train to the IND Sixth Avenue Line and IND Queens Boulevard Line. The M uses the outer local track to get from the Chrystie Street connection to the Williamsburg Bridge.

The island platform is much longer than other stations in the BMT Eastern Division, which are normally 480 feet in length and can only accommodate eight car trains. As a result, the signals are placed on the platform rather than in the tunnels.

Next to the Brooklyn-bound local track is a closed trolley terminal. There are about three to four tracks against a wall and eight turning loops, which were used for trolley service from 1908 to 1948 that traveled over the Williamsburg Bridge to different parts of Brooklyn.[3]

The underground terminal for the subway adjacent to the trolley terminal opened on September 16, 1908. The station was rebuilt for through service in 1911-1913 to the Centre St Subway extending to Chambers St. The subway has four tracks while there was room at Essex St station for only three tracks and two platforms. There is provision for a fourth track to run through the trolley terminal area and join the subway west of the trolley terminal, should a four track subway station be wanted. For many years, the elevated train service was very intensive and a fourth track at Essex St would have been useful to handle the crowds, but at the same time the trolley service was also well patronized, so no expansion was ever proposed.

After streetcar service ended in 1948, the former track area on the bridge was rebuilt into auto lanes with a new ramp from street level closing off the former downhill ramp to the trolley terminal. The trolley terminal itself however was left vacant, and only small portions converted to storerooms. Prior to 1913, the BMT station was also known as Delancey Street.

Delancey Street on the IND Sixth Avenue Line has two tracks and two side platforms. The station has a part-time booth on the south side of Delancey Street and has two street staircases. Crossovers connect both platforms to the BMT platforms, which are above and perpendicular to the IND platforms. There were formerly exits at both the north end of the station at Rivington Street) and the south end at Broome Street. Twelve staircases, six on each side, led to the Rivington and Broome Street exits. They were all removed. Only the staircase at the southeast corner of Rivington and Essex Streets remains, but it is only used for storage. This staircase is easily identifiable, as it is adjacent to the rear of the Essex Street Market building. The tile band (purple with black border) and station name tablets have been replaced, replicating the style of the original design. In a departure from the norm of recent restorations, every other column at platform level has a large "D" for the station name.

There are two large wall-sized pieces of artwork, one on each wall where the staircase exits and transfers are located. The artist for both glass mosaics is Ming Fay (2004).

The artwork on the downtown side is titled Shad Crossing and details two giant shad fish swimming, along with another wall mosaic of blue waters. In the late 19th century, shad were found along the Hudson River when new immigrants came to New York, many of whom settled on the Lower East Side. The new staircase to the relocated full-time booth also has another painting of a shad wrapped around the bottom of the stairs. 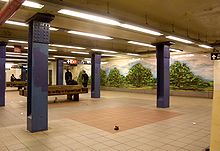 The uptown side is titled Delancey Orchard and has a cherry orchard tree mosaic, which symbolized the tree owned by the Delancey family in the 18th century. Miniature versions appear along all staircases leading from the Delancey Street platforms to either fare control.