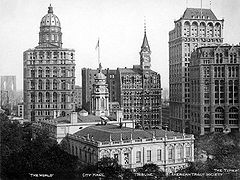 Newspaper Row, before 1903 (the original Tribune Building from 1875 in the center)

Park Row is a street located in the Financial District of the New York City borough of Manhattan. It was previously called Chatham Street[1] and during the late 19th century it was nicknamed Newspaper Row, as most of New York City's newspapers located on the street to be close to the action at New York City Hall.[2]

The image is of Park Row around the turn of the 20th century. The buildings from left to right include; Bottom-Left is New York City Hall; the New York World Building, also known as the Pulitzer Building (with the spherical top) which housed the New York World newspaper (now the site of one of the Brooklyn Bridge entrance ramps); The New York Tribune building with the spire top (today the site of the Pace Plaza complex of Pace University); The New York Times Building (the 19th Century home of The New York Times, today one of the buildings of Pace University); and to the far right - cut off from the picture - the Potter Building.

The New York Times was originally located at 113 Nassau Street in 1851. In 1854, it moved to 138 Nassau Street, and in 1858 it moved a little more than one block away to 41 Park Row, making it the first newspaper in New York City housed in a building built specifically for its use.[3]

This section of the street was known as 'Printing House Square'. Today, a statue of Benjamin Franklin stands there, in front of the One Pace Plaza and 41 Park Row buildings of Pace University, holding a copy of his Pennsylvania Gazette, a reminder of what Park Row once was.

In the late 18th century Eastern Post Road became the more important road connecting New York to Albany and New England. Early in the 19th century most of the Manhattan portion of this road was suppressed, the Commons became City Hall Park, and the stub then known as Chatham Street was renamed Park Row.

The New York City Police Department is headquartered at 1 Police Plaza located on Park Row, across the street from the Manhattan Municipal Building.[4]