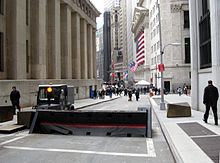 South end of Nassau Street; Federal Hall is on the left, the New York Stock Exchange is in the distance on the right 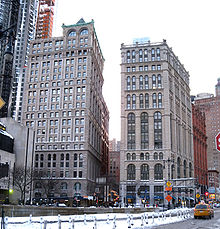 Nassau Street is a street in the Financial District of the New York City borough of Manhattan, located near Pace University and New York City Hall. It starts at Wall Street and runs north to Frankfort Street at the foot of the Brooklyn Bridge, lying one block east of Broadway and east of Park Row. It is named after the Royal family of the Netherlands: Oranje-Nassau.

Nassau Street once housed many of the city's newspapers. Late in the 20th century Nassau Street was closed to motor traffic in order to promote shopping.

Nassau Street borders on the Fulton-Nassau Historic District, which is bounded by Broadway and Park Row, Nassau, Dutch and William Sts, Ann and Spruce Sts. and Liberty St.

The first building of The New York Times — then the New-York Daily Times — was located at 113 Nassau Street. In 1854, the paper moved to 138 Nassau Street, and in 1858 it moved to Park Row, making it the first newspaper in New York City housed in a building built specifically for its use.[1]

As early as 1915, Mekeel's Weekly Stamp News contained many advertisements for stamp dealers in Nassau Street.[2] In the 1930s, stamp collecting became very popular and Nassau Street was the center of New York City's "Stamp District", called its "Street of Stamps", with dozens of stamp and coin dealers along its short length.[3] While the stock market did poorly during the Great Depression, stamps kept their value and were "negotiable assets."[3] The Stamp Center Building was located at 116 Nassau Street, and the Subway Stamp Shop (now in Altoona, Pennsylvania) was located at 87 Nassau Street.[3] With the dispersal of most dealers in the 1970s, a process that accelerated with internet trading, the street no longer has this character.[4][3]

Nassau Street was also the title of a book written in the 1960s by Herman Herst Jr.[5] that described the "golden age" of the stamp collecting industry.[3]