Eleventh Avenue is a north-south thoroughfare on the far West Side of the borough of Manhattan in New York City, not far from the Hudson River. It carries downtown (southbound) traffic only, south of West 44th Street, and two-way traffic north of it.

Eleventh Avenue originates in the Meatpacking District in the West Village neighborhood, near the corner of West 14th Street, and runs uptown (northward) until its intersection with West 59th Street, where West End Avenue begins. 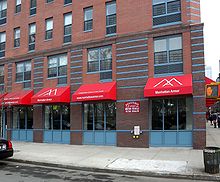 The West Side Line of the New York Central Railroad once had on-street running along part of Eleventh Avenue, popularly called "Death Avenue".[1]

The segment between approximately West 39th Street and West 59th Street is home to the largest concentration of auto dealerships in Manhattan. Mercedes-Benz is located across from the westbound Lincoln Tunnel Portal, with BMW and Lexus at the intersection with West 57th Street. Manhattan Motorcars (located at 270 Eleventh Avenue) is New York City's official Lamborghini, Bentley, Rolls-Royce, Spyker Cars, Porsche, and Lotus dealership. As well, numerous vehicle service stations, car washes, and car rental lots are found along this stretch. This area has served the transport trade for more than a hundred years; most of the stables for New York's remaining horse cabs are located on its side streets, though many now store taxis and pedicabs.

West End Avenue in the 60s has mixed commercial and residential use, while the northern two miles (3 km) are a sedate residential street.

In 1934, a bill was passed for the Henry Hudson Parkway to be constructed, meant to be an alternative route to "Death Avenue".

Points of interest on or within one block of Eleventh Avenue