Orchard Street close to Rivington Street, to the right is the old headquarters of S. Beckenstein (2010) 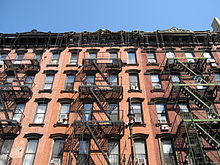 Close-up of some of the old tenement houses

Orchard Street is a street in Manhattan which covers the eight city blocks between Division Street in Chinatown and East Houston Street on the Lower East Side. Vehicular traffic runs north on this one-way street.

The orchard in question belonged to James Delancey, who returned to England in 1775, and his farm was declared forfeit.[1]

Orchard Street is often considered the center of the Lower East Side and is lined end to end almost entirely with low-rise tenement building with the iconic brick face and fire escapes. First known as Kleindeutschland, or "Little Germany," later a Jewish enclave, the neighborhood has been home to first generation immigrants from the mid 19th Century to the present day. The street's past as the heart of the immigrant experience is captured at the Lower East Side Tenement Museum's centerpiece, the restored 97 Orchard Street tenement.

The street is known for its discount shopping - Orchard Street was long the Lower East Side's main marketing thoroughfare. There are several lingerie shops and Orthodox Jewish-owned men's suit stores below Delancey Street, while discount clothing and luggage stores dominate the block between Delancey and Rivington Streets. More recently, upscale boutiques and designer shops have begun to line the street. Every Sunday, Orchard Street from Delancey to East Houston Street closes to vehicular traffic turning the street into a pedestrian mall with stores setting up tables and racks advertising their wares to passersby.

Like the rest of the Lower East Side, Orchard Street has gone through gentrification in the past decade, especially above Rivington Street, where boutiques and upscale restaurants have opened shop.

The transition has been slower on the lower end of the street, especially below Grand Street, which is part of Chinatown's industrial east end, but new restaurants, bars and art galleries have opened in this area in recent years as well.

Meanwhile, several luxury condominiums now stand or are under construction where immigrant families once shared quarters in cramped tenement buildings. Several boutique hotels have also sprouted in the area, with two on Orchard St; the Blue Moon Hotel at 100 Orchard St, and Thompson LES on Allen St.