Jean Nouvel (French pronunciation: [ʒɑ̃ nu.vɛl]) (born August 12, 1945) is a French architect. Nouvel studied at the École des Beaux-Arts in Paris and was a founding member of Mars 1976 and Syndicat de l'Architecture. He has obtained a number of prestigious distinctions over the course of his career, including the Aga Khan Award for Architecture (technically, the prize was awarded for the Institut du Monde Arabe which Nouvel designed), the Wolf Prize in Arts in 2005 and the Pritzker Prize in 2008.[1][2][3][4] A number of museums and architectural centres have presented retrospectives of his work.[5][6] 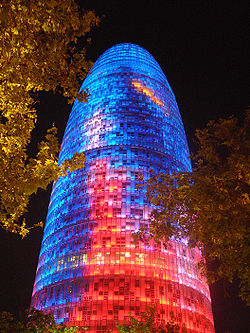 Nouvel was born August 12, 1945, in Fumel, Lot-et-Garonne, France, the son of Renée and Roger Nouvel who were teachers. His family moved often when his father became the county's chief school superintendent. His parents encouraged Nouvel to study mathematics and language, but when he was 16 years old he was captivated by art when a teacher taught him drawing. Although he later said he thought that his parents were guiding him to pursue a career in education or engineering, the family reached a compromise that he could study architecture which they thought was less risky than art.[4]

When Nouvel failed an entrance examination at the École des Beaux-Arts of Bordeaux, he moved to Paris where he won first prize in a national competition to attend the École nationale supérieure des Beaux-Arts. From 1967 to 1970, Nouvel earned his income as an assistant to architects Claude Parent and Paul Virilio, who after only one year, made him a project manager in charge of building a large apartment complex.[4]

Nouvel and filmmaker Odile Fillion married and have two sons, Bertrand, who is a post-doctorate computer scientist working at the University of Chiba in Japan, and Pierre, who is a theater producer and designer at his company, Factoid. With his second wife Catherine Richard, Nouvel has a daughter, Sarah. He lives now with Mia Hägg, who is a Swedish architect working at her practice Habiter Autrement (HA) in Paris.[4]

By age 25, Nouvel completed school and entered into his own partnership with François Seigneur. Parent sent them work, and gave Nouvel a valuable recommendation to the directorship of the seventh edition of the Biennale de Paris[5] where for fifteen years, Nouvel designed exhibits and made contacts in the arts and theater.[4] Soon into his career, Nouvel became a key participant in intellectual debates about architecture in France: he co-founded the Mars 1976 movement in 1976 and, a year later, the Syndicat de l'Architecture. Nouvel was one of the organizers of the competition for the rejuvenation of the Les Halles district (1977) and he founded the first Paris architecture biennale in 1980.

Nouvel had three different partners between 1972 and 1984: Gilbert Lezenes, Jean-François Guyot, and Pierre Soria. In 1985, with his junior architects Emmanuel Blamont, Jean-Marc Ibos and Mirto Vitart, he founded Jean Nouvel et Associés. Then, with Emmanuel Gattani, he formed JNEC in 1988. Ateliers Jean Nouvel, his present practice, was formed in 1994 with Michel Pélissié and is one of the largest in France, with 140 people in the main office in Paris. Ateliers Jean Nouvel site offices are in London, Copenhagen, New York, Rome, Madrid and Barcelona. As of 2008, they are working on 40 active projects in 13 countries.[4] Nouvel designed a flacon for L'Homme, an Yves Saint Laurent fragrance, in a limited edition launched in 2008.[7] 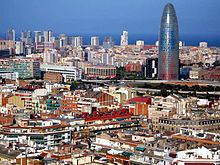 Torre Agbar (2005, upper right) in Barcelona is one of Nouvel's most famous recent buildings.

Nouvel was awarded the Pritzker Prize, architecture's highest honour, in 2008, for his work on more than 200 projects,[8] among them, in the words of The New York Times, the "exotically louvered" Arab World Institute, the bullet-shaped and "candy-colored" Torre Agbar in Barcelona, the "muscular" Guthrie Theater with its cantilevered bridge in Minneapolis, and in Paris, the "defiant, mysterious and wildly eccentric" Musée du quai Branly (2006) and the Philharmonie de Paris (a "trip into the unknown" c. 2012).[3][8]

Pritzker points to several more major works: in Europe, the Cartier Foundation for Contemporary Art (1994), the Culture and Convention Center in Lucerne (2000), the Opéra Nouvel in Lyon (1993) , Expo 2002 in Switzerland and, under construction, the Copenhagen Concert Hall and the courthouse in Nantes (2000); as well as two tall towers in planning in North America, Tour Verre in New York City and a cancelled condominium tower in Los Angeles,[4]

In its citation, the jury of the Pritzker prize noted:

Of the many phrases that might be used to describe the career of architect Jean Nouvel, foremost are those that emphasize his courageous pursuit of new ideas and his challenge of accepted norms in order to stretch the boundaries of the field. [...] The jury acknowledged the ‘persistence, imagination, exuberance, and, above all, an insatiable urge for creative experimentation’ as qualities abundant in Nouvel’s work.[4]

Nouvel has designed a number of notable buildings across the world, the most significant of which are listed below. As part of the announcement of Nouvel's Pritzker Prize, the Hyatt Foundation, which awards the prize, published a full illustrated list of Nouvel's architectural work, including projects which were never built, projects in construction and designs for which construction has yet to start.[9][10] In 2001 director Beat Kuert filmed a documentary about five of Nouvel's projects titled Jean Nouvel. 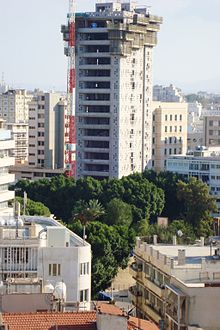 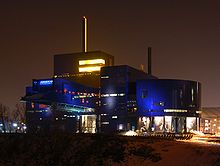 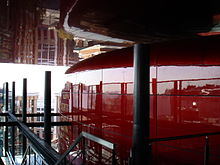 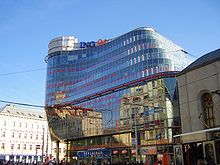 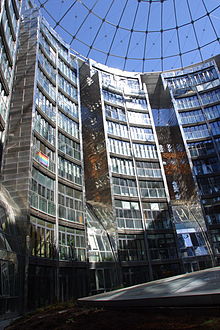 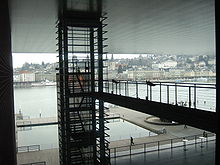 Culture and Convention Center (2000) in Lucerne 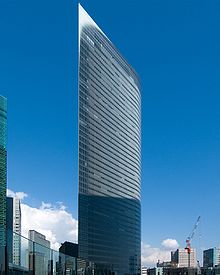 Nouvel and the buildings which he designed have received a number of distinctions during his career, the most prestigious of which are listed below.