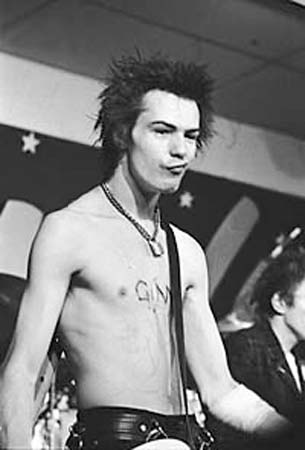 John Simon Ritchie (born , , died , ), better known as Sid Vicious, was an English , who played bass guitar for the (replacing ).

Sid Vicious was born in to John and Anne Ritchie. Anne was more of the hippie-type, whereas his father was a guard at . [The Filth and The Fury, St. Martin's Press, 2000, pg. 13] Shortly after his birth, John Ritchie left the family. John ("Sid") and his mother moved to the island of . She married Christopher Beverly in 1965 before setting up a family home back in . His stepfather died six months later, and by 1968 Ritchie and his mother were living in a rented flat in Tunbridge Wells where he attended Sandown Court School. In 1971 the pair moved to Hackney in East London. He also spent some time living in where he was a pupil at Clevedon Secondary Modern.

According to the band's photographer, , Ritchie was "deep down, a shy person." [ [http://www.hotshotdigital.com/WellAlwaysRemember.2/SidViciousBio.html Sid Vicious Biography - hotshotdigital.com ] ] However, he did "" journalist with a motorcycle chain with help from . [ [http://www.guardian.co.uk/music/musicblog/2008/jan/08/musicalhackattacks The Guardian] ] On another occasion, at The Speakeasy (a London nightclub popular with rock stars of the day) he threatened DJ and presenter Bob Harris, which in turn resulted in Harris threatening him with legal action.Fact|date=April 2008 However, Vicious was a poor fighter, at various times being beaten up by Paul Weller, , and guitarist , who battered him with a clog inside a boat. Bouncers and audiences also assaulted Sid at times.

Ritchie was given the nickname "Vicious" , not Sid, by , after Lydon's pet . The hamster had bitten Ritchie, who said that " [Rotten's] Sid is really vicious!" [The Filth and the Fury, St. Martin's Press, 2000, pg. 90] The animal was described by Lydon as "the softest, furriest, weediest thing on earth."

According to John Lydon, the two of them would often busk for money with Sid playing the tambourine. They would play covers and people gave them money to be quiet. [The Filth and The Fury, St. Martin's Press, 2000, pg. 41]

The Flowers of Romance, and The Banshees

Vicious began his musical career in 1976 as a member of The Flowers of Romance along with former co-founding member of , (who later co-founded John Lydon's post-Pistols project ) and Palmolive and , who would later form . He appeared with , playing drums at their notorious first gig at the in London's . According to the Documentary "Final Damnation", Sid, along with Dave Vanian, was considered for the position of lead singer for the , but failed to show up for the audition. Fact|date=July 2008

Before joining the band, Sid had associations with , the fashion that followed the Sex Pistols. According to various publications (such as Lydon's autobiography, England's Dreaming by John Savage) and films (namely ) Ritchie was asked to join the group after 's departure in February 1977 due to his being present at every gig. Manager once claimed "if Rotten is the voice of punk, then Vicious is the attitude". Alan Jones described Sid as " [having] the iconic punk look (...) Sid, on image alone, is what all punk rests on." [ [http://www.amazon.com/Punk-Definitive-Revolution-Stephen-Colegrave/dp/1560257695/ref=sr_1_1/102-3759739-4005708?ie=UTF8&s=books&qid=1191184622&sr=8-1 Amazon.com: Punk: The Definitive Record of a Revolution: Stephen Colegrave, Chris Sullivan: Books ] ] His nails would be painted in a sloppy manner with purple nail polish [The Filth and The Fury, St. Martin's Press, 2000, pg. 39] . Ritchie played his first gig with the Pistols on April 3, 1977, at the in London. His debut was filmed by and appears in "".

In November 1977, Ritchie met American , and they immediately began a relationship (Spungen had come to London looking for of ). She was a addict, and Ritchie, who already believed in his own "live fast, die young" image, soon shared the dependence. Although they were deeply in love, their often violent and rocky relationship had a disastrous effect on the Sex Pistols. Both the group and Ritchie visibly deteriorated during their 1978 American tour. The Pistols broke up in after their concert at the on January 14, 1978. With Spungen acting as his "manager," Ritchie embarked on a solo career during which he performed with musicians including Mick Jones of , original Sex Pistols bassist , of and the ' , , and . Ritchie performed the majority of his solo performances at and drew large crowds. His final performances as a solo musician took place at Max's. [cite web|title=Sid Vicious and the Sex Pistols Bring The Filth and the Fury|publisher=Max's Kansas City|url=http://www.maxskansascity.com/punk|accessdate=2008-09-17]

Sid was not recognised as a competent bass player. During an interview for "", when Sex Pistols guitarist Steve Jones was asked why he instead of Vicious recorded the bass parts of "", Jones responded "Sid was in a hospital with so he couldn't really play, not that he could play anyway". [ [http://youtube.com/watch?v=1lJU_QxY8Kc&feature=related Guitar Hero III: Sex Pistols Trailer] ] At times during performances, other band members would unplug Sid's bass because his playing was so bad.

In light of such comments and tales it is rarely acknowledged that early on, Sid's playing did reach a level of competency. In the few months between joining the band and meeting Nancy, he was a dedicated worker and tried his hardest to learn to play. Audio from his first show at the Screen on the Green (roughly two months after joining) demonstrates that he was able to hold a tune, and he is even heard to pull off a 'run' during the intro to "God Save the Queen". His progression eventually halted; the audio from the final Winterland concert shows him playing appallingly, his fingers rendered sluggish and clumsy through intoxication and lack of interest.

Ritchie and girlfriend became locked in their own world of drug addiction and self-destruction. [http://www.youtube.com/watch?v=raEXGXw5VJM Interview footage] shows the couple attempting to answer questions from their bed; Spungen's speech is very slurred while Ritchie lapses in and out of . He came very close to death following a heroin overdose and was hospitalised for a time. On the morning of , he claimed to have awoken from a drugged stupor to find Spungen dead on the bathroom floor of their room (number 100) in the in . She had suffered a single stab wound to her and apparently bled to death. On he was arrested and charged with her murder. He claimed to have no memory of the event.

There are theories that Spungen was murdered by someone else:By one of two drug dealers who visited the apartment that night, possibly involving a robbery as items (including a substantial bankroll) were claimed to be missing from the room. In his book, "Pretty Vacant: A History of Punk", names Spungen's alleged killer as actor and stand-up comic . Redglare had delivered 40 capsules of to the couple's room at the Chelsea Hotel the night Nancy was killed. fix|link=Wikipedia:Citation_needed|text=citation neededIt was also unusual that Neon Leon had Sid's leather jacket and two gold records in his room. He said he had been given them by Sid for safe keeping on the night of October 11/12, 1978. [Source: Police report.]
of $50,000 was arranged by Sid's mother. In order to raise funds for his defence, it was planned for Vicious to record an album with fellow Pistols Steve Jones and . This was to be a collection of standards, which according to McLaren would include; "White Christmas" and "".

On October 22 (10 days after Nancy's death) Sid attempted suicide by cutting his arm extensively and subsequently became a patient at Bellevue Hospital for some time. Some time after leaving hospital he was charged with assault for smashing a beer mug in the face of 's brother, Todd Smith. He was arrested and sent to jail for 55 days. He was released on bail February 1-2, 1979.

You were my little baby girl
And I shared all your fears
Such joy to hold you in my arms
And kiss away your tears
But now you're gone there's only pain
And nothing I can do
And I don't want to live this life
If I can't live for you
To my beautiful baby girl
Our love will never die.

On , , a small gathering to celebrate his bail was held at the home of his new girlfriend, Michelle Robinson, with whom he'd started living the day he got out of the previous October. Ritchie was clean, having been weaned off during his time at jail. However, at the dinner gathering, he obtained some heroin and that night he . Robinson revived him. [cite web|url=http://news.bbc.co.uk/onthisday/hi/dates/stories/february/2/newsid_2523000/2523601.stm|title=BBC ON THIS DAY | 2 | 1979: Sid Vicious dies from drugs overdose] Much later that night, the couple fell asleep together. Vicious was discovered dead the next morning. As New York Chief Coroner explained at the time, when a person has a heroin overdose, and then falls asleep, their heart slows with every REM phase. Sid Vicious died at around 10:00 a.m., after the repeated REM phases throughout the night. Forensic experts subsequently found the heroin was 80 percent pure, as opposed to the 5 percent that was normal for the time and in that area, and because he had not been using since October his tolerance was greatly lowered. On HBO's "," Dr. Baden claims Vicious' lungs were filled with fluid and water, which is common for someone who has overdosed on heroin. Ultimately, Vicious drowned in his own fluids.

Films that include Sid Vicious

A fictionalised film about the relationship between Vicious and Spungen, "", was made by director in 1986, starring as Vicious, although this film is often criticised for containing many historical inaccuracies.Fact|date=January 2008
played Vicious in "The Comic Strip Presents: Demonella". He is shown in Hell, accompanied by , , , and .

portrayed Vicious in a skit on the sketch comedy series The State.

An episode of tells a fictionalised tale of Sid and Nancy as a Valentine's Day spoof.