Michael Geoffrey "Mick" Jones (born 26 June 1955) is the former lead guitarist, secondary vocalist and co-founder for the British punk rock band The Clash until his dismissal in 1983. He went on to form the band Big Audio Dynamite with Don Letts before line-up changes led to the formation of Big Audio Dynamite II and later Big Audio. He now plays with Carbon Silicon along with his lifelong friend, Tony James and is currently touring the world as part of the Gorillaz live band (which also includes former Clash member Paul Simonon).

Jones was born in Brixton, South London, England to a Welsh father and a Russian Jewish mother.[1] He spent much of his early life living with his maternal grandmother, Stella, in South London. Jones' cousin is Grant Shapps, the Conservative MP for Welwyn Hatfield.[2] Jones went to Strand School – and then on to art school, because "[he] thought that's how you get into bands and stuff".[3]

He started gaining recognition as a guitarist in the early '70s with his glam rock band, The Delinquents. A short time later, he met Tony James and formed the proto-punk London SS. By 1976, that band had broken up and remaining members Jones, Paul Simonon and Keith Levene were seeking a new direction.[5]

Mick Jones (centre) on stage with The Clash

When he was 21, he and Paul Simonon were introduced to Joe Strummer by Bernie Rhodes (the self proclaimed inventor of punk rock)[6] in a dirty squat in Shepherd's Bush. The band practised in a disused railway warehouse in Camden and The Clash was formed. Jones played lead guitar, sang, and co-wrote songs from the band's inception until he was fired by Strummer and Simonon in 1983. Jones' lack of punctuality played a major role in his dismissal from the band.

For his time with The Clash, Jones, along with the rest of the band, was inducted into the Rock and Roll Hall of Fame in 2003.[7]

After his expulsion from The Clash, Jones was briefly a founding member of General Public. Though he's listed in the credits of the band's 1984 début album All the Rage as an official member, Jones actually left General Public part way through the recording process and was replaced by Kevin White. White's picture appears on the back cover; Jones' picture does not. Jones did play guitar on many of the album's tracks, including the North American top 40 single "Tenderness".

Leaving General Public behind, in 1984 Jones formed Big Audio Dynamite with film director Don Letts, who had directed various Clash videos and later the Clash documentary Westway to the World. The band's début album This Is Big Audio Dynamite was released the following year, with the song "E=MC²" getting heavy rotation in dance clubs, and both singles "Medicine Show" and "E=MC2" charting in the UK.

For Big Audio Dynamite's second album, No. 10, Upping St., Jones reunited with Strummer. Together, the two wrote several songs on the album, including "Beyond the Pale", "V. Thirteen", and "Sightsee M.C."; Strummer also co-produced the album. Their reunion did not last long, and following that collaboration, the two did not work together again for some time.

The band's line-up was reshuffled again in 1994, and they released the album Higher Power under the name Big Audio. In 1995, a greatest hits album, Planet B.A.D. was released as well as a studio album called F-Punk under the original Big Audio Dynamite name. A further album, Entering a New Ride was recorded in 1997, but was only released on the internet because of a disagreement with Radioactive Records, their then record label. One more "best of" collection, called Super Hits, was released in 1999.

Jones announced the reuniting of Big Audio Dynamite in January 2011. 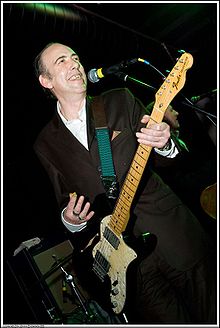 In 2002, Jones teamed up with his former London SS colleague, Generation X and Sigue Sigue Sputnik member, Tony James to form a new band named Carbon/Silicon. The band has toured the United Kingdom and the United States and has performed a number of anti-fascist benefit concerts; they have also recorded three albums: A.T.O.M, Western Front and The Crackup Suite which were available on-line for free. Their first physical CD release was The News EP. The band encourage their fans to share their music on P2P networks, and allow the audio and video taping of their shows. Their first song, "MPFree" is an anthem for P2P file sharing.

Similar in many respects to Jones' earlier work in Big Audio Dynamite, Carbon/Silicon aims to break the traditional approach to rock and roll. The band was described by Alan McGee as "...the Stones jamming with a laptop," and they make use of samples in their recordings and live shows. The formation of the band was catalysed by the internet and p2p file sharing. The first song written by Jones and James was entitled "MPFree," in which they expressed their willingness to embrace the technology of the internet and file sharing, in the interest of spreading music, rather than profit.

On seven consecutive Friday nights in January and February 2008 Carbon/Silicon played a series of gigs at the Inn On The Green, right under the Westway in Thorpe Close, between Ladbroke Grove and Portobello Road. As well as Carbon/Silicon there were many special guests, including appearances by Sex Pistols' Paul Cook and Glen Matlock, former Clash drummer Topper Headon and multi-instrumentalist and former Mescalero, Tymon Dogg.

Jones has also been an occasional producer. In 1981 he produced Ellen Foley's second album The Spirit of St. Louis. Jones was in a relationship with Foley, and co-wrote songs for the album with Strummer. Players on the album included members of The Blockheads and all four members of The Clash[10]

In 1981 Jones also produced Theatre of Hate's first album Westworld released in 1982, written by Kirk Brandon. Jones also played guitar on the title track, "Do You Believe In The Westworld". Jones would also record and produce Aria of the Devil in 1982 by Theatre of Hate at Wessex Studios, which did not get released until 1998, when the master tapes were found by Kirk Brandon.

He produced the London-based band The Libertines' debut album Up The Bracket (2002). The album was critically well received, both in the UK and US. Jones stayed on to produce the band's second and final album The Libertines. He also produced Down In Albion, the debut album of former Libertines lead singer and guitarist Pete Doherty's new group Babyshambles.

At the NME Shockwave 2007 awards, Jones took to the stage and performed "(White Man) In Hammersmith Palais" with Primal Scream.[11]

Richard Archer of Hard-Fi first met Mick Jones when he was still with Contempo. Hard-Fi were looking for a producer when one of the members of the record company suggested Jones, to which the band agreed to. At a rehearsal in Putney, Richard compared his dress sense to that of "the Godfather".[12][13]

Archer worked for a year on the band's first record, but things didn't work out as planned because of problems with the record company.[12][13]

"I guess I can have a lot of fun at this stage in my career and I like working with young people such as Rich because they're full of new ideas. I wouldn't say I'm a mentor to him, though. I just like to try to have some fun and play a few tunes.[12][13]

At Hard-Fi's NME Awards show at the Koko club on 6 February 2008 Jones appeared with Hard-Fi to perform the Clash's "Should I Stay or Should I Go" and Hard-Fi's "Stars of CCTV".

Mick Jones and Paul Simonon are now working as executive producers for a new film based on the recording of The Clash classic 1979 album London Calling.[14][15] 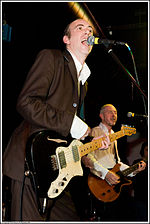 Jones' first guitar was a Gibson Les Paul Junior with a P-90 pick-up, which he bought because Johnny Thunders used one. The Junior was his main guitar up until late 1977 early 1978, and after that as a backup and studio-guitar. Around the same time he also owned another Les Paul Junior, all black (formerly red) with a black pick-guard, which got smashed at a gig in 1977. He then switched to the regular Gibson Les Paul and later to Gibson Les Paul Customs.

"My favourites are still the Juniors," he told Gibson.com in 2006. "I had a great Les Paul Standard, a sunburst one. And then I had a black Custom, and a white Custom. And then the big white hollowbody for London Calling. But I still play the Juniors today."

He also occasionally played an Olympic White Fender Stratocaster – for live versions of 'Straight to Hell' – and several Bond Guitars that were donated to him by good friend Andrew Bond, who made the guitars. For effects Jones mainly uses MXR pedals including a 100 Phaser, a Flanger, an Analog Delay and a Noisegate as well as a Roland chorus or Space Echo effect.[16] During his days with The Clash, Jones used a Marshall Plexi amplifier and occasionally a Fender Twin with a 2x12 cabinet. He later changed to Mesa Boogie amplifier with two Marshall 4x12 cabinets that he used throughout the rest of his career with The Clash.[17][18]

Jones played a high-tech British-made guitar called the Bond Electraglide with Big Audio Dynamite. He wears it on the cover of No. 10, Upping St..